It is difficult to be too hard on a cast recording when it features a score by musical theater newbies.  It is also difficult to really assess the performances when some of the cast has acted in the show that they are singing, while others who haven't may not have a handle on the characters out of context.  Then there is the fact that I, myself, haven't seen the show, and need to rely on the synopsis to understand what is going on.  And, while I applaud the recording of any score that has potential, even if it hasn't gone beyond regional productions, there are orchestral limitations that need to be considered.  In the case of Meet John Doe, all of these issues have informed the review I have given below. 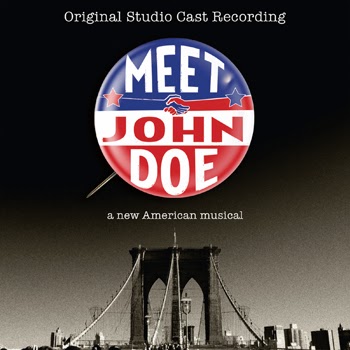 Production values: As always, the folks over at Broadway Records have done a superlative job packaging this disc.  With a booklet that features full color production photos and complete lyrics, one wishes all cast recordings got such amazing treatment.  There is also the invaluable plot synopsis, which is very detailed and especially helpful in understand the story that goes with the score.  I imagine that all of these factors will make this an invaluable marketing tool for future productions.

An all-star cast: A top-notch cast of Broadway singers has been assembled for the recording, including Meet John Doe alumni Heidi Blickenstaff and James Moye in the lead roles.  Robert Cuccioli, John Jellison, Joel Blum and Andrew Keenan-Bolger Broadway regulars all, round out the supporting roles.  There is no doubt that the vocal quality is quite good - including the small ensemble of singers. 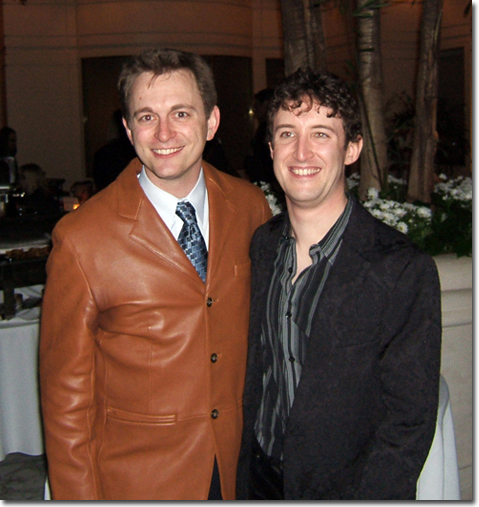 Enthusiastic new composers: Andrew Gerle and Eddie Sugarman reference the film on which this property is based (Frank Capra's Meet John Doe) mentioning that they saw the movie some ten years ago.  These fresh faces must have been young teens when that happened, by the look of the photo included in the booklet.  Winners of the Jonathan Larsen Award, they write of wanting to write a "snazzy Big Band" score.  They kindly express gratitude for all of the theaters and major players that have figured into the gestation of the piece, including the "Doe-nuts," a group of fans who apparently helped to get this recording made.  Their love and enthusiasm for the piece jumps right off the page.  How can any self-respecting musical theatre fan not root for these guys?  I certainly do.

Production values: I realize that this is a studio cast recording and budgets are tight, likely not allowing for a fuller orchestra, and I can tell that the most has been made out of the five piece band assembled.  And while I can recognize that somewhere in there is the "snazzy Big Band" sound, the result is not always pleasing to the ear.  The horns are particularly grating throughout (when I played this at work my co-workers asked me to put my headphones on, a first).

An all-star cast: I certainly can't quibble with the sound of the cast.  Ms. Blickenstaff is a particular asset (as always), and Mr. Moye is more than compelling - both have starred in the show previously.  But one can't tell from the rest of the company just how well they handle their roles.  Are they being overly dramatic? Are some of the songs meant to be comic relief?  Are they playing types?  It is hard to tell - well-sung doesn't always mean well-interpreted. 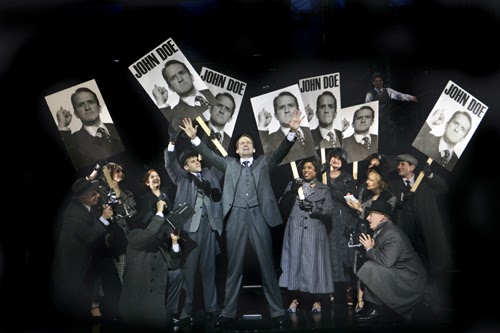 Enthusiastic new composers: The music is the strongest part of this score.  It is continuously challenging, mostly period appropriate, and usually interesting.  But, as is often the case with newer writers, the piece - after several listenings - seems to suffer from an identity crisis.  Yes, there are the "snazzy Big Band" songs, but after a while they all sound the same.  There's no real change in tone, even though there are the typical mood/theme setting group numbers, the power ballads, and the conflict-heavy duets.  They seem to have gone out of their way to embrace the kind of themes and characterizations so prevalent in the films of the period that this is based on.  Everything here is black and white, no pun intended: the brassy gal who wants to succeed in a man's world (Barbara Stanwyck played the lead in the movie), the moralistic good guys, the evil wealthy man in power, and a good guts gotta win conflict.  But Gerle and Sugarman cling to these thins a little too tightly, with little (from the lyric alone, anyway) that reveals any universality or any interesting nuances to these characters.  I would applaud them, at least, for taking a property and consistently sticking to it.  I would, except that the score sometimes veers off into the complexities of the modern American musical.  Picture a cross between Sondheim's politics of Assassins, Cy Coleman's brassy City of Angels and the play The Front Page, all with a wannabe LaChiusa bent.  I just don't think these guys are up to the task of making all of that gel.  Actually, I think it could work - heck, if Marvin Hamlisch couldn't get it totally right with The Sweet Smell of Success, why expect as much from these fresh-faced guys?  Like I said...identity crisis.

Colleges and dinner theaters looking for a solid show with political and media-in-crisis themes will find that Meet John Doe might fit their needs nicely.  And musical theater fans will want to give this a listen, because I have a feeling the names Andrew Gerle and Eddie Sugarman will be on everyone's list in no time at all.  Despite my misgivings about this particular work, I am hopeful for their future!