I have long said that a show logo - especially for a brand new show not based on a known property - can make or break interest in it.  So I read with great interest the message boards that discussed the release of both the logo and the new photo version of the logo for If/Then.  If those discussions are any measure of the success of the marketing thus far, the people working this show might do well to listen to what people are saying.

Even if you discount those posts that are clearly meant to ruffle feathers (the Idina-haters, the next to normal-haters, the people who have already dismissed the piece without having seen it, etc.), when you hear comments like, "it is as confusing as the plot," and "why is Idina in each photo twice?" it may be time to re-evaluate.

That said, I don't find the logo or the pictures particularly unattractive or confusing.  In fact, I find it colorful, informative and thought-provoking.  But you can't discount the public at large, so I can't give the logo my highest score.

First of all, the colors of the logo are an intriguing choice.  Muted yellows, oranges and deep purples are not a combination used very often in a show logo, making them stand out from the rest of the Times Square din.  Still, the muted colors could blend in rather than stick out - unless you always get it positioned next to the artwork for Pippin, which goes with it reasonably well.

The font, strong and plain states simply that the show is a modern one, and, of course, "Idina Menzel" in huge letters above the title plays to one of the show's biggest strengths for the public at large.  I'm surprised that, so far, anyway, they haven't much touted her being in Wicked or Frozen in all of the primary ads.  Meanwhile, those ads that mention the relation of the team and cast to next to normal and RENT are clearly aimed at contemporary theatre audience.  It is also telling of the audience appeal of the show - it is contemporary, emotional, and for people who like to think.  Of course, those very qualities will make If/Then a tougher sell. 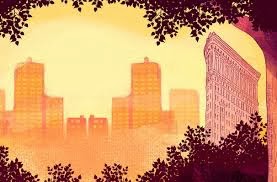 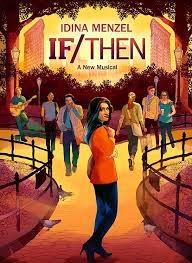 The drawn image at first glance, looks simply like Idina and various characters in a park; she's the center of the show, and those other everyday people will somehow impact her life in ways she doesn't know, the way everyday people impact the lives of everyone.  We also know, from the Flatiron Building in the skyline, that the show takes place in New York.  A closer look, however, should raise some thoughts: why are there two Flatiron Buildings?  Why is the park setting really a split mirror image?  It should be an ah-ha moment, right? Get it?  - two possibilities "If" or "Then."  The problem is that people look at logos for a brief time, unless there is something that really catches the eye.  Is a drawing of Idina Menzel enough to make people look closer? Is the title enough to make you stop and look?  How much do you get at first glance that will make you stop and make you want to buy tickets?

Then there is the new edition of the "photo version," reportedly for the doors of the Richard Rodgers Theatre, to consider.  Keeping in mind that I don't know what, if any wording is on these door images, I think the photos are a good step in the evolution of this selling point.  First, they go with the initial logo - the background is still drawn just like the logo, and the photos put Menzel front and center.  They also clarify the people in the background - a multicultural, multi-sexual group of 21st century New Yorkers.  Fans of certain shows will see right away that Anthony Rapp (Idina's RENT co-star) is in it, and The Color Purple fans will note that LaChanze is in it, too.

The different couplings and positions of the actors also tell you a lot about the various relationships; Idina's different presence in each tells you she has different relationships in each version of her story.  The different colors help to tell you that there are two versions of events going on here.  Of course, to understand that, you need to know that that is, in fact, how the show plays out.  That sure is asking a lot of the general tourist passerby.  Perhaps the wording that will/needs to accompany it will help.  I haven't seen it, so I can't say for sure.

No matter what, a new musical, not based on a known title or premise, is a tough sell these days.  I hope the marketing team knows what it is doing.  Of course, the same could have been said for next to normal. We know how that turned out.  I hope this new show gets just as great word-of-mouth.