REVIEW: The Bridges of Madison County

I suppose I should preface everything I'm about to say about the new Jason Robert Brown musical The Bridges of Madison County with the following disclosures: first, I have never read the book upon which it is based; second, I've never seen the film version; and third, I saw a very early preview of this production.  Although I try not to read the message boards to see what people are saying, I have kept up with it marginally, to find out if any major changes were made.  I understand that the consensus is that the preview period has been used effectively to tighten things up.  All of that said, I have rarely seen a musical so early in previews that has been in such amazing shape.  Regardless of when I saw it, I can say that Bridges is an emotional, slyly thought-provoking musical.

First things first, one must assess the book and score of a new musical, and I found both to be quite good.  Of the creative elements, the show's biggest asset is the romantic and devastating score by Brown.  His songs are wonderfully character-driven, with each having singular motifs and core styles.  The songs for Francesca are beautiful operatic arias, revealing a passion and European sensibility.  The songs for Robert are bold, soaring ballads that are also operatic, revealing an emotional and fully masculine passion.  Brown has also given a very American sound to the characters who are born and bred in the Midwest, with styles ranging from honky tonk to traditional country western to pop - they are all quintessentially American.  And Brown's orchestrations are among the loveliest Broadway has heard in years, full and lush.  Among the score's treasures are the absolutely stunning duets "Falling Into You" and "Before and After You/One Second and a Million Miles," and the clever "When I'm Gone," a duet for the two rural husbands that really advance the plot.  The beauty (and for some, the downfall, I'm going to guess) of this score is that each number so perfectly captures a feeling or event in the moment.  In a show that is really about one slice of life, such a tightly constructed score might come across as almost background music.  I like shows that make me work for the pay off, and this one does just that.  It's not quite Sondheim, but it does remind me of a similar show of his, Passion.

Pulitzer Prize winner Marsha Norman has crafted a mostly tight script that uses words economically, with just about every sentence revealing character, theme and, often, heart-on-your-sleeve emotion.  There are certainly types at work here - the hard-working, slightly gruff farmer, a pair of unhappy teens struggling to get out of the rural prison they think they live in, and a pair of long-loving neighbors - she a nosy gossip; he a weary-of-hearing-it pragmatist.  And, of course, the central couple - she a loving wife and mother who longs for the life she once knew, and maybe what she thinks she's missed; he the mysterious outsider visiting small town America, just another stop on a world tour of photography for National Geographic. He sees the world and wrestles with settling down; she is stuck in the middle of nowhere and wrestles with finding a way out.  But Norman, who has created full characters that aren't really in the book (I'm told), has more than a few surprises up her sleeve.  None of these types are without their twists.  I won't give them all away, but I will give an example: it was a very pleasant "a ha moment" when the nosy neighbor comes through for her friend in a nice way that is surprising, but not out of character, revealing a moment of depth for what comes across at first like just so much comic relief.  Perhaps the only things I might like to have seen changed (and they may have been) are the tightening of the start of act two, a song and dance number at the State Fair, which feels like it was stuck in to make a production number.  (I hope to go another 30+ years before having to watch a Broadway actor carefully shovel fake (or real!) cow manure while singing a song and acting a scene.)  And I hope some work has been done to deepen the character of the angst-filled teenage son with growing pains. 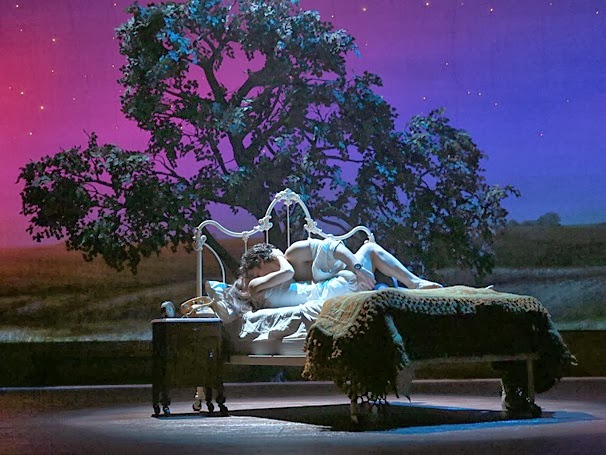 Technically, the show is aces, too, with each element working to create a specific time and place, while keeping with the show's themes and the directorial style of the production.  As usual, Catherine Zuber's costumes are character-specific without intruding on the proceedings.  I imagine it is, in some ways, more difficult to dress a cast in period street clothing than in lavish, over-the-top Broadway productions.  Donald Holder's lighting is equally unintrusive, while still helping to paint the stage with emotional pools of light and evocative shadows.  Jon Weston's suggestive set pieces and use of the full expanse of the stage are perfectly in keeping with the small cocoon of a single Iowa farm house, while also providing for the vastness of the prairie.  All of these elements are superbly rendered in light of the directorial vision of this piece.

Bartlett Sher's direction is both theatrical and grounded in realism, with nods to both Oklahoma!, and even more so Our Town (right down to the umbrellas).  It makes sense that the more theatrically staged sections of the show are all to do with the central romance, while the more realistically staged scenes are given over to the comings and goings of the community that surrounds the romance.  It gives me chills to recall Sher's use of the ensemble as observers of the action as they sit still in chairs placed on the sides of the stage, and as stage hands as they ethereally weave in and out of scenes (many as they are in progress!), moving set pieces and various props.  The show also features one of the most beautifully rendered scenes that combines all of the elements, when Francesca remembers her past in Italy.  It brought to mind the equally engrossing staging of the Count Ludovic/Fosca's past flashback in Passion.  I always love a staging that does things that can only really be done live that never forget the themes of the story.  This gorgeous staging is the antithesis of Sher's manic, fussy staging of Women on the Verge.

Whitney Bashor has the unique assignment of playing important women in the lives of both Francesca and Robert - the sister of the former, the ex-wife of the latter.  Her time as both is brief, and yet she makes a great impression.  Her solo number, "Another Life," has her singing in a bar as Robert's ex-wife in the past, which comments on the action of the present.  The effect - and the song - are thrilling.  I am already looking forward to seeing what this talented young woman does in the future.  As the teen-aged siblings of Francesca, Derek Klena and Caitlin Kinnunen offer a mixture of angst and maturity.  I hope Mr. Klena toned down his performance, which verged on scenery chewing at the top of the show, but was much more subtle as his character aged.  On the other hand, Miss Kinnunen has crafted a surprisingly rich performance as a driven, but pressured young lady; it is surprising only in so much that she doesn't have a ton of dialogue and only parts of a couple songs in which to create her character.

The neighbors are mostly used as comic relief, and as such Michael X. Martin and Cass Morgan are aces.  Both are so skilled that they both know how to make the most of characters we easily recognize while infusing them with so much more than stereotypes.  That ability makes the payoff of both characters' final twists all the more satisfying and completely believable.  Hunter Foster seems to corner the market on gruff war veteran Mid-Westerners these days, and he does pretty well here, creating a challenging enigma of sorts as Francesca's unsuspecting husband.  He easily conveys all the reasons why you can understand his wife's dalliance with another man, and cunningly draws you in enough to realize why things end up in their marriage the way they do.

The mysterious stranger, Robert, that has the town a-buzz, as played by Steven Pasquale anyway, is mysterious less for being a stranger and more for the quiet, brooding facade that covers a lonely and passionate man.  The guy oozes enough sex appeal to validate the spark-filled attraction here, but it is his slow doling out of feelings that is seductive.  When he finally begins to open up, you can see exactly why these two fulfill each other's needs.  It is to Pasquale's credit that that relative subtlety doesn't get lost in the soaring power ballads and operatic duets of the score.  His voice is powerful, not just in the money notes, but in the quiet moments, too.  At one point, he breaks into a lengthy a cappella song intro that gave me goosebumps.  It is even more to his credit that his half of the chemistry between Robert and Francesca is as compelling as hers - no small feat considering the powerhouse he is up against.

Kelli O'Hara will likely have her fifth Tony nomination, if not her first Tony, with this rich and emotionally powerful turn as Francesca.  A wonderful mix of strength and vulnerability, of vitality and world-weariness, Ms. O'Hara delivers the best leading lady performance in recent memory.  Each line, each lyric - each pause, even - is so beautifully rendered you simply cannot take your eyes off of her, and your ears will be in Heaven, so gorgeous is her voice here.  Every time she opens her mouth you are riveted.  Her quiet moments of introspection are satisfying, her frenzied moments of doubt are compelling, and her romantic moments are so satisfying, you can't help but fall in love with her, too.  When Francesca finally gives in to Robert's advances, and you witness their fireworks, it is immediately apparent why O'Hara and Pasquale were cast.  Broadway hasn't seen a powerful couple like this in some time.

Everyone involved has created a slice-of-life show that demands your attention and your own participation in seeing every nuance of a complex community/family/romantic relationship.  The message is simple, but like in life, understanding that takes some effort.  It seems no matter how isolated you feel, the chance for something bigger may just come into your life and change you forever.  Not bad for a Broadway musical.