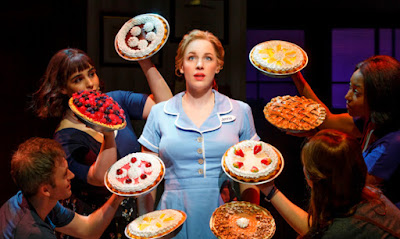 It is testimony to how much I enjoy Sara Bareilles' score for Waitress (well, most of it) that I'm going to try and limit my criticism of the show itself. Suffice it to say, I have several problems with it. Fortunately, most of them don't rear their ugly heads in the cast recording.  Like I said, I really like the score (most of it). And that it features the cast I saw - save for the lead - makes finally getting the CD all the sweeter.

Bareilles, like Cyndi Lauper before her, really knows her way around a show tune, and manages to provide the pop/rock she's famous for, while still developing character, advancing the plot and presenting themes. Okay, so maybe she dips into the pie baking metaphor pool a little too often...
But even though she has subsequently released a Waitress-inspired album, this is, thankfully, not yet another jukebox musical. 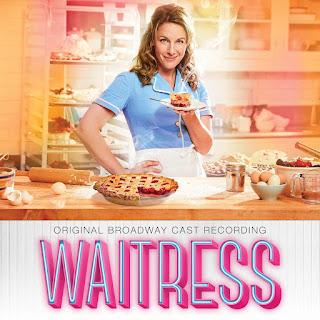 I really love the conceptual/ethereal quality of the start of the show - "What's Inside" and "Opening Up" are on repeat every time I listen to the CD before I move on. And the finale version of "Opening Up" also gives me all the feels. Of course, I love the breakout song, "She Used To Be Mine," which is simply a beautiful song. Jessie Mueller sings it well here - certainly better than the scenery chewing histrionic version she did on the Tony Awards. To be honest, I saw Stephanie Torns, and I think she gave the definitive performance of the number. 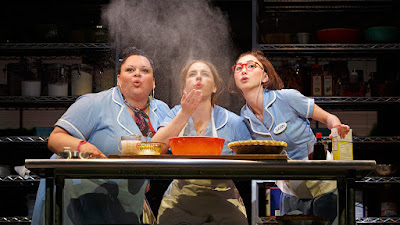 Other songs that stand out in a positive way for me are "The Negative" (very clever & smart), "When He Sees Me" (infectious and I love the dual styles of the verses) and "Everything Changes" (sweetly sentimental). Still, I wish Keala Settle had more to do, because she's a riot and a hell of a singer.

I think more could have been done with the male roles. Though I appreciate the irony of the lyrics for the abusive husband number, "You Will Still Be Mine," has all the sinister quality of a Hallmark Channel movie villain, and I know Nick Cordero could handle a bigger slice of the dramatic pie. On the other end of the Hallmark spectrum is the sweet but vacuous "Take It From an Old Man." Again, Dakin Matthews could handle so much more, and so could the character. 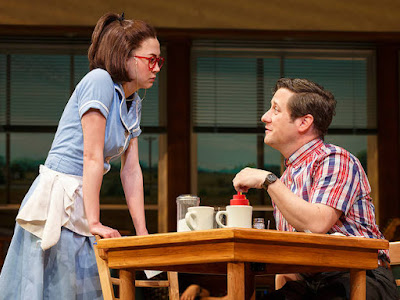 However, the biggest problem I have with the score (and with the show) is "Never Ever Getting Rid Of Me." I don't care how dorky/charming Ogie is supposed to be, in any context, his words and actions are those of a stalker. Dressing up like a founding father and comparing his love for his target to a table does not excuse his behavior. And though I'm sure I'd feel this way no matter who played the role, the fact that it is the vastly overrated and uber creepy Christopher Fitzgerald playing this jerk makes it all the worse.

I fully support the ground-breaking all-female creative team behind the show, particularly Ms. Bareilles and Diane Paulus, in whose work I find joy and inspiration. But I seriously wonder what the reception for this show would have been had a man been at the helm. Would he be called out for glorifying a stalker? For promoting a doctor having sex with a patient (which is illegal where I live)? Showing a woman weak on relationships? No show down with an abusive husband? Would he be called a misogynist? Heck, these days, the fact that a nice old white guy "saves the heroine" would get a lot of timeline space on Twitter. Think about the flak Pretty Woman gets for being out of touch - largely blaming it's male creative team. It covers a lot of the same territory. Is Waitress getting a free pass?

Grade: B+ (for the cast recording by itself)