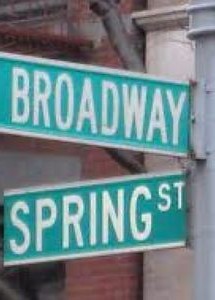 2019 is in full swing, and now we are approaching the crunch of spring openings, with shows trying to get in under the wire for all of the awards. Exciting times for sure! This spring, we are excited about a number of shows of all kinds - on and off Broadway, revivals and brand new entertainments. From classics by Shakespeare, Rodgers and Hammerstein, and Sondheim to new works from new voices, there's a lot to look forward to!

Before we look ahead, let's review what we saw over the cold months of winter. We saw a wide variety of shows, including an opera (Don Giovanni). Theater-wise, we had the pleasure of visiting 3 divas - The Cher Show (B+), the brilliance of a literary masterpiece brought to the stage as a kind of masterpiece - To Kill a Mockingbird (A+), a re-visit to a classic musical, The Phantom of the Opera (A-), a second visit to a phenomenon - Hamilton (B), some off-Broadway hi-jinx with Puffs (B-), epic, thrilling fun - Harry Potter and the Cursed Child Parts 1 and 2 (A+), and a trip to a regional theater to see a modern musical masterpiece - Center Stage's Fun Home (A+). Aside from missing Torch Song (by a week!), the past three months have been very satisfying.

Here's to another season of great times at the theater! We are looking forward to:

King Lear (on Broadway at the Cort Theatre)

After watching her tear up the stage last season in Three Tall Women, we had to see Glenda Jackson's acclaimed turn in the title role of one of our favorite Shakespeare tragedies. And we love Jane Houdyshell. A score by Philip Glass and direction by Sam Gold just sweetens the pot.

Be More Chill (on Broadway at the Lyceum Theatre)

It's new. It's phenomenon adjacent. Of course we have to see it! (Plus I need the validation of not being the only one who has panic attacks on a tub...)

Merrily We Roll Along (off-Broadway at the Laura Pels Theatre)

Despite (or maybe because of) the mixed reviews and the bickering in chat rooms over this latest attempt to find the perfect Merrily, I'm excited to see it. I loved Fiasco Theater's Into the Woods, and look forward to seeing what they've come up with. 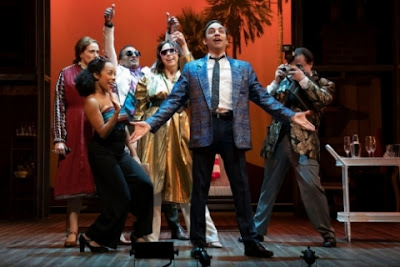 One of my all-time favorite shows, I can't wait to introduce Mike to this great show. Signature does solid work, and it'll be interesting to see it without Tommy Tune's spin on it. The always wonderful Natascia Diaz is featured.

Beetlejuice (on Broadway at the Winter Garden Theatre)

You know, I've never seen the movie straight through. But I'm still looking forward this musicalization. The set pictures look amazing, and I'm a fan of the cast - Alex Brightman, Rob McClure and Kerry Butler are favorites. Rumor has it that Sophia Anne Caruso's performance is not to be missed. 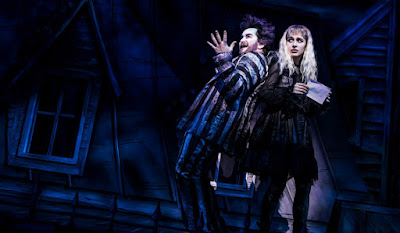 Oklahoma! (on Broadway at the Circle in the Square)

I've only seen Oklahoma! once before. It was the national tour of the last revival. Not sure what the fuss was about that one - watching Aunt Eller churn butter during the interminable overture was a perfect metaphor for that snoozer. So you may be asking "why is Jeff looking forward to it now?" Well, "Sexy" Oklahoma! intrigues me. I'm looking forward to a sharp, modern take on this old war horse. And Rebecca Naomi Jones is in it? Sign. Me. Up! 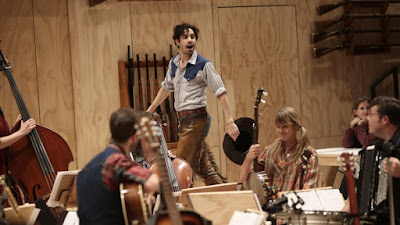 Tootsie (on Broadway at the Marquis Theatre) 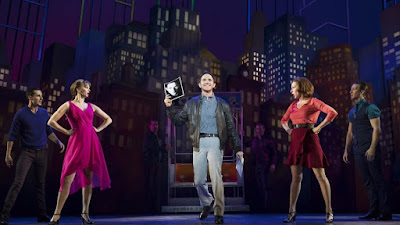 Hadestown (on Broadway at the Walter Kerr Theatre)

It's weird, thought-provoking, and staged by The Great Comet's Rachel Chavkin. Right up my alley. Add a new (to theatre) voice in composer/lyricist Anais Mitchell, Reeve Carney, Patrick Page, Andre De Shields, Amber Gray, Eva Noblezada and Patrick Page, and I just gotta see it. I'm trying to keep my expectations at bay! 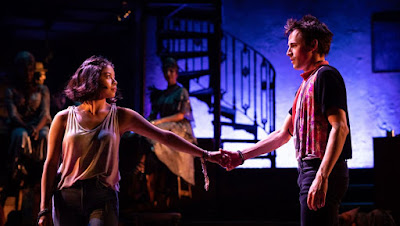 It's going to be an exciting three months!

1. How many currently running Broadway productions won the Best Musical Tony Award? 7. The Phantom of the Opera, The Lion King, The Book of Mormon, Kinky Boots, Hamilton, Dear Evan Hansen, and The Band's Visit.

2. How many currently running Broadway shows have played in more than one theater? 2. Chicago (The Richard Rodgers, The Sam S. Shubert and The Ambassador) and The Lion King (The New Amsterdam and The Minskoff).

3. How many currently running Broadway shows are directed by Casey Nicholaw? 4. The Book of Mormon, Aladdin, Mean Girls and The Prom.

4. How many currently running Broadway shows that did not win the Best Musical Tony the season they opened have run longer than the show that did? 3. Wicked has run longer than Avenue Q (2004). Both Aladdin and Beautiful: The Carole King Musical have run longer than A Gentleman's Guide to Love and Murder (2014). With it's April 7 closing, it looks like The Band's Visit will be outrun by both Frozen and Mean Girls (2018).

5. How many Broadway theaters have escalators to the seating area? 4. The Minskoff, The Gershwin, The Marquis, and The Circle in the Square.