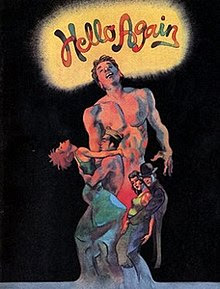 The 1993 and 1994 were two of my favorite years, on- and off-Broadway. Easily the best of the off-Broadway things I saw then was Hello Again the now well-known musical version of La Ronde, with a cast that today reads like a who's who of theater stars, including future Tony nominees and winners. In fact, it reminds me a lot of the recently announced cast of the upcoming Company revival. The score remains one of my favorites of all scores, and is one of my two favorite LaChiusa scores (the other being The Wild Party).

When I finally got to see Hello Again, it was in its final weeks of performances, so I missed Donna Murphy, who I would see soon enough in her career-defining turn in Passion. Her replacement was wonderful and the entire cast was mesmerizing. To be honest, I'm not entirely sure I took a breath until the curtain call. Two things I'll never forget: the line "My name is Leocadia," and the moment Carolee Carmello got up off the floor after giving Michael Park a blow job, muttering something about having popcorn stuck on her knees. The look of embarrassed shock on her face felt so genuine and real. I've been a fan ever since. 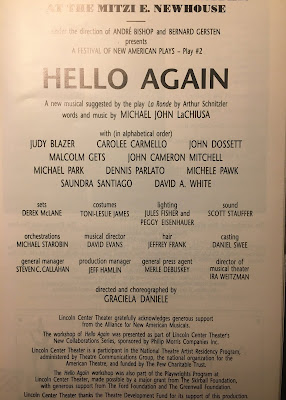 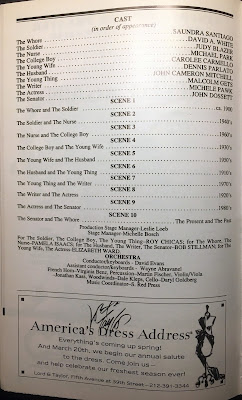 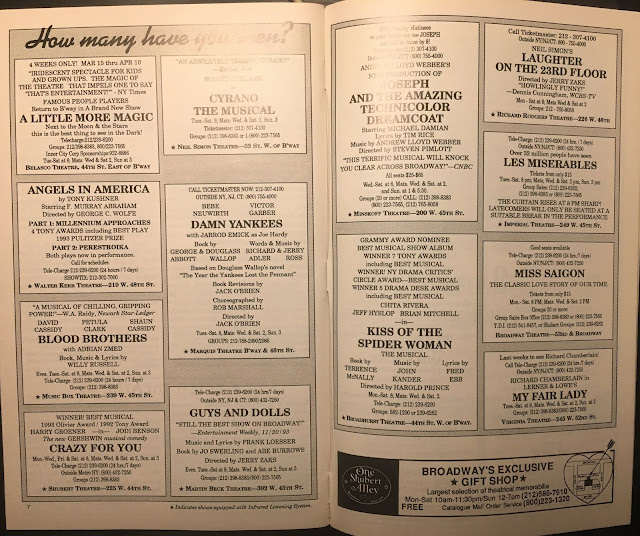 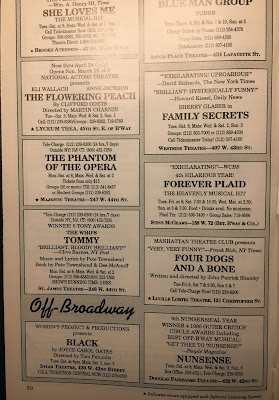 I always love to look back at the show listings! 25 years ago, the shows I loved included Angles in America, Blood Brothers, Crazy For You, Damn Yankees, Kiss of the Spider Woman, She Loves Me and The Who's Tommy (I can't wait for the revival!). The amazing thing is that I completely missed the acclaimed revival of Guys and Dolls, but I did see Cyrano: The Musical! Before you ask, I appreciated but did not love Joseph..., Miss Saigon, Les Miserables and The Phantom of the Opera. Of the four, I liked Joseph...the least - I adored the original production, and Miss Saigon the most - I find it vastly superior to Les Miz. In the intervening years, I have come to regard Phantom very highly, recognizing its rightful place in Broadway/musical theater history.