LOGOS: The Book of Mormon

In recent days, the creators of The Book of Mormon have been very careful to be sure to admit that their show will probably offend people, but that they all love the art form of the musical and Broadway itself, that they sincerely hope that any offense taken won't be enough to keep them from being asked back.  Well, if as much care has been given to the show as has been given to the permutations of the show logo, I have but two things to say:

The bottom line is this:  if the logo of a show can be this sharp and witty, the show has to be at least as good, if not better.  I, for one, am glad I have my tickets secured already. 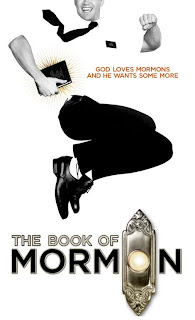 There have been several variations on a theme with the show logo/advertising for The Book of Mormon.  So, let's first look at the common threads of all of it.  First, you must notice the sheer austerity of the artwork.  With so little eye clutter, it is easier to focus on the title and the messages of the text.  I love that the primary colors are white and black, just like the "uniform" of the Mormons who come to your door so politely, white shirt, black tie, pants and shoes - not to mention their name tags also black with white lettering.  I also love the plain, but strong lettering style, suggesting that "the Word" is what is important not the delivery of it.  And that the only other color is an earthy brown/orange/gold mixture really sets them apart, but not so bombastically as say, pink or bright yellow.  Bold, simple, powerful.  Are we talking text style or Mormon elders?  See how clever this is already?  (And I am most definitely NOT being sarcastic.)

Then there is the jubilant, jumping for joy Mormon elder.  One might say he is joyous and jumping or perhaps in mid-dance move.  Either way it screams Broadway panache and musicality.  It also shouts "THIS IS GOING TO BE FUN!"  And yet, it pays its respects to the young men (and women) who are devout to their religion - his clothes are perfectly together and he is clutching very firmly his Book of Mormon.  The combination of the two aspects in one image is brilliant, especially when you remember that study that says most show logos earn a very few seconds of a glance to make an impression.  If you can't get out of this image that Mormons are fun and happy religious people, I can't help you any more. 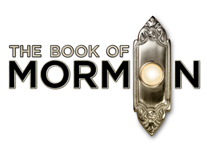 The final element that has made it through all of the permutations of logo and advertising is is absolutely dead on and HILARIOUS use of a doorbell is an "O" in "Mormon."  The first time I scrolled over that doorbell and it "ding"ed, I literally howled with laughter, and "rang" it like 15 more times in a row.  What an absolutely brilliant way to bring the world of Mormons and the world of non-Mormons together!  Most of us only know of Mormons from what we see when we answer the door.  I sincerely hope that the next time a pair of these lads comes to my door that I won't just burst out laughing.  And logo-wise I have to appreciate the universality of the image, the hilarity of the image and the relative subtlety of it.  Again, this isn't entirely low-brow, visual trickery like say, Spamalot, this is also smart, thought-provoking humor. 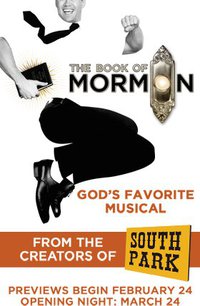 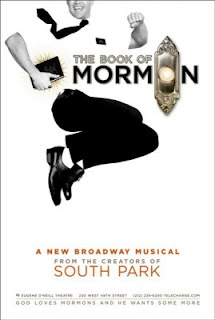 If it were me, I'd keep all of the image to the right, and switch the
tag lines, so that "God's Favorite Musical" was on image to the right.
And I'd ditch the holy light beams.  But it's not me, and I really like them all, anyway!
What I really love about the ads and logo is the way they've experimented with a catchphrase and the placement of it.  Personally, I like "God's Favorite Musical" the best.  It is short, to the point, in keeping with similar Broadway catchphrases, and it is funny without being offensive - especially when coupled with "From the Creators of South Park."  That should be a major clue as to tone and intent.  I don't, however, like the version that uses the "South Park" logo.  It is eye-clutter, panders to an audience that will already be there and could potentially be off-putting to people who have never seen the show, i.e. if you don't know "South Park," you won't get this show.

I understand and appreciate their other attempt at a tag line, which they seem to have dropped recently: "God loves Mormons and wants some more."  Perhaps that is just a bit too aggressive?  Maybe even too serious?  Maybe too close to being disrespectful of Mormon beliefs?  I think it could be a little of all of those, plus it is wordy.  If you spend too many precious seconds reading the tag line and trying to digest it, you stand a chance of losing that initial impulse and potential ticket sale.  No, I think "God's Favorite Musical" is just right.

There are two subtle things that have come and gone and come again in this artwork: jubilant beams of light emanating from The Book of Mormon in the elder's hand - it is gone, I think.  Definitely too religious.  The other is whether or not you see the whole face of the boy in the picture.  Most of the images cut him off at the top of the nose, so you can't see his eyes or hair.  I think I prefer this version.  Why?  Because it allows the image to be an any man type of thing, versus being a specific person.  Then you can avoid that whole "is he actually in the show?" thing, like at Mamma Mia!

While I seriously doubt Trey Parker, Matt Stone or Robert Lopez will ever even see this, let alone comment on how right or wrong my interpretation is, I hope that those who do read it - whether you agree with me or not - can see in it the same potential for a smart, irreverent, but very humane show.  I would hate for yet another show to be destroyed by knee-jerk or ill-informed opinions.  These guys are taking a big risk in trying to bring something new to the stage, while still paying tribute to the art form.  And I welcome it with open arms!