RANT/RAVE: The It Gets Better Campaign and Priscilla's PSA

RAVE:
Let me first sing the praises of the organizers of one of my favorite charity/public service organizations, the It Gets Better Project.  They have started the proverbial snowball rolling down hill.  Since its inception they have gathered thousands of videos from people from all walks of life who, each in their own way, convey that they understand what LGBT teens are going through and to urge them to stay strong and persevere because in a short time, as they blossom into adulthood, things will, in fact, get better.

Some tell of personal triumphs over bullying, others of trying to gain support from family. Still others relate stories of friends and loved ones that they saw bullied, hurt, and sometimes, sadly, suicidal.  These people are everyday Joes and Janes just like you and me, they are politicians, movie and TV stars, musicians, athletes and, of course Broadway folks.  But the beauty of the project is that whether or not it an Oscar winner, an Olympic Gold Medalist or a college kid from Iowa, each story has meaning and ultimately offers hope.

The project's website http://www.itgetsbetterproject.com/ is simple to navigate and full of inspiration, information and hope.  There is so much there it bears being bookmarked on your computer for ease of returning over and over. One area on the site is the "Take the Pledge" section, which asks you quite simply to cyber-sign a pledge that you will not simply stand by while hate and brutality towards anyone takes place - that you will stand up and defend the defenseless.  It is a simple statement, but a powerful one (and I dare say that their wording is much better than what I just provided).

The other area that bears your consideration is the "Make a Pledge" section.  Normally, I would not use this platform to solicit your money, but I can tell you that had this been around when I needed it, my life would be much much different than it is today.  It needs our support.  You can simply donate to the project in general or you can help out by 1) pre-ordering the book form of the "It Gets Better" Project, due out March 22nd, including sections authored by Kyle Dean Massey and other Broadway celebrities.  Proceeds from the book (also available in e-book format) will benefit the Project as well as organizations like The Trevor Project and GLSEN; or 2) make a donation to the fund that will put a copy of the book in every high school in the USA, along with information to support struggling teens.  I can't think of a better place to have these books readily available, especially in rural America where it seems so much more of this goes on unchecked.

I signed the pledge and made a donation to the book fund myself, and I urge each of you to do the same.  And I found two videos to be especially well-presented and poignant:  Judith Light (Lombardi), who talks about all of her gay friends growing up and how they influenced her as an actress, and how during some very dark times, they rose above and became personal heroes.  And there is the message from Max Adler, who plays a gay-bashing football player/closeted gay youth on Glee.  You will, I think, be moved to action by both of these powerful statements.


RANT:
I have long championed the "It Gets Better" Project, having featured it several times on this very blog. But I have a real problem with their latest segment.

Monday, The New York Times reported that the project's first PSA would begin airing Tuesday on NYC's CBS channels. The PSA features Will Swenson, Nick Adams and Tony Sheldon from Priscilla: Queen of the Desert. I hate to look a gift-horse in the mouth, but I have to express a couple of misgivings I have about this announcement and ad.

First, the Times refers to the whole project as, "an online video campaign to cheer up gay teenagers who have been victims of bullies." Cheer them up? Excuse me? I think there is much more to this project than a mere cheering up of teens so terrified that they feel suicide is their only recourse.

And second, the ad itself, the brainchild of the show's marketing department, has the stars wearing "I 'Heart' Priscilla Queen of the Desert" sparkly t-shirts, and features a snazzy logo from the show and a voice-over at the end directing us to more information on the SHOW site. (The It Gets Better Project logo does appear sandwiched between the show logo and the show website URL, but is never verbally mentioned.)  Having watched dozens of the previous clips, I can tell you that none of them feature blatant merchandising of the show the speakers are appearing in. Every one of them features only directions to the Trevor Project or It Gets Better sites, which in turn offer direct links to help. Nowhere is there enticement to see a specific show, beyond an occasional mention of who the people are in the video (i.e. "We are the cast of the National Tour of A Chorus Line"). And while I have absolutely no doubt that Mr. Swenson, Adams and Sheldon are sincere in their support of the project, one can't help but take the producers of the show to task for making it even a little bit about their show, and not 100% about gay teens in trouble. 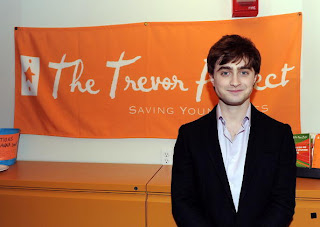 Broadway and film star Daniel Radcliffe offers his
"clout" in support of The Trevor Project.  Notice
that there is not a single bit of the image that concerns
Harry Potter, Equus or How to Succeed...
Part of what makes these testimonials so powerful is that the people in them aren't being Broadway stars or TV celebrities, they are being regular every day people that are saying, most from experience, that it does get better, that there is hope. To be fair, The New York Times article gives more space to the history of the project and the power of its message even before this PSA hits the airwaves.

In the interest of complete fairness, the Priscilla company did do an "It Gets Better" video more in line with all of the others.  In fact, it is one of the best.


But shame on project founder Dan Savage for stating that Priscilla is "thematically a perfect fit." Why? Because it has two drag queens and a transvestite as central characters? How ridiculous to think that gay teens are more likely to see themselves and identify with their problems simply because of that. You'd think he'd know better. Of course, how can he condemn such publicity and the potential expanded audience for his overall message? I guess it is a fine line. 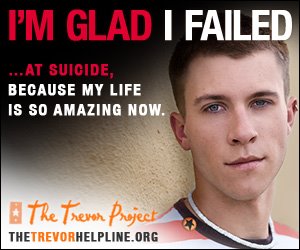 As a formerly bullied gay teen myself, I'd rather have seen people just like me telling me that they had been were I was, and that I should hold out because life will improve. Had my first brush with suicide prevention resulted in going a website full of oddly wigged, colorfully costumed men dressed like women while "It's Raining Men" plays in the background, I'd have run screaming from my computer and right into a noose. Are we entirely sure that teens on the brink need to see such extreme examples of their sexual orientation, when all they want to know is that they aren't all that different?  OK, I admit it.  That was me - some might feel exactly the same way, others may react completely differently.

A "perfect fit"... um, sure. Tell that to the poor kid in the middle of nowhere who hears he's going to Hell because he's a "sissy" and then show him Tony Sheldon in a dress and Nick Adams in full drag. No wonder he feels helpless. Doesn't that verify what his ignorant classmates (and even parents) might say - "Being a fag means you dress like a girl and sing show tunes." When you see this, how do you live up to it? How can you argue that the bullies are even wrong?  How do you realize that being gay doesn't make you a drag queen unless you want to be one? And is THAT the image he needs to see before he decides whether or not he will end his life?

On the other hand, there are plenty of at-risk teens who not only struggle with their sexual identity, but with how they most desire to express it.  To that end, maybe the Priscilla PSA may help those kids, and they need to see the show website - after all, Tony Sheldon in a dress is happy and well-adjusted and Nick Adams in full drag is clearly comfortable, happy, and enjoying life.  For all those kids out there who need to see that, I am truly glad this is there for them.  There are a number of others to watch/listen to for kids who don't.  I guess it is both a fine line and a blurry one between pandering to stereotypes and serving people who can honestly identify with them.

So, really, "perfect fit" is an unfortunate choice of words.  Perhaps what he should have said (and even really meant) was that the inclusion of happy, well-adjusted drag queens and transvestites, as colorfully depicted on the Priscilla website, is in keeping with the inclusiveness of the wide-spectrum of LGBT people in the overall project.

Man, the issue is a complicated one, isn't it?  No matter what, though, my main peeve - the commercialization of such an important issue - remains.

I sincerely hope the marketing people at Priscilla really had their hearts in the right place when they came up with this heinous bit of product placement. But let's be honest. If they REALLY meant it, the piece would end with a link to the general campaign or to The Trevor Project only, not a sub page of their show's website with links to Ticketmaster and Priscilla merchandise.

If you need help or are considering drastic measures to deal with feelings about who you are, or know someone who needs help, go to www.thetrevorhelpline.org.

Comments?  Leave one here or email me at jkstheatrescene@yahoo.com or Tweet me.
Jeff
2.176
Posted by JK at 12:01 PM

Labels: It Gets Better, Priscilla Queen of the Desert