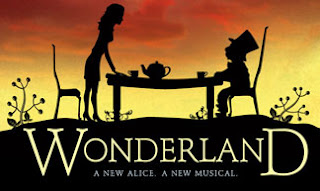 Wonderland is the one show this spring that I hear little buzz about, and I'm not entirely sure why.  It has a composer that has a very intense legion of fans, Frank Wildhorn.  OK, so he's really only had 2 minor-ish hits with decent runs - Jekyll and Hyde and The Scarlet Pimpernel.  It has a really cool logo for use in all of its advertising - maybe the best of the season (more in a separate blog about that).  OK, but for all of its recognizability, there is just something inherently creepy about the whole Alice Through the Looking Glass thing.  Then there is the pretty slick website - easy to navigate, full of critical quotes and show info.  OK, but it also has tracks from its score, which are Wildhorn standards: belty anthems or clever on first hearing, banal on second hearings pop tunes.  From the samples alone, I can imagine that the fans of American Idol and its over-blown histrionic style will "whoo!" and scream after every over amplified tune in the show.  (For me, it is always the tunes that get the least "whoo"ing at a Wildhorn show that I like the best!)

OK, so far, there are only two things have even moderately upped my interest in Wonderland: A New Alice. A New Musical Adventure (and I HATE the sub-titles).  First are the pictures they've released.  OK, the pictures do show some very colorful scenery, costumes and cast poses - Kate Shindle's Mad Hatter intrigues me in the same way those Times Square costumed people do, and Darren Richie is simply a good looking man, though Janet Dacal's simple magenta frock is not what I'd have gone with as the ONE costume she appears to wear in the whole show. 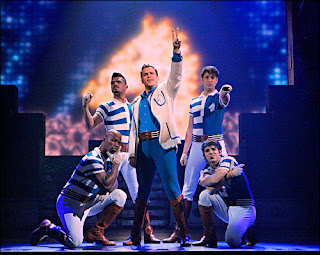 The other somewhat interesting thing about the show is the cast.  Full of up and coming folks, and one or two seasoned vets, though, this cast suffers in the Broadway high wattage casting sweepstakes this year.  Last year, this would have rivaled The Addams Family in star-power.  This year? Karen Mason who?

Still, here's a look at who's who in Wonderland: 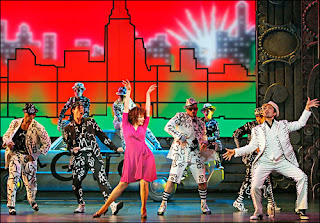 A decent, accomplished cast, to be sure.  And I understand this could make Ms. Dacal and Mr. Richie big Broadway stars.  I really do wish them all the best.  Really.

But the Marquis Theatre has a bit of a curse, you know.  Only three hit shows in its history: Me and My Girl, Annie Get Your Gun and Thoroughly Modern Millie.  Will Wonderland break that curse?  We shall see.  Of all the shows opening this season, this is the one I am least stoked about.  I'm not a fan of the Wonderland thing in any version, really.  And so the cheapest seat I could buy will have to do for now.  And who knows?  If it's any good, I can always go back down the hole again.  I hear tickets are pretty easy to get.

Comments?  Leave one here, email me at jkstheatrescene@yahoo.com, or Tweet me!
Jeff
2.170

WIN TICKETS TO HOW TO SUCCEED ON BROADWAY!  CLICK HERE TO FIND OUT HOW! 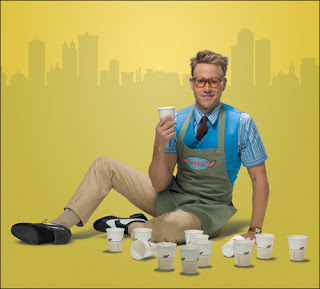 TRIVIA QUESTION #2:
Which musical was written by Rodgers and Hammerstein and won the Pulitzer Prize?


Look for question #3 at the bottom of tomorrow's blog! And remember, you need to give the letter AND the answer on your entry!

(Christopher J. Hanke as Bud Frump in How to Succeed... Photo by Chris Callis)
Posted by JK at 12:01 PM