With the major shift in the cast due to begin tomorrow, I thought I'd take a look today at what was preserved of the original cast of the 201 Tony Award-winning Best Revival of a Musical.  I know I am in the minority about this revival of La Cage aux Folles.  The "de-glamorizing" of it doesn't really work for me, and neither does half of the Tony-winning performance of Douglas Hodge.  No one should have to work that hard to put across the I'm marching to my own beat/I march to my own beat to hide my insecurities thing.  While the show - sentimental and as trite as it is today - remains among my favorites of all time, this production leaves me lukewarm at best, turned off at least.  And unfortunately, this cast recording has done nothing to change my feelings about it. 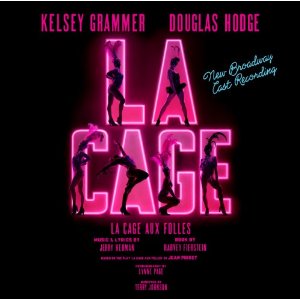 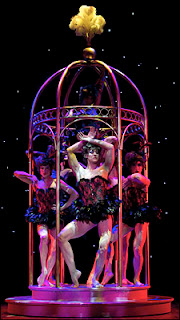 What I said about the show and its stars: "So what about the play? The play and music both hold up exceptionally well, particularly Herman's saccharine-sweet, but lovable score. But, with a lot of the shock value gone now, Fierstein's book, while hilarious (we still love to laugh at the gays) as ever, is a bit quaint, and even a bit cliche. OK, not cliche, because the original (and the play and movie it was based on) started the whole thing. But subsequent productions, the film The Birdcage, and even The Addams Family now, have made this plot pretty obvious. But you expect that to an extent at a revival, anyway. And no one really tinkered with the proven, which is good.  How does it work "scaled-down" and "edgy"? It does and it doesn't. I really didn't see "edgy" on my visit. I saw plenty of overacting and needless and intrusive characterization where there should have been none. But the "scaled-down" worked 80% very well. And all of that can easily be laid to blame and praise in the hands of director Terry Johnson. The stage never felt crowded or claustrophobic, and it was a very good choice - economically and thematically - to have the same actors portray common citizens of St. Tropez and the ultra-conservative politician and wife determined to get rid of anything that doesn't reek of moral fortitude and family values.  [Still] there is no way this La Cage would be "the jewel of the Riviera." Cubic zirconia, maybe... the script does not bear out the dingy, run-down quality of the setting."

"The other chief problem I have with this production is co-star Douglas Hodge as Albin/Zsa Zsa.  I don't care how many awards he has already won, or the ones he could very well get in the future.  His performance in Act One is so over the top - he mugs and prances in a way that Broadway might not have seen since the Benny Hill years.  [But then] the Douglas Hodge of Act One is gone, and the award-winning Douglas Hodge is in his place.  He has brought the whole Zsa Zsa -as-defense-mechanism thing down about 50 notches, lets his own quirky accent and inflection take over, and he shows amazing depth as an actor.  The minute he makes his first entrance in act two, you see a man in pain, devastated by his own child, and still fiercely protective of his whole family.  In short, he is family values personified." 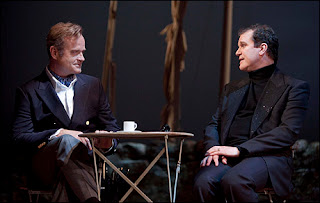 "OK, so what about the other star of the show, Kelsey Grammer?  Let me just list the adjectives: revelatory, distinctive, charming, charismatic, brilliant.  He is funny, sharp, and an incredibly good crooner (he's no Sinatra, but his voice is magnificent).  But most importantly, throughout BOTH acts of the show, he is giving a grounded in reality, down to earth performance that is notable for many things, but most appreciably for its understated grace.  His Georges is completely believable as night club owner, lover to an eccentric and bitter queen, a loving, doting father, and as a pillar of the community.  Were the role flashier, I'd call him a shoo-in for a Tony nod (and I am still hoping he gets one, though history says it will go to Hodge, like the other Zsa Zsas before him).  When he sings "Song on the Sand," you fall in love with him, and when he sings "Look Over There," you are reduced to tears, all schmaltz acted right through.  I am so glad I got to see him in this role." 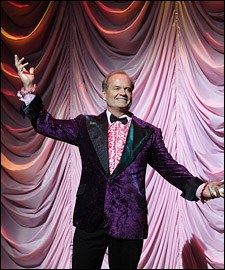 On the Recording and the Stand Out Songs:  As I said at the top, this recording does not change my mind about the production is preserves.  In fact, I think I would like the production even less had I heard the recording first, or maybe I'd have skipped the revival altogether.  That said, I am still glad I saw it for all of the reasons - well, the reason - I praised it: Kelsey Grammer - who is as good, if not better on the recording.

And there are other things to praise about this recording:

But what was wrong onstage is still as wrong, if not more so on the recording: Douglas Hodge in any of the first 12 tracks.  The difference is that the vocals alone make his nutty, over-the-top performance seem even more schizo that it is.  Talk about over acting!  And it ruins probably my favorite song in the whole show, "A Little More Mascara."

And so the songs that really stand out for me are "Song on the Sand," "La Cage aux Folles" (especially all the terrific lyrics additions and the fact that you can understand every word clear as a bell) and "Look Over There," which makes me tear up just listening to it.

Ultimately, I'll keep playing the Original Cast Recording, and burn a few selected tracks of this one onto my computer.  That way I can get a Kelsey fix whenever I need it.