LOGOS: The House of Blue Leaves and Arcadia

Soon Broadway will be host to two star-filled revivals: The House of Blue Leaves and Arcadia.  And as the date approaches for first previews and Opening Nights, the PR is gaining momentum.  I thought I'd take a look at their logos and see if they impress me enough to want to buy a ticket.

First up: The House of Blue Leaves by John Guare.  Starring Edie Falco, Ben Stiller and Jennifer Jason Leigh.  The Queens set play features a host of oddball characters, including a zookeeper who longs for a career in songwriting and a schizophrenic named Bananas, whose next stop is the House of Blue Leaves.  The action unfolds (including a bomb) on the day the Pope is to visit New York City.


Hmmm...where do I start?  The large, fill-the-screen version that came up when I opened this, actually made me turn away because it literally hurt my eyes, kinda like when it is dark in the house and you open the refrigerator for a midnight sip of milk.  After adjusting to it - and it still does funny things when you look at it for more than a few seconds at a time - I did start to notice a few things that suggest that the play might be interesting.

First, there is the lone window on the huge wall, closed and curtains shut.  This suggests a lonely household or one that even in a huge building is still lonely.  And because it isn't a bright, garish color it draws attention.  Second there is that tiny (relatively) Papal hat, almost out of the picture.  Even if I didn't know the basic plot, I'd have to notice that the hat, along with the shut window, means that important things are going on outside in the world, but the people behind the window are missing it.  A huge theme; is it in the play?  I'm not sure, but this art certainly suggests it.
Still, those two little things only came to me after a few minutes of closer looks and some thought.  I've read that people spend less than 30 seconds looking at a logo for a show, and only spend more time on it if they are initially interested.  I have a feeling that whoever came up with this was thinking" the bright red/orange will get them to stop, and the bold names of the stars will get them to look longer.  And if that doesn't get them, the title will."  I couldn't disagree more.  The red/orange is off-putting at best, and that shade of blue makes it look like the words are moving.  I am annoyed, not interested in the first 10 seconds, and will likely keep walking.  Also, I hate to say it, and no offense to the stars, but as big as they are (and I consider all three to be big names) how many people know them by last name, especially Ms. Leigh, whose last name is a first name, or a last name made famous by a dead movie star?  I would need at least the whole "Edie Falco" were I the average theatre goer happening upon this ad in the subway, and probably a picture, at which point I'd more than likely say, "Oh! Mrs. Soprano is in a play!".  And given that this is the third major NY production of the play, IF I got to figuring out the title, and IF I was interested enough to re-read it again, "Stiller" might make me think Jerry, not Ben, even though Ben was in the last revival, too.  Why?  Because Anne Meara - who goes hand in hand with Jerry Stiller - was part of the original, ground-breaking production.
Finally, I think that making the title exactly the same style size and color of the rest of the print minimizes the play itself, and its author and director who are in considerably smaller print.  The message I get is that the stars are more important than the play, its writer or its currently very hot director.  And that, as much as the ugly color turns me off.
Grade: D-
Next up: Arcadia by Tom Stoppard.  In import of a recent London revival, the American cast includes Billy Crudup and Margaret Colin.   The comic-drama takes place at an English country manor, in the 19th and 20th centuries simultaneously.  An exploration of the relationship between yesterday and today, modern thinking, history, proof and disproof, the play is elegantly complex.  As riveting as it is demanding of the audience, the experience is a heady one. 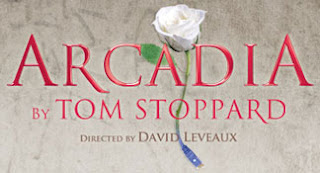 The logo for this play perfectly matches the dichotomy of the play's time periods, the elegance of a time long ago and the stark clean lines of all things modern.  My eye is first drawn to the image, not only because it is the largest thing on the logo, but because it is intertwined in the words.
That image speaks volumes about the play even at one glance. A white rose, not a red one, suggests purity and maybe romance, but not love, and a rose one of nature's perfect creations, visually pleasing and mathematically calculable.  The stem is complete, too, with a leaf and a small thorn, suggesting that even with the beauty comes some danger.  It is the stem, winding its way through the lettering that continues to hole your eye.  And suddenly it morphs into a computer plug, bright blue and not anything in common with the rest of the logo's classic beauty.  I find myself immediately intrigued, and knowing the plot/set up of the play find the image completely clever and apt.  But even if I didn't know the set up, I'd still be intrigued by the image.
Set against a marbleized background, one can recognize, too, that the setting will be classic, elegant, and probably one of wealth.  The bright red lettering of the title ad the playwright's name also draw your eye.  The capital A's on both ends suggest a symmetry, and the style of the lettering itself practically screams "classic."  Tom Stoppard's name is certainly still a draw to serious theatre goers, and I think it interesting, that in this version, at least, the director's name is present, but smaller, and blends in with the background.  David Leveaux has had a hot/cold Broadway track record at best - even with 5 Tony nominations, those that marvelled at his take on Nine were equally taken aback by his tinkering with the classic Fiddler on the Roof, for example.  So perhaps it is best that he gets recognized, but the powers that be want to emphasize the strength and draw of the title and the writer.  (To be fair, there are other versions of the logo with the director's name in red, too, and the same size.)

I think either version of this logo does its 30 second job very well, and probably earns itself another 15  or 20 seconds.  The iconography is compelling and in one image summarizes the play.  The background and the lettering convey tone and the fact that in this production, the play is the thing.
Grade: A+