CASTING: Priscilla: Queen of the Desert

I have never seen the film Priscilla: Queen of the Desert, despite the fact that every single one of my friends have told me to see it - even my parents have seen and loved it!  And what's not for me to love - great music, heart-warming, funny story, and a nice dose of its OK to be gay.  Still, I somehow missed it.  And somehow I have the film soundtrack.  Then I heard that it was coming to London as a full stage musical, with aspirations for Broadway.  I decided right then and there that I was going wait to see the movie until after I saw the show.  I wanted to go in cold!

So for years now, I've been following the show's trek from West End sensation to Toronto sell out sensation to the naming of the Broadway Company.  And I am thrilled and excited!  And I'm really excited that these drag queens, based on the photos I've seen, LOOK like drag queens.  In fact the pictures - of the cast, the costumes and the sets have me super ready to see this show!

The casting looks great: 1 London star ready to take Manhattan, and two Broadway favorites, one newly established, the other a true Broadway star on the rise.  Add to that a colorful variety of stage experience ranging from the play Enron to Memphis on the part of the supporting and ensemble cast, as well as a nice chunk of excited and exciting Broadway debutantes, and I don't see how this cast can lose! 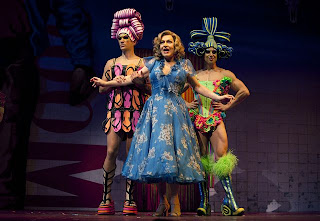 Swenson, Sheldon and Adams
Olivier Award nominee Tony Sheldon (as Bernadette) - making his Broadway debut, 110 in the Shade/Hair (Tony Award nominee)'s Will Swenson (as Tick/Mitzi) and Chicago/Guys and Dolls/A Chorus Line/La Cage aux Folles babe Nick Adams (as Adam/Felicia) head the cast of this movie-turned-disco extravaganza musical. Based on the film by the same name, Priscilla tells the story of three friends who get on an old bus and travel the countryside in search of love and friendship, and end up “finding more than they could ever have dreamed.” 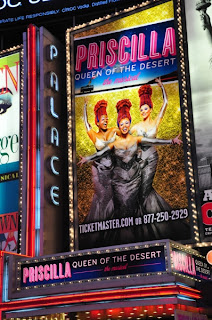 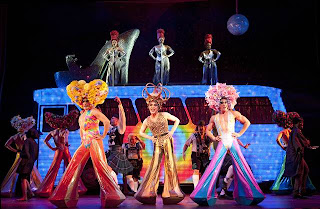 Like I said, I am so excited!  I'll let you know what I think when my review posts after the show opens in March!  What do you think?  Will it be a hit or a miss?  Are you looking forward to it?