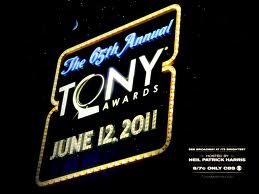 Well, at this point, I've done just about everything I can to be as informed as I can about who I think SHOULD win a Tony and WILL win a Tony at tomorrow's ceremony.  Over the season, I was fortunate enough to see all of the nominees in the musical categories. Since I saw only a handful of the eligible plays this season, I will offer only my picks for the musical categories.  I've also included my buddy Mike's picks, as he attended these shows with me, and has been a terrific contributor/editor throughout the season.

Here are our picks (who SHOULD win and who WILL win) in the musical categories.

Best Direction of a Musical
Jeff:
Should Win: Susan Stroman, The Scottsboro Boys
Will Win: Casey Nicholaw and Trey Parker, The Book of Mormon

Mike:
Should Win: Susan Stroman, The Scottsboro Boys
Will Win: Casey Nicholaw and Trey Parker, The Book of Mormon

We both agreed, now and when we saw each show.  Stroman's creativity and conceptual direction was spot on, while Nicholaw and Parker's work is a tribute to traditional  musical comedy direction and a modern, self-reverential edge all rolled into one.  Truth is, either would be a terrific choice.

We both think Tony voters will remember the terrific title tap number and forget that this show is surprisingly danceless.  I think the dancing Ashford provides in H2S is thematic, witty, complicated and just a ton of fun to watch.  I can see Mike's choice, too, with Stroman's period dances blending into the staging, creating a stunning flow of visual excitement.

This is one of those categories that I don't think Tony voters really understand, and it usually goes to the best score winner, hence my "will win."  But in a fantasy world where real quality is chosen, I will go with CMIYC, whose orchestra makes the period lushness of the score's style come through, song after song.  And I have to bow to Mike's expertise in all things musical.  If either of our choices win, I'm OK with it!

I am so glad that the powers that be remembered Bloody Bloody Andrew Jackson.  Probably the only musical that will ever feature a stuffed horse hanging over the orchestra seats, Werle's design is the best environmental set since Cabaret (1997) and Cats.  That said, it will be no shame that The Book of Mormon will win.  Like the show itself, the sets are a great blend of old-fashioned and modern humor.  I can't speak for Mike in this case... 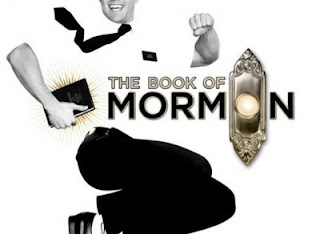 Best Costume Design of a Musical
Jeff and Mike:
Should and Will Win: Tim Chappel and Lizzy Gardiner, Priscilla Queen of the Desert

The only shocker of this category is that The Book of Mormon is in this.  Really?  A no-brainer, Priscilla's costumes are a great old-fashioned Broadway extravaganza of creativity, visual laughs, and the finale alone is Tony-worthy.  Plus, it is all this woefully overlooked show will get to take home tomorrow.

Best Lighting Design of a Musical
Jeff and Mike:
Should and Will Win: Brian MacDevitt, The Book of Mormon

For me the best lighting of the season wasn't even nominated: the brilliant, environmental work of Bloody Bloody Andrew Jackson.  But the bright, cheerful and appropriately large-scale of The Book of Mormon is not only Tony-worthy, but easily recognizable to voters who don't know what they are looking for.

Best Sound Design of a Musical
Jeff and Mike:
Should and Will Win: Brian Ronan, The Book of Mormon

The mother of all categories no one really understands.  Not that it isn't worthwhile; it is.  But it is one of those things where if it is done well, you shouldn't notice, and when it is bad, you can't stop talking about it.  This will win because voters love the show, and why not?  But it should win because if you think about it, so much is going on all the time in BOM, you can still always hear it, you can always tell who is talking/singing, and there are several riotous sound effects that work like a charm.

The best part about the acting categories this year is that there is virtually no filler, with each nominee doing great work.  That isn't to say there weren't noticeable omissions, but there are only a limited number of slots.

Best Performance by an Actor in a Featured Role in a Musical
Jeff:
Should and Will Win: John Larroquette, How to Succeed in Business Without Really Trying
Mike:
Should Win: Colman Domingo, The Scottsboro Boys
Will Win: Rory O'Malley, The Book of Mormon

Popular in the Broadway community, I can totally see O'Malley getting the award, and he was good, but there were others even in his show who were more memorable.  I think Larroquette deserves to win because his comic skills are top notch, he's a game singer and dancer, and matches his Tony-ignored co-star charm for charm.  Except for maybe Godley, this is one tight competition, and Mike is right.  Domingo was pretty impressive in Scottsboro, though McClendon will probably help cancel them both out.

This is probably the tightest race of the night.  Any one of the five would be worthy.  Clark showed off her comedic talents, LuPone proved she can be a team player, lots of folks are saying Blanchard is the best Hedy LaRue Broadway has ever seen, and Nikki James was amazing in BOM.  But I said it when I was walking out of the Belasco Theatre: Laura Benanti will win the Tony.  I am sticking to it.  But if Mike is right, it is fine with me; James is really Benanti's toughest competition.

I sound like a broken record, but this is a tight race.  Anyone on the list is worthy.  But no one saw Henry's rich performance live, and I think Gad and Rannells might split votes.  If not, Gad will probably take the prize, owing to what I call the "La Cage" effect.  Gad has the showy role, like perennial winner Zsa Zsa, but Rannells is terrific in the harder, more subtle, "Georges" role.  Of the two, I think Rannells deserves it.  But I think Tony Sheldon should get it for an all-encompassing, singing-dancing-acting tour-de-force that also brings so much extra to a drag role.  But, if the Mormon boys cross each other out, or if voters want to give CMIYC a prize outright, Tony favorite Butz will become two-time Tony winner Butz.

Best Performance by an Actress in a Leading Role in a Musical
Jeff and Mike:
Should Win: Donna Murphy, The People in the Picture
Will Win: Sutton Foster, Anything Goes

It has been a light year for leading actress roles in musicals.  The critics loved her, audiences lover her, and the Tonys LOVE her.  She's overdue since Millie.  But I thought she was acting and in a role for which she is ill-suited.  Technical perfection is nothing compared to artistic perfection.  Ask Donna Murphy, who virtually disappears in what amounts to two roles, and gives her best performance since Passion.  The Tonys love this lady, too.  And she's overdue, too.  Could this be the night's biggest upset?

Best Revival of a Musical

Jeff and Mike:
Should Be: How to Succeed in Business Without Really Trying
Will Be: Anything Goes

For both of us, this is a no-brainer.  We were bored to tears at Anything Goes, and were entertained from curtain to curtain at the vastly superior How to Succeed.  I'm keeping my fingers crossed that the voters will feel so bad that the nominators didn't give Daniel Radcliffe his due, that they'll see the light and do the right thing.

Best Book of a Musical

Jeff and Mike:
Should and Will Win: The Book of Mormon by Trey Parker, Robert Lopez and Matt Stone

This is probably the most clear-cut category of the year.  A tribute to the old-style musical comedy while taking us slyly into the future, this book is near perfection - fat-free, outrageously funny, and with a heart and message.  It is the most complete package in years.

What a difference a year makes!  Four viable scores nominated, with a fifth, Catch Me If You Can, certainly a contender any other year.  I can honestly say that I like each for their various and considerable charms.  Yazbek's Verge score is terrific, and the Sister Act score nails the 70's sound.  But it really comes down to the season's two best musicals.  Mike foresees an upset, and I would be thrilled.  This may be Tony's nod to the show and to its legendary composing team.  I suspect that Mormon  will rule the day once again.

Best Musical
Jeff and Mike:
Should Win: The Scottsboro Boys
Will Win: The Book of Mormon

Frankly, if either wins, we will both be OK with it.  We both loved The Book of Mormon, but both frequently recall the moving, numbing brilliance of The Scottsboro Boys, an artistic triumph, to be sure.  At least Mormon is also a triumph - American musical comedy at its best.

So there you have it!  How do our picks compare to yours?  Let me know! 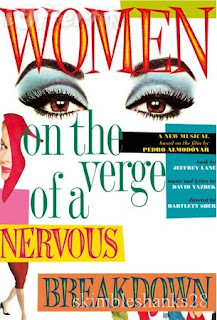 And be sure to stop by this blog all throughout Tony Sunday:
Comments?  Leave one here, email me at jkstheatrescene@yahoo.com or Tweet me!
Jeff
2.285
Posted by JK at 12:31 PM