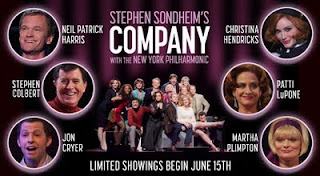 Including last night's filmed version of the NY Philharmonic production of Stephen Sondheim's Company, I've have the great fortune of seeing 4 professional productions of this classic musical.  Company is probably my second favorite Sondheim score (Sweeney Todd being the first), and so I looked forward to this particular production since the second it was announced, figuring that at least a live recording would be made.  Then, miracles of miracles, it was announced as a film that would play theatres across the country!  Of course, the reason to look forward to this particular production was that it featured one of the world's most celebrated orchestras under the baton of the truest musical director of Sondheim musicals, Paul Gemignani, and using the glorious original orchestrations of Jonathan Tunick.  The wait was worth it, and I was not disappointed.

Hearing that score, the underscoring and "the vocal minority" background choral accompaniment through a crystal clear sound system gave me wave after wave of goose-bumps and smiles.  It was a true thrill to hear it the way it was meant to be and not pared down due to budget restraints or directorial concept.

Of course, Company is a book musical, not through-composed, so attention must be paid to that as well.  And I am happy to report that director Lonny Price and his terrific cast have not only nailed the pathos and darker undercurrents of the show, but they have also brought the sense of humor - cynical and "New Yawk" as it is - back to a piece that has, in more recent productions, become mired down in the long-running quest to demystify the Sondheim influence.  As with Sweeney Todd, and all of his musicals, really, Sondheim's darker side is much deeper and more interesting when coupled with the sense of wonder and humor that his shows have.  That couldn't be more true than with this particular production of Company.  Joanne's cynical bitchiness is much more interesting when you get to see the way she uses humor like putty that holds her cracked veneer of harshness precariously in place.  Amy's terror at taking the plunge is always played for laughs, but when the actress playing the role is allowed moments of soul-searching seriousness, it makes her ultimate decision that much more clear and understandable.  And, of course, showing a delight and love and sense of humor for all of his relationships makes each and every one of Bobby's couple-specific mood swings and life-changing realizations much more "everyman-relatable" than when he is played as a one-note self-loathing/self-absorbed/self-questioning bore (in other productions, it has been a take your pick of any of the three - at least here, Bobby is a mix). 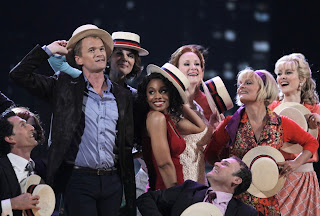 The Company Company
Price's direction is complex in its emotional depth, but it and the choreography, by Josh Rhodes, have a light, breezy air about them.  Set on the large stage with several love seat size set pieces (i.e. big enough for a couple, but a third party is squeezed in - get it?) that are moved into various configurations, the show is in constant motion, even, at one point, with the couple moving across the screen not unlike a roller coaster.  Similarly, Rhodes' choreography seamlessly slides in and out of the action.  Particularly terrific in this production is the inclusion of "Tick Tock" featuring leggy dance dynamo (and down to earth Kathy) Chryssie Whitehead in an homage to role-creator Donna McKechnie, along with other equally lithe chorus girls who gyrate in silhouette behind silky slips of material. As quickly as they appear, they vanish, just as a night of passion ends when he rolls over and she dreams of being cuddled.  "Side By Side," prominently featured at the Tony Awards, was a much grander affair in the film - longer and better executed - especially the hilarious and astonishing lifting done by Stephen Colbert, Martha Plimpton and Neil Patrick Harris.
The cast is, not too surprisingly, uniformly good, with each individual's strengths being played up and their weaknesses covered well.  Vocally, it is probably no surprise that Broadway regulars Craig Bierko and Aaron Lazar sound the most robust of the males, and they add much to the male-centered numbers.  Their roles are small, but both do wonders with what they have to work with, particularly Bierko, who plays the penultimate "homosexual" scene with a clever and sexy off-handedness.  (That scene has some extra laughs and weight with the very open knowledge of Harris' sexual orientation.)  It took me some time to warm to Jim Walton's Larry, with the actor visibly swinging to the orchestra's playing several times, as if he were attending the performance instead of being in it.  But it became clear during the scenes that surround "The Ladies Who Lunch," with his actions more a defense/response to Joanne's coldness.  And his willingness to be "out there" even at the risk of his wife's disdain makes his command of her when they exit both poignant and believable.  Jon Cryer and Stephen Colbert both have thinner vocal instruments than the rest of the cast, but neither sound horrendous and both make superb use of their finely tuned comedic talents - no short order considering the forces of nature their "wives" are.  Cryer's dry delivery during the pot smoking scene is a smart and riotously funny counterpart to the silliness around him, while Colbert's wide-eyed look only makes his character's sharp observations all the more funny.  Both also have a natural ease with physical humor, which is used to excellent effect here. 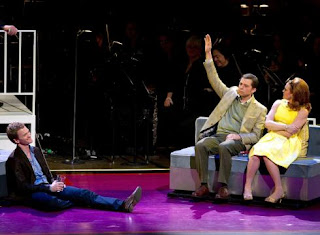 Neil Patrick Harris, Jon Cryer and Jennifer Laura Thompson
The much advertised inclusion of TV star Christina Hendricks was definitely worth all of the ink it got.  The girl delivers!  This curvaceous babe is a delicious mix of air head, self-aware sexiness and an underlying shrewdness.  Her April may not be the sharpest knife in the drawer, but she has learned from her experiences with men, and one senses that she is toying with and manipulating them even more than they think they are manipulating her.  She has a character appropriate singing voice to go along with that vapid stare and breathy speaking voice.  In short, get this gal to Broadway and fast!  As Bobby's other two girlfriends, Kathy and Marta, Chryssie Whitehead and Anika Noni Rose are a sensational contrast to each other, which adds to the colorful fabric of the show.  Whitehead manages to make sensible and kind interesting, while one can completely believe that at any second Rose's Marta will go off like a firecracker.  As mentioned, Ms. Whitehead does a superb dance solo, while Rose's assured delivery of "Another Hundred People" is a highlight of the entire production.

Broadway regulars Jennifer Laura Thompson and Martha Plimpton are truly a joy every single second they are on screen.  Both mine laughs with every line, look and pause, and they both have considerable physical comedy skills.  One could easily see them in a musical about I Love Lucy with Thompson as Lucy and Plimpton as Ethel.  They also work so well with their "husbands" it felt like watching two very real, very flawed marriages unfold before us.  Jill Paice is all sweet Southern charm as Susan, and coyly allows us to see that there is some venom in that sugar.  She also does a nice solo in "Not Getting Married."


Martha Plimpton, Neil Patrick Harris and Stephen Colbert
If you ever had any doubt why Patti LuPone and Katie Finneran are beloved and multi-award winning stage stars, this production should clear that up for you.  Finneran's signature laugh and vocal ups and downs are played to hilarious effect throughout the show, but it is her ability to turn serious at the bat of her pretty eyelashes that makes this Amy not just hysterical, but very human.  It goes without saying that her performance of "Not Getting Married" is a solid show stopper.  Meanwhile, Ms. LuPone adds her high voltage presence along with a knack for blending in, too.  And I have no doubt she was as superb as ever live.  But it is her performance as captured on screen that makes me so glad to have seen this version.  I doubt seriously that anyone past maybe the first three rows at the cavernous Avery Fisher Hall could see the best part of her brilliant performance as Joanne.  Sure, her loud, overbearing, boozy qualities probably rang to the rafters.  But the up close shots of her face - with lightning fast betrayals of her breaking strength, and also her almost ravenous taking in of Bobby before her bold proposal - really allowed us to see a vulnerability and years of hiding it that would be missed by most in attendance.  The result is probably the most well-rounded Joanne I've ever seen (though Barbara Walsh in the revival was smashing).  And LuPone's delivery of "The Ladies Who Lunch" gives me shivers even as I write this.  Patti LuPone is one of America's greatest treasures, period.


"Everybody Rise!": Patti LuPone as Joanne
Still, every production of Company hinges on its Bobby, and with the boy wonder of Broadway, Neil Patrick Harris in the role, the show goes to glorious heights.  Like Ms. LuPone, his performance benefits greatly in this medium.  You can see every nuance of emotion every time the camera hones in on his face.  Just look at his eyes, and you can see the truth in this Bobby, even if the rest of his physicality suggests other feelings.  It helps that he is seriously handsome, boyish, but manly, and has a charming ease about him.  Gone is the brooding, moody Bobby of Companys past.  Here we have a Bobby that gives as much as he gets; as demonstrative as he is observational; as close as he is distant.  His Bobby is likable and so easily adaptive, one can understand immediately why these couples of a wide age range are drawn to him equally.  Harris' ease and charm translate well to his dancing and singing.  He may not have the vocal strength of Raul Esparza  or other previous Bobbys, but he is no slouch, either.  His rendition of "Mary Me a Little" may be close to definitive, and his "Being Alive" is as honest as you'll ever see.


Neil Patrick Harris
Perhaps it is Harris' natural charm and real-life baggage that makes us love him so, but it is his charisma and dedication to all things Broadway that is making him a true stage star.  All of that probably influences the audience to adore his Bobby that much more easily.  But it is his considerable skill that makes it truly understandable why his friends are so crushed when he doesn't come to their party, effectively moving on without them.  And we also understand and applaud this Bobby's final relieved smile as he sits alone on a two person love seat.

Comments?  Leave one here, email me at jkstheatrescene@yahoo.com or Tweet me!
Jeff
2.293
Posted by JK at 3:15 PM