Soon, a second play that deals with the use of language will open on Broadway.  Last week, I talked about the first to open - Chinglish - and now I'll take a look at the logo for the new play Seminar, which is currently in previews.

First, let's look at the logo itself.  Notice that the background is bright white, not unlike the paper used to print documents of high quality.  Certainly, one would use this type of paper to submit an important document - a resume, a term paper, a novel.  In fact, the titular seminar is about writing a novel.  Next, what is interesting about the color is that it is used in the negative.  Bright blue against white is also an excellent choice.  And the font is a striking and simple one.

The best playwrights ask their audience to participate in the meaning of the work by taking a closer look at what they see beyond the literal.  They ask us to look for themes and ideas that not only fit the play, but are also a larger part of the human condition.  Seminars themselves often address the very same thing.  Cheekily, the creators of this logo literally ask those interested to look closer.  As I said, the title is in negative relief.  A closer look at that bright blue reveals words all jumbled together.  Among those words are such universal ideas as "money," "power," "seduction," "temptation" and "love."  All that is missing is "sex" (which might be crammed in there).  All of those are also novel-selling buzz words; all of those might just make seeing this play a ticket-seller, too.  And just in case you miss all those words, some of them stick into the blank space, so you have to notice them!

To be honest, the title might be just a bit off-putting.  Let's face it, seminars are rarely associated with entertainment, and the title alone probably wouldn't draw much attention. (The "a new comedy" tagline does help.) And so the producers are quite wise to make sure that the star's name is always in close proximity to the title.  And Alan Rickman is a star - an internationally acclaimed stage actor, sure - but a movie star who, as a part of the highest-grossing film franchise ever, played a wicked teacher.  Who better to draw an audience to a play called Seminar? 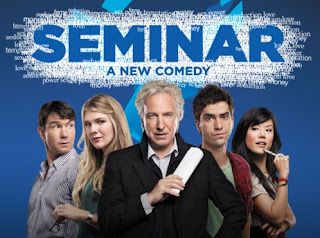 Print ads are also featuring the rest of the cast in character poses, revealing story and relationships, one assumes.  But theatre and TV fans will also likely recognize three of the supporting cast right off.  Lily Rabe is on quite a roll with a series of acclaimed performances (will this be her Tony-winning performance at last?).  And TV and film fans will surely recognize Jerry O'Connell and Hamisch Linkletter (who is also making quite a name for himself on the stage of late, too). Those ads also capitalize on the at same logo, only this time, white on the eye-catching blue.  It is good marketing.  On a flyer or print ad, the color is to draw your eye, the photo to make you choose it and maybe buy a ticket.

All of those things make me very interested in seeing Seminar, but would it appeal to many more than the serious theatre-goer or Harry Potter fan?  I hope so.  Despite a clever logo and appropriate ad campaign, I think the show will have to rely on word-of-mouth and quotable reviews.  So far, I've heard great things about the show in the chat rooms.  Get that word-of-mouth started, fans!

Rate this blog below and leave your comments here, or by email at jkstheatrescene@yahoo.com or Tweet me!
Jeff
3.074
Posted by JK at 11:11 AM