On the Radar: Ghost Brothers of Darkland County

Just the other day, I blogged about how many composers this season would be represented by two or more shows.  You'd expect names like Lloyd Webber and Schwartz - they are popular and prolific composers.  But who would have thought that the name Stephen King would be associated with two musicals being produced in the big time in New York and regionally?

Here's how the press release explains the quintessentially King story: "In the tiny town of Lake Belle Reve, Mississippi in 1957, a terrible tragedy took the lives of two brothers and a beautiful young girl. During the next forty years, the events of that night became the stuff of local legend. But legend is often just another word for lie. Joe McCandless knows what really happened; he saw it all. The question is whether or not he can bring himself to tell the truth in time to save his own troubled sons, and whether the ghosts left behind by an act of violence will help him – or tear the McCandless family apart forever."

I've let it be known just how much I'm looking forward to the re-boot of Carrie, the 1989 musical based on the classic King novel.  Though it hasn't been 22 years, it has been several since the musical Ghost Brothers of Darkland County has been announced - most recently for the 2008-2009 season.  That was until a day or two ago when some casting for a now definite production of the show was announced.  They say good things come to those who wait, and I hope that will be so true for this pair of thrilling new productions. 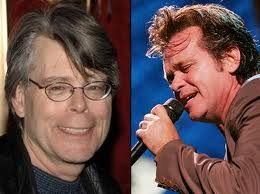 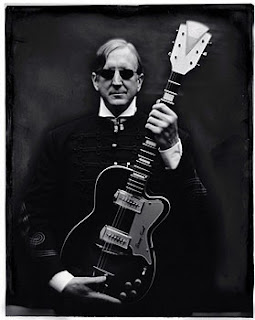 Stephen King, John Mellencamp
T. Bone Burnett
So why am I so into the idea of King's work as musical foundation (his novel is the basis for Carrie, he is writing the book for Ghost Brothers)?  Well, first and foremost, he is a master of suspense and thrills with an amazing knack for using his genre as a springboard for social commentary.  He is, perhaps the Sondheim of modern scary stories.  Second, I think Broadway is ready for the next great musical thriller.  Here's hoping for a Sweeney Todd for the 21st century! 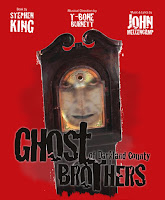 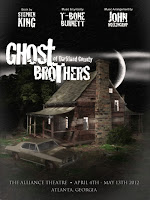 Three different posters for the show
(Note: The grey poster has the credits incorrect.
Mellencamp is doing music and lyrics, not Burnett.)
Of course, a musical isn't just a book.  It is songs, and I can't think of a more natural fit for a Stephen King story set in the Southern heartland than a master of American heartland rock, pop and (even gospel) John Mellencamp.  A pop artist from the 80's (when he was Johhny Cougar), he proved he could write character and story with a little ditty called "Jack and Diane."  He can write infectious rock that makes impossible to sit still to - "R.O.C.K. in the U.S.A." among others.  And he can write moody, thematic, message-driven music - "Pink Houses" among still others.  His voice (in writing, not on recording) has the pulse of America - the real America, warts, problems, triumphs and all - urgently pumping through everything he does.  And the same can be said for King, who has his finger firmly on the pulse of decades of pop culture.  Add arguably one of the most acclaimed record producers of all time, T. Bone Burnett, as musical director, and it seems that the show has very firm roots.

Emily Skinner (Billy Elliot), Shuler Hensley (Tarzan)
and Guarini (American Idiot)
Now, with its first major production due at the Alliance Theatre in the spring of 2012, with a cast being led by Shuler Hensley, Emily Skinner and Justin Guarini (all three among my favorite Broadway performers), it looks like Ghost Brothers of Darkland County is well on its way!

Rate this blog below and leave your comments here, or by email at jkstheatrescene@yahoo.com, or Tweet me!
Jeff
3.073
Posted by JK at 12:01 PM

Labels: Ghost Brothers, On the Radar