OUT Magazine's OUT100: The Broadway Connection

UPDATED!  SCROLL TO THE BOTTOM FOR THE MOST RECENT ADDITION.

OUT Magazine has come out (no pun intended) with its annual list of the 100 most influential LGBT (as well as a few "straight" individuals) members of the community who have contributed significantly to society in the past year.  I suppose it isn't too surprising that the New York theatre scene is well represented on the list.

As of this writing, the magazine is offering only a preview of the list, with photos by Gavin Bond, which are based on other famous photos.  Even within the short preview, there are 7 theatre people featured.

Not pictured (so far) but mentioned in the associated article are Larry Kramer and Sandra Bernhard.

Kramer, an author, playwright and activist, was selected for his enduring voice in the fight for rights for people afflicted with AIDS, as well as gay marriage.  This year, a stunning revival of his masterwork The Normal Heart marked his Broadway debut, winning the Tony for Best Revival of a Play.  His continued relevance is inspirational.

Bernhard, actress, comedienne and activist was selected for her continued campaign for equality and for bringing her message to the mainstream.  A New York fixture, Bernhard's stand up act is a perpetual sell out  and she has appeared in several off-Broadway shows, including one-woman shows and Love, Loss and What I Wore.


As the OUT100 list is revealed, look for more of this blog, and possibly follow-up blogs.  To see more go to: www.out.com/out100. 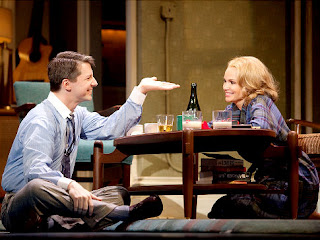 In Promises, Promises, Chuck Baxter finds out that Fran Kubelik loves basketball (just like Lysistrata Jones and her Athens U friends!).  All of the following actresses have played Fran Kubelik in New York or London, EXCEPT:

Rate this blog below and leave your comments here, or by email at jkstheatrescene@yahoo.com, or Tweet me!
Jeff
3.066
Posted by JK at 9:01 AM