The Smash-hit Comedy SEMINAR Is Now Starring
JEFF GOLDBLUM
and
YOU CAN WIN TICKETS
TO SEE IT ON BROADWAY! 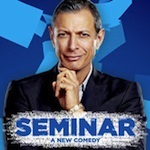 Joining him are JUSTIN LONG (He's Just Not That Into You, Going the Distance) in his Broadway debut, ZOE LISTER-JONES (NBC’s "Whitney," The Little Dog Laughed), JERRY O’CONNELL (Jerry Maguire) and HETTIENNE PARK (Tony Kushner’s The Intelligent Homosexual's Guide).

And JK's TheatreScene is pleased to present you with the chance to see the show for FREE!  That's right!  Today begins a new contest for tickets to see one of Broadway's hottest new shows! 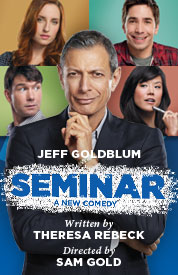 
1.  Seminar's playwright, Theresa Rebeck, created and writes for which which popular TV series?


2.  Jeff Goldblum made his Broadway debut in what 1972 Tony Award-winning musical?


3.  Justin Long, who is making his Broadway debut in Seminar, is probably most famous for his commercials for:


4.  Although this is Jerry O'Connell's Broadway debut, he's been acting since he was a child.  As a child actor, he was in which film based on a Stephen King story about a group of boys searching for a dead body?


5.  Seminar is playing at the Golden Theatre.  The most recent show to play there before Seminar was:


Answer all five questions and submit them as directed above by 6PM, Wednesday March 29!

DON'T WANT TO PLAY, BUT WANT TO SEE THE SHOW?
CLICK ON THE TICKET DISCOUNT BOX TO YOUR LEFT
(SCROLL DOWN!)