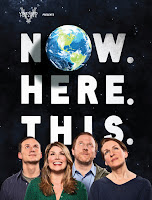 
Ah... the kids are growing up.  There is no denying that the gang behind [title of show] has started to mature, and as with anything in life, that maturity comes with some benefits and a few growing pains, too.


Although [title of show] has almost nothing in else common with Now. Here. This., the fact that it centers around the same four people playing themselves makes comparisons, fair or not, inevitable.  First, I suppose, a kind of disclaimer must be made here:  I love these four people.  I feel like I know them, despite being very consciously aware that in both shows, they are playing theatrical versions of themselves.  That, in both shows, the best moments are those where they bare their souls with some pretty personal stuff tricks you into thinking you know them like they are really personal friends.  And with their first outing, I really bonded with them because they, like me, are loud and proud theatre geeks. 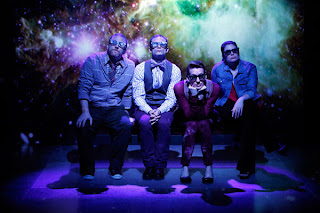 Alas, this time around, there aren't many references to theatre at all.  And there also isn't a real story, just a framing device that seems forced and completely foreign to the four people I thought I knew.  This time around, the gang is using a Groupon to enjoy the Museum of Natural History.  And along the way, they find common ground with various exhibits, and flashback to events in their lives that have brought them to now. To this place. To this moment.  Get it?  To be honest, this framing device might have seemed clever had this been our first time with these people.  Instead, it feels very distancing, especially since the most affecting scenes and songs are all of the solo moments.  All four are in the same museum, at the same time, and use the "moment" to share their personal recollections.  The result is that we are catching up with a group of friends separately.  A lot of what made them so lovable "before, there, that," was how great they are together. 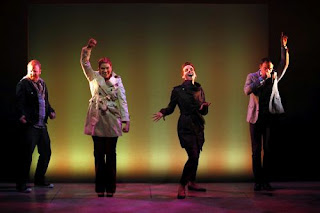 Sure there are many times when all four sing together (the way they harmonize remains a delight to the ears - thanks to superb vocal arrangements by Jeff Bowen and Larry Pressgrove).  And most of the big laughs come from the witty, blink-and-you-miss-it jokes contained in Bowen's truly riotous lyrics.  The opening number, "What Are the Odds?," for example, morphs into a 60's/70's style dance number not unlike something you'd have seen on Laugh-In or maybe The Sonny and Cher Show.  In fact, Bowen's songs and lyrics are mostly as good as in the other show, perhaps even a little better.  The man has a way with cramming a ton of lyrics into a little space, and with finding lots of grains of truth in the most mundane details of every day life and in an abundance of pop culture references - mostly relatable to those of us in the late 30's-early 40's age bracket.  (References to Tootsie, Mutual of Omaha's Wild Kingdom following The Lawrence Welk Show, and to Brenda Vaccaro and Lola Falana probably go over the head of anyone born after 1977.)  That specificity of details and pop culture references also abound in the book by Hunter Bell and Susan Blackwell.  Oddly, and wonderfully, that much detail actually makes most of the show accessible and somehow universal.

Still, it is the quiet, reflective solo moments that are the most resonant and emotional.  And, in one of the better signs of growth among the creators of the piece, these really revealing moments fit the context of the scene comfortably and yet you never see them coming.  The effect is divine - that element of surprise adds to the power of each emotional punch.  You have Hunter hiding his insecurities in a vivid fantasy life - a dream boyfriend named Archer, getting caught masturbating to Lee Majors, etc.  Then there's Jeff, who hides his secret with what he calls "Dazzle Camouflage" - charming and joking and deflecting his way deeper into the closet.  Heidi recalls disappointing her lawyer father by not joining the family business and living with her fiancee before they are married and, sadly, that father-daughter never say that they love each other.  She and Hunter also recall - in one heck of a tear-jerking, song-less scene - the loss of a loved one.  (Here, those details I mentioned were particularly poignant - tongue moisteners, dry, cold, papery feeling hands, etc.)  Maybe because Susan is so brash and bitchy it is her revelation that packs the most emotional punch - the ultimate "ah-ha!" moment in the show - when she reveals why, to this day, she has a fully scheduled life, and why she keeps people at a certain distance.  Recalling her most painful childhood memory leads to a stunning reveal that immediately endears her to you as never before.

All four remain relatively unchanged from our last get together.  Hunter Bell is still a cuddly teddy bear, his self-deprecating humor endears and tickles.  Jeff Bowen is still the cutie pie in the bow tie - a thin veneer for the hot rent boy he could be (and as fun as that would be for a few minutes, I'm glad he's a good guy after all).  Susan Blackwell is still the ultimate fag hag, leaving no bitchy barb unspoken, and still has those moments of softness that make you want to hug her anyway.  Her moments of creative revelation betray a sweet softness.  And, my personal favorite, Heidi Blickenstaff, remains an interesting mix of dreams, regrets and worry about what others think.  Best of all, as a unit, the four still complement each other completely, leaving one to wonder how they deal with life without each other. (Maybe this could be a third show topic?)

The other signs of growth fit this piece like a glove.  Neil Patel's set, a dark box that allows space for some really nifty projections by Richard DiBella, and some nice lighting by Jeff Croiter and Grant Yeager, also allows for rapid changes between several museum locations and "real life" locations.  Instead of Larry on the lone keyboard upstage, he is sequestered in a booth next to the audience with a four piece band.  The songs in this show are more complex and the addition of an orchestrated score adds to the show a great deal.  (I wonder if they will record this?) 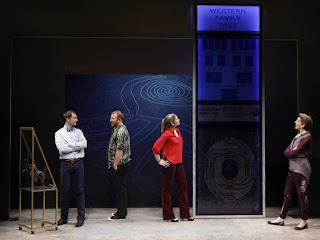 Michael Berresse's deft direction keeps things moving at quite a clip, pausing only to add impact to those more "important" moments.  His choreography is serviceable, recalling carefully calculated chess moves more than actual dancing.  Who knew there were so many permutations for moving 4, 3, 2 or 1 person in a completely even way?

There is something decidedly more stage-y about Now. Here. This. and less organic than [title of show].  And I guess there is some irony in the fact that the first show, about creating a show, is less theatrical than this new one.  Irony or not, this newer show's theatricality is distancing.  Still, it was great to get together with these old friends again (I wouldn't mind it again in a few years, actually).  And they are right: you get more out of life when you focus and savor what is now, right here, in this moment.  But I really miss [then there that].