Evita remains the best score in the Andrew Lloyd Webber canon, and the razor-sharp, witty and no-holds-barred lyrics remain the best of Tim Rice's.  That they have been re-captured in tight, majestic and visually thrilling revival only serves to demonstrate that a truly great show is one that can be presented in a completely different way from the legendary original production.  (The same can be said for the recent revivals of Follies and Sweeney Todd.)  Purists, of course, will lament and disparage the absence of the familiar, while others of us not stuck on ghosts of Broadway past will feel free to judge this version on its own merits. That's not to say that this new incarnation shouldn't be compared to the original - I will do so on a few points - but to dismiss one in favor of the other does both productions and the piece itself a huge disservice. 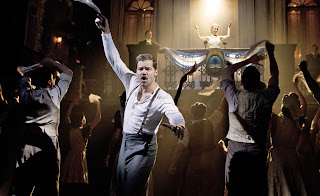 Visually, the production manages to capture both the enormity of this larger-than-life story of international power and corruption and the intimacies of an individual woman's rise in her quest for fame and fortune.  Considering how huge the Marquis stage is, this is remarkable in and of itself.  Christopher Oram's town square set allows for the action to take place at several locations, often at once.  The three sides are giant buildings with a terrace of playing space all around.  The buildings themselves take on different personas - a hotel/boarding house with a big door for lots of foot traffic, Peron's home with a large staircase for dramatic exits of mistresses, and upstage at the top the balcony of the Casa Rosada, home of the iconic "Don't Cry For Me Argentina" scene.  Beneath that, inconstant view are tall, thin alley ways, dark and smoky that allow for the entrances and exits of the people - sometimes, the upper class; others, the ominous military; and still others, "the descamisados" - the seething masses of Argentinians, who come and go as need and political and military climates change in this volatile state.  The smoke-infused, sensual lighting design, often employing back-lighting to create sinister shadows is designed by Neil Austin.  Along with a masterful use of shadow, he also uses spotlights with pinpoint accuracy to focus on individuals, as well as to create pools of light that suggest still more locales at once.  Oram's costumes also contribute to this enormity as the large ensemble switches back and forth between roles.  Most interestingly, the costumes also serve to compliment the dancing, with the sharp lines of the men's suits and the dresses of the ladies cut to celebrate their curves while allowing their long, sensual legs to be revealed beneath swirling skirts.

That dancing is choreographed by the often under-appreciated Rob Ashford, who keeps every number moving in dazzling sequences of Argentine tango, militaristic marching formations, and Latin-infused Broadway moves.  The company of actor/dancers in this production of Evita is exemplary, more than up to the task of playing multiple roles, each a triple-threat of precision, passion and panache.  Highlights include the thrilling "Buenos Aires" and "And the Money Kept Rolling In."  The menacing wrestling match moves of "The Art of the Possible" offers a subtly of danger and machismo that the original's game of musical chairs missed.  And "The Waltz for Eva and Che" is sexy and breath-taking - a reminder that a Eva is no longer struggling to gain power but for life itself.  Ashford's brilliant choreography matches Michael Grandage's stylized direction to a "t."   Between dances, Grandage makes full use of all of the playing spaces in such a way that that action flows seamlessly, only stopping occasionally to make a point.  And at all times, he has a constant eye for amazing stage pictures.  Like Eva Peron frequently did, each scene pauses for a well-thought out "photo op" - an ingenious way to subliminally match the action to the woman who has brought us together for an evening of grand theatre.


All of this high quality technical theatre and dynamic staging would lose much of its power without a well-cast corps of principal actors.  A sweet counterpoint to all of boldness of the females onstage is Maya Jade Frank as the child soloist who begs Eva for assistance.  Her voice suggests that as an adult she could play the title role in the next Broadway revival - sweet but powerfully expressive.  The same can be said for Rachel Potter, whose plaintive voice lends itself perfectly for the scorned Mistress, who sings "Another Suitcase in Another Hall."  She gets a well-deserved hand at the end of this number.  As tango singer Magaldi - and Eva's first toss off - Max von Essen does fine vocal work and demonstrates equally fine dance skills during the "On This Night of a Thousand Stars/Eva, Beware of the City" sequence.  I always find myself wanting to see more of this guy, no matter what show he is in. 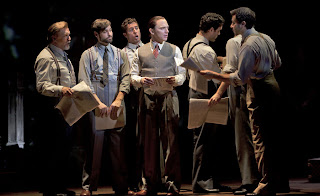 I always find the casting of Juan Peron to be interesting, mostly because it never seems to be done just right. In this case, though, they hit the mother lode with the fantastic Michael Cerveris.  He tackles this complicated terrain with seeming ease.  Our first encounter with him is during the power struggle, "The Art  of the Possible," and we notice that of all the men, he is the smallest, and yet he convincingly "wins."  He then manages to convince as a ladies man even as he is being steamrollered over by Eva.  Then he exudes charm and charisma making it believable that he'd win over a country and take power - but not too powerful so as not to believe that there is imminent danger of a coup any second.  Most importantly, though - and this is where most of the time the role disappoints - we must believe that he has a weak spot in Eva, that we can understand why he is so easily manipulated by her, and believe that his masculinity is strong enough to handle the fact that she rules the roost, not him.  Cerveris navigates this tricky road superbly and in excellent voice as well.


I never thought I'd see an Evita where the weakest link in the production is the leading lady.  And yet, it has come to pass.  Of course, weakest link is relative in a chain as strong as this one.  As Eva Peron, Elena Roger possesses a unique voice, always loud and commanding as one might expect.  However, maybe because this was her sixth show in a six show week, she really struggled with her upper register, sounding literally as if she has just swallowed a balloon full of helium and then hits the high notes.  It is noticeable mostly in act one, where a younger, more vibrant Eva sings higher.  It isn't that you can't hear her, it is simply that the sound coming from her is awkward and on the verge of ugly.  To be completely fair, she pretty much sails through act two vocally, doing a particularly nice job with "Rainbow High," which I was sure would be trouble for her, and she is excellent as her character devolves into death.  There is also a very tangible authenticity to the way she plays the entire role - there is a subtext to her performance informed by actually having lived there and understanding the history as only a native can.  Her accent rarely gets in the way, and is many times, part of her considerable charm.  What it will boil down to for many is this: can she sing like LuPone?  Not even close.  But Ms. Roger's performance is, in my opinion, by far the best acted Evita of the dozen or so I have seen, including many video clips of Ms. LuPone as Evita.  She is also the best dancer, and this "dancer-centric" production capitalizes on this.  She is graceful, sexy, commanding, and you can't keep your eyes off of her.  What more could you ask for from Eva Peron at any age?


For me, the real draw of this production, aside from the beautiful staging, is Ricky Martin as Che.  So much has been made of the fact that this Che is an everyman, not a revolutionary.  I say it adds a layer to this production; no, not "add", but rather replaces a layer.  It makes Evita less overtly political and much more "of the people."  After all, this musical is about Eva Duarte de Peron not her husband.  She is an "of the people" gal, and that folksy spin was her stock in trade.  With Che as one of the people, it provides a balance to the blind fervor with which the citizenry followed this charismatic and profoundly flawed woman so blindly.  Martin brings, as you'd expect, another layer of authenticity to the role as a Latino himself as he blends into the rhythms of the score with dancing skills unlike any Che before him, and as his bold, clear voice takes him in and out of and apart from the action.  The blending in and out of Che allows the focus to be where it needs to be at all times - he only interrupts here to make his point.  He doesn't linger, overact or do things that make you look at him when you should be looking elsewhere.  Martin is also charming and charismatic, matching Eva point for point.  I think that is an important and heretofore ignored dynamic: Che and Eva come from the same roots, and look at how different their lives turned out.  An excellent, thought-provoking point for my money.  Again, for fans of the original it will come down to how Martin compares to Patinkin.  For me, there is no comparison, as I find Patinkin in any role to be self-indulgent beyond the needs of the script and score, generally satisfying his actor ego first and thinking of the show second.  Can Ricky Martin sing like Mandy Patinkin?  Not at all.  How much you like the latter's voice will inform what you think of the former, I suppose.  Can Ricky Martin command the stage as Che?  Yes, and in most ways better - you can actually forget you are watching Ricky Martin and see Che.

And so, as I said at the beginning, how much you are willing to let go of the original production (and every knock off since then) will probably determine how much you like this version.   That it has done so with amazing acting, singing and dancing is to be expected on Broadway.  That it has done so by challenging your senses and what you thought you knew about the subject is the unexpected pleasure of this terrific production.  How thrilling to see that something different and equally viable can be done with one of the better musicals of the late 20th century.