REVIEW: Into the Woods (Centerstage, Baltimore,MD)


Remember when you were a kid and you'd see a toy in the store that looked like so much fun you just HAD to have it?  The box promised hours of fun and everyone on the box looked so happy.  But then you'd get it home and it was nothing like what the box promised.  It was impossible to put together, and even when you got it together, it wasn't all that fun.  Remember that disappointment?  Well, that's how I felt after my visit to Baltimore's Centerstage to see its production of Sondheim/Lapine's Into the Woods.


One of my favorite shows, I've been in love with the piece since I saw the fourth preview of the original Broadway production.  And I've heard nothing but great things about Centerstage, one of the country's most celebrated regional theatres (and it is an impressive operation by all counts - New York caliber all the way).  And it is put together by a very well-respected director, Mark Lamos, in a joint production with another highly respected regional theatre, the Westport Country Playhouse.  In short, "the box" on this "toy" looks like an exciting new visit with an old friend.  And what a dull, by-the-book visit it turned out to be. 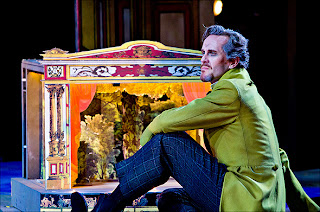 In what is becoming the most disturbing trends in theater this season or so, this Woods suffers from a great-on-paper concept that is incomplete and uninspired in its onstage execution.  If any show still has a lot to offer in original concepts, it is probably the overflowing Into the Woods.  Here, the idea is that the show takes place in a life-sized puppet theatre, run by a puppet-master style Narrator, who manipulates the characters and the story like the two-dimensional things they are.  We see their three-dimensional, magical appearance as the puppet theatre springs to life before us.  As he tells the story, he moves the characters with a magical flourish of his hands, pulls set pieces on and off the set, and imposes order upon the chaos of all the stories overlapping.  Watching the period costumed Grimm characters come and go in a colorful blur, as they acknowledge and look to the Narrator for approval that they are playing the story correctly, is very interesting, especially knowing how he will soon be out of their lives, and they are left to their own devices in act two, literal puppets with no one to pull the strings.

Not Earth-shattering or even a revelation, the concept is at least interesting to contemplate.  And when Lamos and company are following this concept, it is promise fulfilled.  Unfortunately, it runs out of steam about five scenes in, mostly forgotten and only seriously trotted out again right before the catastrophic events of act two. Sure, the show is good enough on its own to keep your interest, but then again, it isn't as interesting as it could have been.  It should be noted that this production stays pretty close to the original production - no "Our Little World" for the Witch and Rapunzel, no real tweaks to the book, no sign of subsequent revivals.  And were the production as strong as the material, it wouldn't matter. 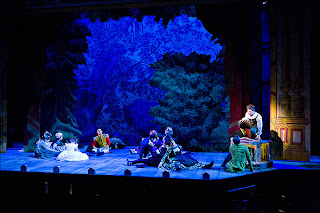 The set (designed by Allen Moyer) is serviceable to the concept, intentionally two dimensional and colorful, as is the lighting (designed by Robert Wierzel).  The lighting features an interesting use of low hanging bare light bulbs that come and go as the characters do, a comment on the story, which is never clearly followed through with, either.  Candice Donnelly's costumes are mostly as colorful and befitting the the package, though they are not clearly of any one period - toy soldier looking princes mingle with those dressed in fill royal regalia; stepsisters wear 80's pastel prom dresses, while mothers roam the stage in outfits with an oddly uniform round silhouette.  But the Witch suffers from start to finish: when she is "ugly," she is wrapped in what appears to be a hand-knit afghan that forces her to hobble about like a pre-butterfly cocoon about to burst.  I'm thinking the idea is that she will emerge from that cocoon, a lovely young woman ready to take on the world.  When she does, her dress (in that odd round silhouette) springs out, revealing what looks like something Maria would wear as she flits about the Austrian Alps in The Sound of Music.  OK, she's pretty, kind of, anyway.  But she is still a witch.  So why is she wearing a silly circle of bright red roses in her hair?  Morticia Addams would be appalled.  I'll be polite and simply mention that Sean Curran provided the, um, musical staging. 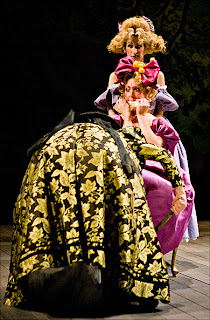 Considering that the cast has some serious Broadway talent in it, I expected a lot more.  Like singing on key, knowing their lines, and some chemistry.  Understand that this production got a full rehearsal period, not a two week throw together.  And when people like Alma Cuervo and Nikki Graff Lanzarone with starring roles on Broadway under their belts have agreed to do walk on roles (The Stepmother/Granny/Giant's voice and Florinda, respectively) you have to have high expectations, right?  As it turns out, the people look better on "the box" than they did in the actual play.  In the small, supporting roles, the cast does what they have to, offering nothing new, but not really harming the show. 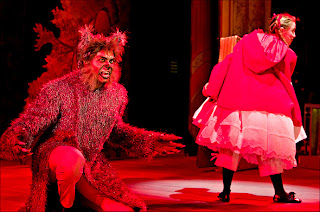 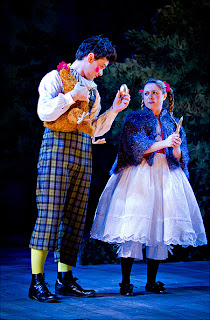 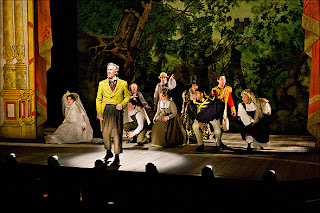 To be fair, there were a few people that really stood out in a very positive way:  Nik Walker makes a very sensual Wolf who finds perfect parallels later as Cinderella's Prince, and Robert Lenzi's Rapunzel's Prince is equally good, finding ways to make his tortured marriage interesting to the rest of us.  "Agony" (both versions) have always been crowd-pleasers, but here, because these guys are so good, the songs dominate each act in ways I've never seen before.  And Justin Scott Brown offers up that rarely seen Jack - one who actually grows up as the show progresses.  Mr. Brown's efforts are clear and add much to the show.  And despite an incomplete concept that he, as the Narrator, is saddled with, Jeffry Denman does a fine job vocally, and is a somewhat creepy presence (though I'm not entirely sure that's what they are going for).

If I hadn't seen Dana Steingold do The 25th Annual Putnam County Spelling Bee as Logaine, I'd probably have been bowled over by her performance as Little Red Ridinghood.  Instead, I was disappointed to see that all she has done is pretty much impose that cute lisp and adult confidence from the Bee onto the kid in the cape.  It works, but I'd like to see her do so much more.  One of the draws of this particular production is Danielle Ferland, the original Little Red, now playing the Baker's Wife.  She isn't bad, really, but she's no Joanna Gleason.  She's warm in that "I bake cookies all day" kind of way, but has virtually no chemistry with her husband the Baker, which makes the chemistry she does have (with the stellar Nik Walker) seem almost inappropriately sexual and lurid, and leaves you more with a feeling of "no wonder she strayed, her husband's a dud," rather than any sense that she is hurting a great marriage.  I'm sorry to say that Ms. Ferland is more of a disappointment than a draw. 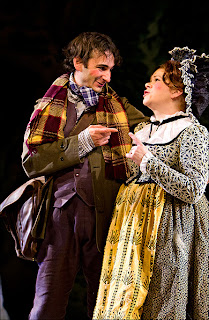 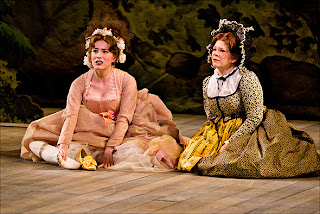 Erik Liberman, as the Baker, has found nothing new in his interpretation of the role.  A shame, really, considering how rich the role is, that he has been directed to be the weak, geekish twerp like so many Bakers before him.  This really impacts the show, considering that his is the central part of the story.  He sings OK, but offers little warmth, and even less in terms of chemistry with his caste mates.  Jenny Latimer as Cinderella is OK, too.  She's pretty, sings well, and even falls naturally.  Then again, she's not an especially  powerful presence.  In short, she does exactly what she's supposed to and nothing more - like provide interest or any sense that we should care any more about her than her stepsisters.  But the absolute worst casting in this production is that of Jeremy Lawrence as The Mysterious Man/Steward.  He is not only bad in the acting and singing departments, he is a very disturbing presence, and not in the "mysterious" way.  He is creepy in that "I kidnap children and do mean things to them" way.  I have literally had nightmares about the Mysterious Man.

Finally, there is the Witch to consider.  In this case, the normally terrific Lauren Kennedy.  I first saw Ms. Kennedy as the girl with a Paramount audition in Sunset Boulevard.  She had maybe five lines, but she created a memorable character, notable for her completeness of character even in the background - it was a full story arc.  Then, I saw her go on for Emily Skinner in Side Show, and she was awesome!  A lovely woman, I couldn't wait to see her play the ugly Witch and transform into the beautiful witch, flaws and all.  Sadly, she looked entirely uncomfortable in both acts, self-consciously saying her lines and over concentrating on her lyrics.  She wasn't particularly funny, commanding or vicious.  And I never once believed that she really cared for Rapunzel.  Worse still, she struggled with the demands of her songs, often going flat and seriously off key. 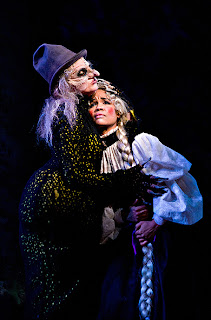 Vocally and musically, the production suffered at the performance I attended.  The actors seemed tired, and the orchestra (under the baton of Wayne Barker) thin.  Perhaps that is because the score is being played by a seven piece orchestra, as opposed to the fifteen piece orchestra credited in the opening night Playbill of the original production or the sixteen members credited in the 2002 revival.  A small orchestra played well, as it was here, doesn't have to be a negative thing (I've seen better productions of this show with only piano accompaniment), but it needn't sound so thin, either.

Given that this is a joint production of two of the country's most respected regional theatres, I had high hopes.  Considering the caliber of the cast, I expected a thoughtfully acted production.  If only the execution of the show had been as satisfying as the promise of the production...