LOGOS: Nice Work If You Can Get It

Nice Work If You Can Get It, currently in previews at the Imperial Theatre, is a very specific throwback of a musical.  It is an original (mostly and meaning written today) show that takes us back to those zany 30's musicals that were star and plot-driven.  Lots of characters, opposites attract, bad guys in disguise, a show biz element, and a sense of "danger" all told in obvious humor (as in you laugh and groan at the same time), with moments of high farce and slapstick physical comedy.  In short, a lot is always going on.  The ending is never in doubt once everyone is introduced, but it is the getting there - plus the sing and dance - that is the real fun.

Today, I thought I'd talk about the show's artwork, which attempts, at least, to recapture that same 30's flavor as the attempts to, too.  I come to this logo with the perspective that I have already seen the show versus having to speculate about what I will be seeing.  (I'll try not to give away anything more than is already in all the press releases.) 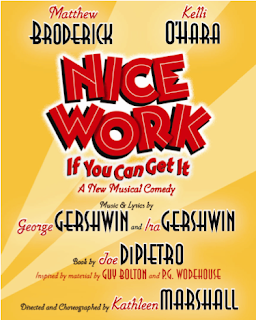 I read an article once that talked about how fast food restarants use color to catch your attention and to appeal to the "hunger" center of your brain at the same time.  Apparently bright yellow and red in combination both draw your eye and make you ravenous - thank you, McDonald's, Wendy's , Sonic...!  And so, when we were approaching the Imperial Theatre last weekend, Mike made a comment about the marquee being a fast food sign.  And in a few ways (which I won't say until the show opens) the comparison is very apt.

Mostly, though, the main colors of a yellow background and a bright red title block serve the logo well in the respect that it is eye-catching.  Considering that the show is on 45th Street, that is key.  There are 6 other shows on the same block vying for the same attention from theatre-goers.  Besides being bright, yellow also allows the other colors to really stick out as well.

The bright red title block serves the logo well.  Despite the rest of the poster's busy-ness, you can't miss what the show is called, even if you only get "Nice Work" from a distance.  (People in the biz refer to it as "Nice Work" anyway.)  Wisely, there is a separate font used for the title - a cartoonish, wavy-wiggly font that suggests nothing but fun and good fortune.  The thinner lines inside the bigger letters further help it to stick out and also to make it appear more vintage.

Vintage is a great word to describe the black, more dominant (in size as well as color - notice the white shadow behind each letter) font used for the last names.  The style fairly screams "1920's/30's!!!"  It also makes you  look more closely at the logo, to read the first names that go along with the last.  And as you know, looking closer makes you look at it longer.  Closer inspection makes you see the first names in a red almost calligraphy and a small, black almost cursive.  The names and the "jobs" should ring a bell for the target audience - generally an older crowd drawn in by the Gershwin name, and people my age who are Matthew Broderick fans, plus fans of "current Broadway" who might be drawn to Kelli O'Hara, Kathleen Marshall and Joe DePietro. 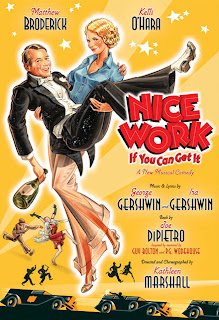 THE FULL POSTER AND IMAGES

While I think the poster isn't all that attractive, as in something to hang on my wall (maybe my kitchen; it makes my stomach growl), it is a master class in eye-catching and eye manipulation.  If the colors grab your attention, the fonts make you pay attention to the details.  After the names sink in, you pull back and really notice the images.

The chief image - Kelli holding Matthew - tells us a lot.  First and foremost, it is a cartoon likeness, not a photo.  The styling calls to mind those old roaring 20's/WWI/30's posters - Lucky Strike, Rosie the Riveter Chock Full O' Nuts, Coca Cola.  The picture captures their relationship perfectly.  They are smiling - they like each other!  She is holding him - he, not she, needs the rescuing (how "modern").  She's a working girl - note the pants and blue work shirt; he's a rich playboy with a drinking problem - note the disheveled tux and open champagne bottle.  And both have appeal - he's got the boyish charm thing working, while she has feminine wiles and sexiness working - notice her bust line and "see through" pants.

The next biggest image is the couple below the bottle.  It is a gangster chasing a flapper.  In one little image we get a subplot, a solid time period, and we know there will be dancing!  Ever see a flapper who didn't dance?  Or without a Gangster far behind lusting after her?  Then in further subplot, we have cops chasing party-goers in silhouette, suggesting that there will be mad cap mayhem and a close call with the law.  At the very bottom are three Gatsby era cars rolling out.  They certainly tell you that the show isn't a 21st century story, though it could imply a lavishness of production that simply isn't there.  No cars appear on stage at the Imperial.

And so we have a show poster and logo that really draw your eye to it, cause you to linger over it, and it tells the story and genre and 3 clear images.  As the title song goes, "Who could ask for anything more?"  As advertising, it is smart.  As artwork, for me at least, I find it somewhat unattractive - too bright, too busy.  It will do its job as ads go.  And at least I'll have a poster to hang near the even more ugly (and yellow) Tommy poster I have!

Grade: A+ as advertising; B- as artwork