DON'T FORGET TO NOMINATE YOUR FAVORITES OF THE PAST BROADWAY SEASON FOR THE 2ND ANNUAL JKTS AWARDS!
CLICK HERE TO COMPLETE THE FINAL BALLOT!
NOMINATIONS END MONDAY, MAY 28 AT 8PM!

This review is courtesy of my friend, editor and frequent guest blogger, Mike.

When he was writing Evita, the story of a young woman who achieved superstardom early and fizzled out just as quickly, Andrew Lloyd Webber took inspiration from Judy Garland, whose life had a similar trajectory. As a young man he had seen one of her last London concerts and witnessed the star stuttering her way through the songs that had made her famous. This spring, by sheer coincidence, the Broadway theatergoer can see biographical works about both of these women: it’s just a short walk from the Marquis, where the recent revival of Evita is playing, to the Belasco, where End of the Rainbow presents a slice of Judy Garland’s life that includes the very concert that ALW must have seen.

Peter Quilter’s script for this appropriately bleak play is economical if predictable. Aside from Garland herself, there are only two characters of any significance. Anthony, Garland’s British pianist and confidant, stands in for the legions of gay fans who helped make her famous and whose devotion would ensure that her fame would outlive her by many decades. He is ultimately pitted against Mickey, Garland’s last husband (her fiancé during the action of End of the Rainbow), a figure almost as tragic as the star herself. As the play starts, both Anthony and Mickey are committed to helping Judy stay away from drugs and alcohol, but while Anthony never wavers, Mickey – who has to live with Judy 24/7 – gradually morphs from protector to enabler. By the end of the story, weary from all of the suicide threats, expressions of entitlement, and diva moments, he’s willing to give her whatever she wants whenever she wants it.

Using these three characters, Quilter creates enough situations to keep you interested for a brisk two hours, but in the end (if I may adapt a line from Xanadu) it doesn’t add up to much more than an after-school special for 60-year-old gay people. There are very few surprises, and (as with Evita) we learn very little that we couldn’t glean from looking up the relevant Wikipedia article. The inclusion of musical numbers from Garland’s final London concerts is a definite asset, but it might have been helpful to include a scene from earlier in her career to illustrate how far she had fallen. And, while Quilter made the very effective choice of distilling the competing forces in Garland’s life into the characters of Anthony and Mickey, a few details seem off. For instance, why muddy the waters by making Mickey a casual homophobe? This may well reflect real life, for all I know, but it introduces tensions among the characters that only distract from the action of the play and add unneeded fat an otherwise lean script.

Director Terry Johnson, who won a Tony Award two years ago for his work on La Cage aux Folles, keeps things moving very quickly. Transitions between “book scenes” in Judy’s London hotel room (where the bulk of the play is set) and musical numbers in a London nightclub (Talk of the Town) are frequent and very smooth. While the star’s many fits and dramatic self-indulgences could easily turn the show into a campy spectacle, Johnson manages to keep things rooted in reality; these moments register appropriately as moments of pity and revulsion rather than humor. I am still a bit confused by the end of the first act, where the staging (more than the script) suggests that Mickey is leaving Judy for good, only to have him return after intermission as if nothing had happened. Otherwise, though, Johnson’s direction was clear and precise. 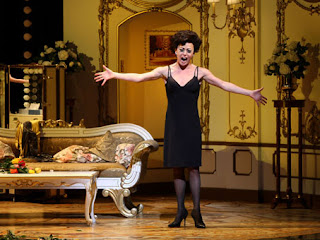 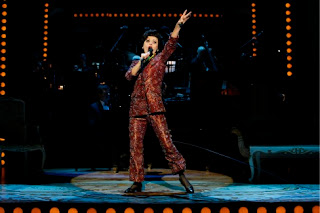 The production’s design elements are effective, mostly unobtrusive, and always very literal. William Dudley designed both the set and costumes in a consistent, if slightly drab, period style. The set is attractive and uncluttered; it was a nice touch to have ornamentation on the top surfaces of ceiling fixtures so those in the higher reaches of the Belasco would have nice things to look at. The cleverest aspect of the set is the rear wall, which has three “modes”: for most of the play, it is the opaque back wall of a brightly lit hotel room; occasionally it appears more transparent, allowing us to see musicians playing behind it; and for the nightclub scenes it lifts away entirely to reveal the band. These effects are, of course, assisted by the lighting design of Christopher Akerlind (Tony winner for Light in the Piazza), whose design contribution, for my money, was the most creative and effective. To him fell the task of making the big apartment set “disappear” during the nightclub scenes without actually having to remove it from stage, and the lighting does this masterfully. In a production like this one, with frequent transitions between settings, the lighting design is absolutely crucial to keeping things from getting too “clunky.” (Although I realize this is not relevant to the discussion of the design, I’ll note that there was a weird problem with lighting cues near the end of the first act, with several minutes of action in the hotel room lit only by a spotlight. Not a big deal, but I’ve never seen anything like that happen on Broadway before.) It seems odd to me that Gareth Owen’s sound design garnered the show’s only non-acting Tony nomination, since it did not seem all that effective to me. While the spoken scenes were crystal clear, the singing in the musical numbers was rather muddy. Maybe this was done on purpose to simulate conditions in a 1969 London nightclub, but I doubt it.

While it was a sensible decision to present this production as a play rather than a musical, the music here is almost as important as the dialog in portraying Judy Garland’s downfall. Musical director Jeffrey Saver, arranger Gareth Valentine, and orchestrator Chris Egan have done great work here, and the terrific band of five on-stage musicians are a reason to see the show all by themselves.

The cast of End of the Rainbow consists of four people, one of whom, Jay Russell, has just a minute or two of stage time as a BBC interviewer. Among the other actors, Tom Pelphrey (two-time Daytime Emmy winner for his portrayal of bad-boy Jonathan Randall in the late, great Guiding Light) does a fine job as Mickey, Judy Garland’s last fiancé. I had no trouble connecting with his character and with his poignant plight – a kind of spiritual downfall to accompany Garland’s physical downfall. Pelphrey’s portrayal establishes a well of audience good-will at the beginning of the play that allows us to sympathize rather than demonize later on, when his character does some things that are not so admirable. I do think the character, as written, allows for an even greater range of emotion than the actor exhibits in this production, but this still counts as a very solid Broadway debut for Pelphrey.

Michael Cumpsty, an actor with tons of Broadway and other New York credits, received a Tony nomination for his portrayal of Anthony, a gay pianist whose devotion to Judy survives many abuses and on-stage embarrassments. While I have no real complaints about Cumpsty’s performance, I think it is the character, rather than the actor, who earned the Tony nomination. I can think of a few other featured actors whose roles were more challenging and whose performances were at least as effective, but who failed to receive a nomination (including Tom Pelphrey, come to think of it). In short, Cumpsty excels in what looks like an easy part.

The real draw of this play, of course, is Tracie Bennett, whose portrayal of Judy Garland has attracted much attention (and the show’s third Tony nomination). In a season with no lack of committed actors giving harrowing performances in roles that look emotionally and physically exhausting, Tracie Bennett still manages to stand out. I don’t know if I would vote for her to win (you’ll see my Tony picks soon enough), but her nomination in a jam-packed category is richly deserved. What the performance lacks in range or subtlety – given the nature of the play, Bennett’s intensity level can only hover between 9 and 10 – it makes up for in precision. In bringing Judy Garland’s downfall to life on stage, Tracie Bennett not only has to sing, stutter, shout, and whimper, but she has to stumble, fall down, climb on pianos, and throw herself off of furniture, all without hurting herself or anyone else.  It looks effortless, but surely it took a lot of effort to get all of this exactly right, which she does. I am not too familiar with the life or work of Judy Garland, but many of those around me were, and they made it clear as they left the theater that Bennett had nailed it.


End of the Rainbow is far from the best play I’ve seen this season; if a non-Judy-fanatic asked me to recommend a new play, I can think of three or four that are currently running that are more broadly appealing, more emotionally satisfying, and certainly more thought-provoking. Tracie Bennett’s performance, however, makes this show well worth seeing.