It probably would come as no surprise that a Tony-winning regional theatre like Signature Theatre in Arlington, Virginia would do a play like God of Carnage, but it may be more of a surprise to some that the same company is concurrently producing Xanadu, a fun, super silly romp, and certainly nothing of the stature of say, a Sweeney Todd or Follies.  And it is happening just that way: mere feet apart from each other are arguing parents in a critically-acclaimed play and roller skating gods and goddesses under the twinkle of dozens of disco balls while singing pop hits of the 80's.  Maybe it is befitting of such an honored theatre company that they give as much attention to the fluffier pieces as they do the masterpieces.  The truth is, as much of a fan as I am of the original Broadway production (I saw it several times), I enjoyed this production even more. 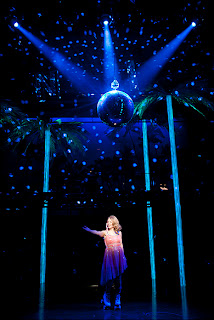 To begin with, the production values are first-rate, top-notch, and are a feast for the eyes and ears before the show even starts.  Misha Kachman's scenic design takes over most of the space, with the Venice Beach sign dangling over the large black lacquered floor and long exit ramps shooting off through the surrounding seating areas.  The upstage wall features a two level pier-like structure with a palm tree adorned backdrop colorfully lighting up the back.  The steel beams that hold up the platform simultaneously suggest a rock concert venue, as does the visible lighting, designed by Chris Lee - strip lights in a rainbow array, pin spots, and, of course, illuminated disco balls.  You just know by looking at it, that you can relax and get ready for some loud  fun music and some great visuals.  Still, all of that is somewhat expected for any version of Xanadu, but they go a step further: like the beams at Shakespeare's Globe Theater, four cheeky disco-styled palm trees act like they are holding the whole thing together - and here's the kicker - the trunks of the "trees" are tubes filled with glow-stick style lights, changing colors as the mood changes.  Throughout the performance, Lee's lighting is almost a character of its own, be it in the floor, overhead or in bursts of light beams raining down.  The consistently creative use of Kachman's set and all of that lighting really amps up the excitement of this production.  And the crystal clear (essential as the actors whiz around the theatre on foot and on skates) sound design by Matt Rowe contributes greatly to the rock concert feel of the show, especially during the songs when echoing and other very cool effects are applied to the vocals. 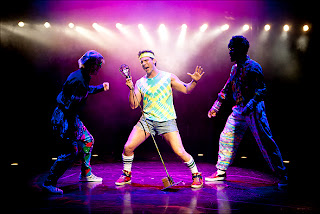 The nine member cast is uniformly fantastic.  As the "back up" muses, Mark Chandler, Jamie Eacker, Kellee Knighton Hough and Nickolas Vaughn are chameleon-like bursts of energy, each playing a variety of roles and also displaying a natural feeling of synchronicity as they frequently work in unison.  Mr. Chandler and Mr. Vaughn are terrific dancers (notably silly in "Dancin'"), while Ms. Eacker and Ms. Hough show off some pretty powerful pipes, particularly during "I'm Alive," "Don't Walk Away," and the riotous "Have You Never Been Mellow?" 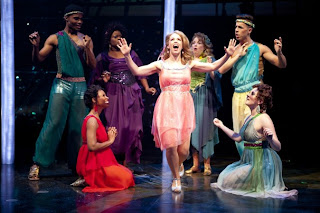 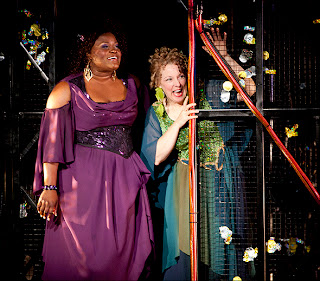 Taking great delight in their roles as villainesses of the piece are the diva-licious Nova Y. Payton and the sweetly devious comedienne Sherri L. Edelen.  According to the program, both are acclaimed actresses, each with long resumes of shows in the DC area, and it is easy to see why.  They are both by turn campy, over-the-top, and howlingly funny in their earnestness with the tasks at hand.  Their "Evil Woman" and "Strange Magic" are both highlights of the show.  As Danny, love-lorn sap and greedy real estate tycoon, Harry A. Winter nails both aspects of the character, adding some much needed depth and believability to a guy who needs to show a hard, no nonsense side and a romantic, goofy side, sometimes in the same scene.  His vocal styling fits the role perfectly, particularly in "Whenever You're Away From Me."  And his is a hoot as Zeus, here a Barbie doll carrying, pot smoking hard ass with a soft spot! 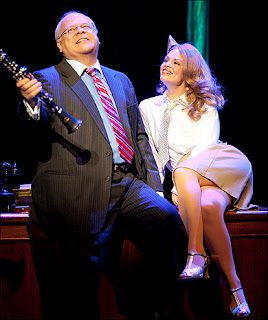 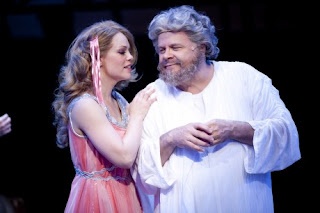 Any successful production of this show really depends on the strength of its two leads, and Signature hit the jackpot in this regard.  Charlie Brady is a perfect Sonny - dim-witted, but not stupid, sexy, but boy-next door, with a childlike sense of wonder and an "aw shucks" awkwardness in matters of the heart.  And can this man sing!  His rendition of "Don't Walk Away" is a dramatic power ballad, while his "All Over the World" is a gleeful romp.  But what really makes his work soar is the incredible chemistry he shares with his co-star, Erin Weaver.  When they sing together ("Suddenly" and "Suspended in Time") it is heavenly!  But Ms. Weaver owns this production.  She's a quadruple threat - sings like a pop diva, acts with that elusive "it" quality, dances with ease, and does much of her performance in roller skates with the ease and grace of Olympic gold medalist Dorothy Hamill.  And she is comic gold, with impeccable timing and a variety of accents used to full advantage.  Her versions of "Magic" and "Xanadu" are electrifying. 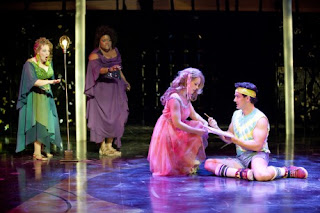 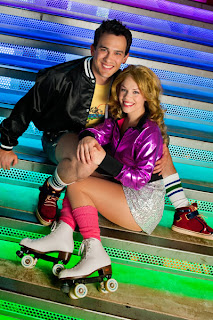 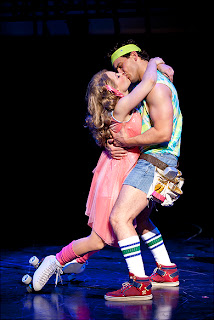 But the real star of this dynamic production is Matthew Gardiner, whose choreography and direction are thrilling, fun and all with a sense of unity that really keeps everything going on all cylinders without going off the road.  Much to his credit, the entire production has been re-thought, with hardly a trace of the original production.  He has found all of the given laughs and handled them well.  But he has also found many original places for laughs and visual gags, making this production just that much better.  From the little things, like Zeus carrying a "Clio" Barbie doll to the extremely clever way he handles the need for his leading lady to float across the sky on Pegasus.  Less is more and ten times more clever in this instance (I'm not giving it away, but it is a doozy!).  His energetic choreography is relentless in its athleticism and full of the kind of details one usually associates with Fosse or Tune and the smart, witty genius of Stroman.

The hallmark of Gardiner's direction is the fact that while there is no short supply of camp and ridiculousness, the entire show from start to finish has an undercurrent of humanity and sincerity that makes the whole show have a surprising emotional heft.  The laughs are that much heartier, the feelings that much deeper.  Still, this isn't Les Miserables or even My Fair Lady.  Thankfully, Gardiner and company never forget that.  This Xanadu may have the most human gods, goddesses and mortals, but they are as silly and fun as ever.

Xanadu plays at Signature Theatre through July 1.  Go to www.signature-theatre.org for details and ticket information.