REVIEW: Twelfe Night or What You Will

These days you can go to Chicago to see masterful choreography, done "in the style of Bob Fosse." And you can see the Harlem Renaissance  - Langston Hughes, Duke Ellington, et al - done in the style of those old Cotton Club revues at After Midnight.  But as far as really going old school, you have to see Twelfe Night, or What You Will currently at the Belasco Theatre, which is the closest approximation of the "style of William Shakespeare" Broadway is likely to see in some time.  The much touted, critically acclaimed production is that rarest of shows: it actually exceeds its own hype.

I won't bore you with a synopsis of this comedy, but suffice it to say it is chock full of mistaken identity, high brow and low brow jokes (including one hell of a joke about lady parts), physical comedy and pageantry to satisfy any theater lover's need to revisit some of the greatest writing and classic staging for the foreseeable future.  What you have read is true: you shouldn't miss the pre-show ritual of watching the actors get their make-up applied and marvel as they are literally sewn into their costumes.  And, while necessity dictates that some electric lights be used, it is also true that the show is primarily lit by more than 100 candles hanging from six chandeliers and an upstage group of candles.  Staged with a minimal amount of props and scenery, it is really up to the script and the actors to help fill in the blanks left for an audience brought up on literal spectacle. It is, indeed, fascinating to watch an all-male cast maneuver through some of the Bard's more complicated relationships and bring visuals to life with words.  What was a necessity by law back in the day, now could come across as a marketing tool and casting gimmick.  But aside from perhaps a little extra in the nervous titters/giggling department of the modern audience when two lovers share a passionate kiss, the acting is so top notch that you literally forget that there is more under the ladies' corsets that would actually be.


All of the design elements are credited to Jenny Tiramani, including the regal, plainly appointed unit set that allows for double entrances and exits, as well as universes full of possible locales, and two tiers of onstage seating on three sides - the upstage area for the authentic Elizabethan musical instruments played by an excellent troupe of musicians.  That scenery is impressive on its own, but the costumes - the authenticity and the mind-boggling details of each garment from the undergarments to the most outer layer - are in a class by themselves.  Each and every one a masterpiece, they instantly reveal character and frequently add to the comedy at any surprising moment.  If she is overlooked come awards season it would be a true tragedy.

What is perhaps the biggest (of many) achievement of Tim Carroll's direction is that despite many real opportunities to chew the scenery by any number of the actors, he has grounded this comedy in the reality of the situation and the brilliance of the words.  Instead of over-the-top zaniness, which would have allowed for easier laughs, he trusts in the script and the humanity of the characters, and allows the charms of both to shine.  The result: a steady roll of laughs, capped by allowing us to also genuinely care about these characters, and even more wonderfully, we can relate to them.  He keeps the pace brisk, with just enough ebb and flow to let us breathe in between belly laughs.  He has even staged the curtain call as a riotous production number - a lovely cherry on top of a delectable sundae. At just under three hours, the time still feels so brief.

All of that said, this production would be just as effective read from stools with each actor dressed in black from head to toe, given the supreme talent of the Shakespeare's Globe acting company.  Let's be honest, there is nothing like British actors, trained in the very place where Shakespeare first created his theater magic.  And there is not one weak link in the entire company.

Mark Rylance may be the name draw here, and he is marvelous, but there is a reason he is listed alphabetically with the rest of the cast.  The show is acted by a true company of actors, each an equally important cog in the giant wheel of the show.  Even the smallest roles have impact.  Of the supporting cast, there are several actors who stand out, including Angus Wright as the clueless dope Sir Andrew Aguecheek, Peter Hamilton Dyer as Feste, the wise fool, and Liam Brennan as the arrogant rogue Orsino.  An amazing doppelganger for his onstage "twin," Joseph Timms makes the very most of his all too brief stage time, and Colin Hurley is the most convincing drunk Sir Toby Belch I've ever seen. 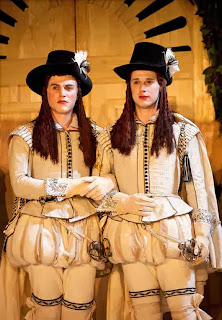 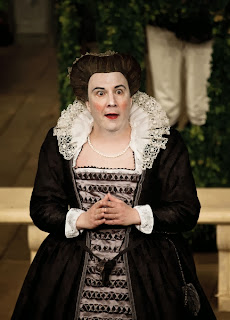 
But the quartet of actors at the center of all the mayhem are sublime. Paul Chahidi is a marvel as the robust and earthy Maria, lady in waiting to Olivia, and partner-in-crime to all of the machinations of the plot that keep things chaotic.  His "feminine wiles" are hilarious!  Stephen Fry has the chance to flex both his dramatic and comedic muscles as the lovelorn Malvolio, personal assistant to Olivia, and he is equally adept at both.  Whenever he is onstage, the energy goes up a notch just from his presence.  Samuel Barnett, who has also been seen on Broadway (and film) in The History Boys, gets to show off some seriously complex skills, what with having to be an man, playing a woman, playing a man - a mourning, then in love, then courageous man.  Among his many skills, Barnett gets to show off a terrific set of fencing skills, and he's not a bad dancer, either.  But the biggest attraction here is the overall sensitivity and genuineness with which he plays Viola playing Caesario.  And of course, there is the marquee name, Mark Rylance, who does indeed give a tour-de-force performance as Olivia, a hot mess of emotions - mourning one minute, hot for love the next.  The role gives Rylance the chance to have several applause-inspiring moments to be sure.  Just watching him sort of float across the stage is a constant source of guffaws.  But the real wonder of his performance is that he's a real team player, foregoing several obvious chances to steal the show.  Instead, he lets the show and his co-stars reveal the fun of playing Olivia.  It is clear that he is having a ball playing the role, and just as clear that he is totally at home without scenery chewing.

I will close by saying that we sat onstage on the upstairs, upstage benches, and the view was spectacular.  we could see 99.95% of the action, and hear every single word and note.  The moments where the cast played directly to us were especially nice, and it was also fun to watch the comings and goings of the backstage area, as well as to see the show from the same vantage as the musicians.  It was a delightful, singular experience at a very singular theatre event.