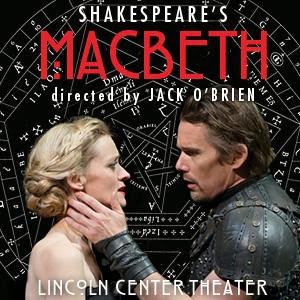 Boy, there sure has been a lot of Shakespeare to choose from this season!  The latest entry in this Bard-a-thon is the Lincoln Center production of Macbeth.  And this one has a lot going for it: the star-power of acclaimed stage and screen actor Ethan Hawke, supported by several Tony nominees,winners and stage favorites, including no less than Richard Easton, Malcolm Gets, John Glover, Brian d'Arcy James, Daniel Sunjata, Byron Jennings and Jonny Orsini.  One of the darkest tragedies of all time, this Macbeth is helmed by legendary director Jack O'Brien.  Now, I am so excited to be able to bring you the chance to win tickets!  Be sure to follow all of the directions, and enter to win by NOON on Sunday, November 24!

In a production drenched in black, and glinting with blood red and dazzling white, MACBETH reveals itself to be Shakespeare's most powerful and darkest nightmare; a terrifying parable for our own time in which we, too, are urged to take more and more chances, whatever the consequences. Shakespeare has the answer: MACBETH is the consequence. We must beware!

1.  TRUE or FALSE: Macbeth is the only Shakespeare work that has been presented on Broadway as a play, a one-man show, and a musical.

2.  Director Jack O'Brien has helmed Broadway productions of all of the following EXCEPT:
A. Henry IV
B. Hamlet
C. Twelfth Night
D. Two Shakespearean Actors