So, yesterday came with the announcement that two new Broadway shows were closing.  One of them, A Time to Kill, I really wanted to see, despite the mixed-to-negative reviews it received.  The other, First Date, I did, thankfully, get to see.  Neither closing really comes a surprise.

Given the public-a-large's penchant for tried and true titles, you would think A Time to Kill, would have lasted longer.  Of course, the title alone isn't enough to get butts in the seats.  Maybe it needed more star power - you can rent the movie for $2.99 or buy it for $6.99 on Amazon.com and get the likes of Matthew McConaughey, Kevin Spacey, Samuel L. Jackson and Sandra Bullock.  Even at 1/2 price, the cheapest seat would be $34.75, and you'd get a pretty distant view of Sebastian Arcelus, Patrick Page, John Douglas Thompson, and Ashley Williams, moderately famous for their stage and screen efforts, but not an Oscar nominee, winner or Hollywood heartthrob among them.  Yes, deeper in the cast are Tony-winner Tonya Pinkins and Emmy nominees Fred Dalton Thompson and Tom Skerritt.  Still, not a "must-see" on the list as far as the general public (read tourists) is concerned.

Then, too, is the idea that Broadway thrillers are a thing of the past.  Films can do it more graphically, with exciting cross cuts, multiple locations and special effects.  TV procedurals and court room dramas (the entire CSI and Law and Order ouvre) have taken a large bite out of the "shock and awe" of the controversial, socially important crime and punishment drama.  I'm thinking, despite the popularity of the novel, its author and the film of the same name, A Time to Kill would have REALLY needed to be something special - star-studded, visually unique, and doling out dramatic theater that can't be replicated on film.  A tall order.

The trial is over November 17. 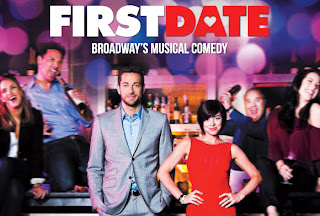 You have longer to get to see First Date, which will call it quits after the holidays, on January 5th.  I can't say I'm too surprised that this one is closing so soon, either.  But it is a little surprising in a couple of ways.  First, until this week's opening of After Midnight, only Janis Joplin got slightly better reviews (StageGrade.com says it got a median review grade of B-; the bigger, more hyped Bug Fish got the same).  It is also the show I've liked best so far this season as well (my review HERE).

But there is so much going against this show, too.  First, with money still tight for most people, especially tourists, you get considerably less bang for your buck, even at a discount or buying the cheap seats.  The show is 90 minutes, not very splashy, scenery-wise, and by a bunch of unknowns.  Not exactly a great alternative to those unable to get tickets to The Book of Mormon.  Second, despite two moderately well-known TV stars above the title, you'd have a better shot at seeing someone famous in Chicago, After Midnight or decent replicas in A Night with Janis Joplin, Jersey Boys or Motown.

Still, First Date fits the bill of exactly the kind of show that avid Broadway aficionados always lament is missing: a new show, not based on anything but a decent idea, but new, up-and-coming writers.  The problem is that lately all of the best musicals that fit that exact bill are happening off-Broadway - The Great Comet, Here Lies Love, Fun Home.  And so many similar shows have made the transfer to Broadway and failed miserably - Lysistrata Jones, Grey Gardens, Bloody Bloody Andrew Jackson to name a few - making producers jittery at best to take the leap.  Don't get me wrong, First Date isn't the artistic, envelope-pusher of any of those other titles, but it doesn't try to be, either.  In a lot of ways, it is a throwback to Broadway shows of old - fun romps with a New York edge, that provide an escape from the every day humdrum life.

Too slight? Probably.  Too New York for tourists? Maybe.  Too many "sure thing" shows for your limited budget? Definitely.  That said, I'd still say to those of you who haven't seen it, go see it.  It is fun. And people are going to say they saw Zachary Levi's Broadway debut, one that'll be talked about for awhile, I'm thinking.  So why not actually see him than just say you saw him?  He is really that good.
Posted by JK at 8:00 AM