Talk about late to the party!  I finally got my hands on a copy of the cast recording for the Broadway revival of Godspell at this year's flea market.  I guess I just never got around to making the purchase; at least this way I got it for a bargain and for a good cause at the same time.  And I'm glad I finally got it. 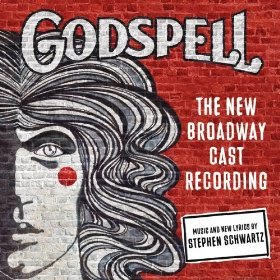 
THE BIGGEST DRAWBACKS TO THE RECORDING

Godspell is really a visual show: Like Stephen Schwartz's other show early in his career, Pippin, this show really depends upon the visual aesthetic and concept of the given production.  Perhaps even more so here, with its series of scenes and more vague, conceptual story line (not to give Jesus' last days the short shrift), Godspell is a series of little shows.  And this production really, really was a visual one - each number was a showcase of creativity, theatricality and the individual performers in the cast.  Unfortunately, the recording, without the visual, really points up the relative weakness of the score. 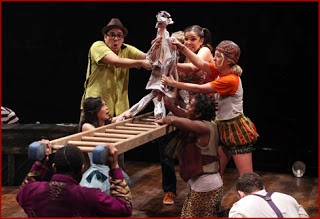 The updates to the score: Don't get me wrong, there is a lot to love about the score to Godspell.  There is something endearing about its simplicity, and a few numbers are very catchy, while others are very touching.  But part of the charm of it is that it shows us a young composer on the verge of really big things, and that it is such a product of its time.  The updates to the score - and there are soooo many - take away that 70's vibe from the tunes.  They are so overly produced that it takes away from the innocence and love with which this story is being told (it is a sweeter, much gentler Jesus Christ Superstar).

Recording is a keepsake of the production: Ghostlight Records really did a nice job packaging this cast recording.  The booklet has two great essays from original band leader Paul Shaffer and from composer/recording producer Stephen Schwartz.  And the complete lyrics are accompanied by dozens of full color production photos, many not found online.  If you didn't by the souvenir program, this booklet will more than suffice.  And like its new brother, the new cast recording of Pippin, with its fan sing-along, this booklet also includes a bit of Broadway history:  there is a complete list of  The People of Godspell, the first-ever fan-based funding of a Broadway show.  Is your name on that list? 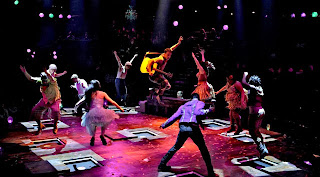 The updates to the score: I know what you are thinking: how can this be a drawback AND a good thing?  Well, updating the score does add a modern vibrancy and relevancy to this old chestnut.  And it really does add to the pastiche score, making each number even more a separate endeavor.  You can enjoy each number all by itself.  And, as I said above, there is still some simplicity here ("Day by Day"), some very catchy numbers ("All for the Best," "Turn Back, O Man"), and touching ("On the Willows," "Beautiful City").  This recording also preserves the inclusion of "Beautiful City," a  song from the film, as well as complete recording of "Tower of Babble." 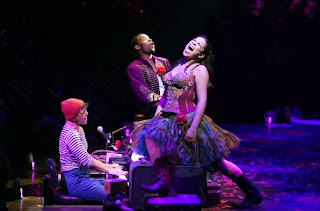 The cast: I have a feeling that this cast recording, like those of RENT and the revival of You're a Good Man, Charlie Brown (to name but two), preserves a group of super talented young performers on the verge of huge careers.  Look at Lindsay Mendez, clearly the first breakout star from Godspell, who has since gone on to starring roles in Dogfight and Wicked.  Others who stand out as up and comers (to me, anyway) include Nick Blaemire (Dogfight), George Salazar (F#%king Up Everything, Here Lies Love),  Morgan James (Motown: The Musical, 54 Below), and Telly Leung (Broadway-bound in Allegiance).  And I'm sure we haven't heard the last of Hunter Parrish, Wallace Smith or Celisse Henderson.