REVIEW: A Gentleman's Guide to Love and Murder

Broadway's newest musical, which opened Sunday, has everything in it that I love: a strong visual aesthetic, a tight, concept-driven staging, a smart, intelligent book, and songs that match not only the era of the show, but also add to the entire production.  With an exceptionally versatile cast, razor-sharp direction and a handsome production by any standards, as well as one of the wittiest original books and scores in some time, A Gentleman's Guide to Love and Murder, you'd think that I'd have been chomping at the bit to spread the word on my "latest favorite show."  Unfortunately, my ultimate impression is one of appreciation and enjoyment, and not that hard-to-explain feeling of musical theater ecstasy that I think I should have been feeling.  Indeed, as I write this - and you may read it - I wonder if my grade should be higher than it is. Or maybe lower.

Let me first get a few possible influences on my feelings out of the way: I have never read the book, nor have I seen the film, upon which the show is based.  Even if I had, though, I am certain I would still be praising the production's embrace of all things theatrical.  And while this show, on paper at least, calls to mind several others, I'd have to say that it only bears a similarity to anything else as much as any murder mystery resembles any other murder mystery, as much as any comic operetta resembles any other comic operetta.  And I'd point out that a few times, the very clever book and score purposefully gives a nod to a number of entertainments.  (Their sly nods to Aida and Sweeney Todd will please musical fans!)  In short, while there are any number of ways one might discuss how the show like others, that would be wholly unfair, as the entire production has the heady appeal of something new and almost arrogantly clever.  In retrospect, it may just be that unrelenting cleverness that is the musical's downfall, keeping it in that pile of titles that I really enjoy, and out of the pile of shows that thrill me enough to want to see the very next performance.  Lovers of musicals know the difference and why it is a B+ show, not an A.

I'm sure it is partly out of necessity (real or perceived) that writers Robert L. Freedman and Steven Lutvak, made the book and lyrics so dense with detail.  Teachers of musical theatre may very well use this show as an example of how to integrate period and style with character and plot.  To call this endeavor "tight" and "fat-free" is both a supreme complement and a frustrating criticism.  If you follow my reviews at all, you know how much I admire writers who use every scene, line and lyric to further the plot and develop characters while still managing to be entertaining.  And Freedman and Lutvak, though Broadway novices, are two names we all need to keep an eye out for in the future.  They know what they are doing, for sure. They could have easily taken many short cuts, but were smart enough to know that, for example, in high comedy it would be really easy to just crank out genre-friendly character stereotypes.  Here, they embrace those stereotypes then take them to the next level with surprising plot twists and riotous character tics.  The main thrust of the story is that in order to stake his claim at the family fortune, Monty Navarro needs to outlive eight heirs, all of whom are upper-crust British dandies.  Between them we see the pomposity of old money, the arrogance of power, the artsy-fartsy, the family outcast, and variations on those themes.  Nothing new, right?  They owe a debt to Shakespeare, Dickens and Christie for sure.  But the fun is in the amping up of these types.

Happily, their skills extend into the songs.  In the mode of Gilbert and Sullivan, the score is full of patter songs, over-the-top diva duets, and charming ballads.  Among my favorites are the numbers that open each act ("A Warning to the Audience" and "Why Are All the D'Ysquiths Dying?"), clever, hilarious and extremely catchy ditties that set the tone at the start, and get us immediately back into things after intermission.  The audience howled with laughter at the double-entendre filled number "Better with a Man," a duet that manages to be period and very 21st century at the same time (the last line is a hoot!).  And the staging that goes along with the dynamic trio "I've Decided to Marry You" is the epitome of everything the show is trying to be. 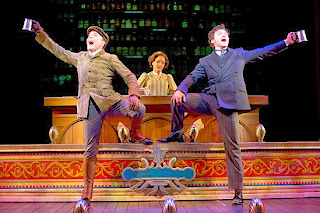 The entire creative team is completely in sync and as unrelenting as the show's authors.  Linda Cho's stunning costumes - with a big shout out to her cavalcade of hats - are beautiful and wonderfully character-driven, a few chuckle-worthy all by themselves.  Alexander Dodge's crafty stage-within-a-stage design holds as many surprises as the plot and is fun to look at throughout.  Supplementing the stage design is Aaron Rhyne's most excellent use of projections - as clever as the show, but never overpowering (we come a long way since Wonderland).  The moody and bright lighting design of Philip S. Rosenberg adds to the proceedings in each scene, and Dan Moses Schreier's sound design allows every fast-paced syllable in every scene and song to be heard clearly, and the creepy sound effects are great, too.  Peggy Hickey's choreography matches the wit and whimsy throughout - feeling both very of the period and of today at the same time.  I would be remiss, though, at not heaping praise on director Darko Tresnjak, who is making an auspicious Broadway debut.  He wrings every possible laugh out of the book and stages the physical comedy with an impressive style and pace.  My only real criticism is that he couldn't figure out (along with the writers) how to find places to slow things down just a smidge to allow us to breathe, take stock and then rejoin the fray.

Among the strongest assets of this new musical is its amazing cast.  The six ensemble members have to be among the season's most busy and versatile - each plays several unique characters, all while singing and dancing in a wide variety of styles.  Joanna Glushak is a scene-stealing standout as the, um, disgruntled wife of a pompous windbag of a Lord. 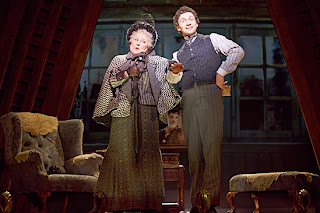 Each of the five principals are terrific, too, with the charming Jane Carr as the narrator/framing device, who pops in and out of the story at the most opportune times, getting the ball started with her witty opening number, "You're a D'Ysquith."  She made me think of what Mary Poppins would be like if her charges were naughty adults.

The two ladies at the center of a love triangle are an embarrassment of riches.  Lisa O'Hare is a force to be reckoned with as the sultry coquette Sibella, a woman who wants to have her cake and eat it, too.  Lauren Worsham plays the not-quite-naive heroine Phoebe, to the hilt.  While the lion's share of opportunities come to Ms. O'Hare, Ms. Worsham still makes quite an impression individually.  But it is when they work together that their scenes really take off (particularly "I've Decided to Marry You").  And how their characters turn out in the finale is a shock and fun final twist of the evening.  Watch carefully! 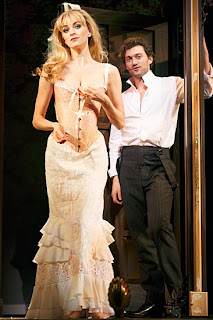 This show rests mostly on the shoulders of its two male leads, and the show's producers have hit the jackpot with these two.  Whatever they are paying the beguiling Bryce Pinkham and the chameleon-like Jefferson Mays is not nearly enough.  WOW!  I pity the Tony committee here, as both deserve nominations, if not the award itself.  Pinkham never leaves the stage as he both guides us through his story and participates in dozens of fully unique scenes.  He is deft at not only singing and dancing as any Broadway leading man would be, but he is very adept at physical comedy, word play, sword play, swinging any number of weaponry, and perhaps most significantly, he holds his own as the often straight man to the broad comedy, all against his very showy co-star.  Lovers of Ponty in How to Succeed... will really enjoy Broadway's newest anti-hero's climb to the top of the heap.

Mr. Mays has, and will, I'm sure, get a lot of recognition for his playing eight completely different roles, often seconds after each other (with jaw-dropping costume change speed to boot).  His performances are unique in their quirks; his broad strokes still so specific that you know instantly that you are seeing a completely different character.  Two such characters really stood out for me.  First, there is the supercilious "Lord Aldabert," whose arrogance is so funny, the only thing funnier is that his apparently fearlessness of death makes his actual demise a true gut-buster!  And there is the world traveler of the family, "Lady Hyacinth" a refreshing drag role that isn't a dull retread like in recent seasons.  Mays is amazing in the huge production number "Lady Hyacinth Abroad." 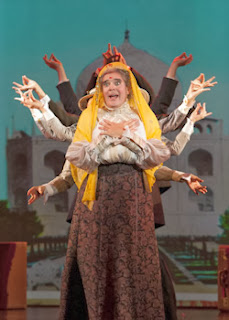 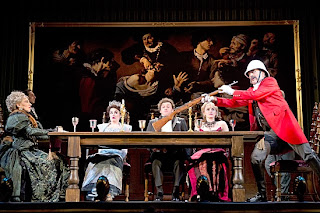 So what is missing?  For all of the book and score economy and high brow, low brow and physical comedy, and the speed with which the proceeding fly by, I thought I'd laugh heartily more often, when I actually mostly chuckled to myself.  And when it became apparent that I'd have to pay equally close attention to all of the dozen or more characters beyond the broad strokes, I fear I missed some of the fun - a forest for the trees situation.  Giving us a moment or two to breathe in each act would probably have helped to turn this very pleasant diversion into a real gem of a complete vacation from reality.