No Expectations... (Some) Great Experiences 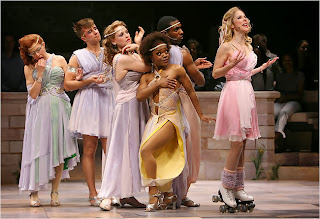 Many of us have had the downer experience of getting really excited about seeing a show only to be disappointed in it.  Those are never fun, right?  But how about those shows that we go into with almost no or - worse yet - low expectations?  Sure, some of those show meet those low standards.  At least they give us some great "we were there" stories!

It has been my experience, though, that more often than not, those shows are the ones I end up enjoying the most.

Say Goodnight Gracie? George Burns?  Yawn.  One man shows?  Double yawn.  Got a comp to the National Tour with the late Frank Gorshin, and LOVED it.  I laughed.  I cried.  Good times.

Hair. Not a big fan of the whole hippies-60's thing.  Like maybe two songs in it.  No Jonathan Groff? Went because I try to see all the new musicals and revivals each season.  Got a cheap front row seat, Will Swensen stood on my chair and wiggled his crotch in my face, and I saw Jay Armstrong Johnson for the very first time.  I loved it so much I called Mike from the street the second I got out! (He ended up being a real Hair groupie!) 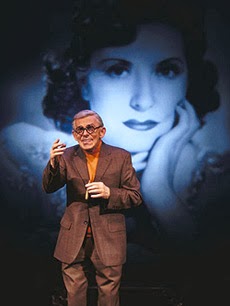 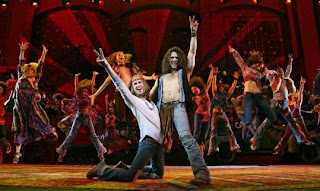 Speaking of Mike, we both went to Xanadu specifically to see what a train wreck it would be.  The place was on FIRE!  The cast, the band, the audience.  I haven't laughed as hard since.  Saw it 5 or 6 times...  Then there is our much chronicled love affair with American Idiot.  (This blog is full of info on that topic!)

Some current shows that fit include Cinderella (I will see anything with Laura Osnes, but I never expected to be so transported... and Santino Fontana? Grrrr!), After Midnight (Not a huge Fantasia fan, and I'm not too big on musical revues.), First Date (Saw it, liked it way more than I thought I would.  I am now a Zachary Levi fan for life.), Matilda (Had read the book years ago... "kids shows" are an iffy proposition... LOVED it!  One of the best shows in many seasons!), and A Night with Janis Joplin (See my notes on Hair...).

But my three biggest unexpected thrills in years are: 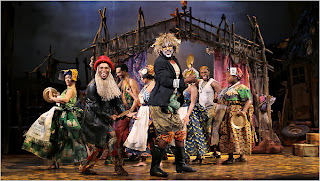 3.  The Book of Mormon:  I saw it shortly after it opened, before the hype machine was in full gear, and at a discount, no less!  I had seen exactly one episode of South Park  at that point, I think.  And I went just to see it as part of my see-every-new-musical thing, and mostly because Mike was so excited about it - though we both were fully prepared for a flop.  Well, the rest is history.  People pay a couple hundred bucks to sit where I did, you can't get tickets for months in advance, and it is a cultural phenomenon.  And I can't wait to see it again! 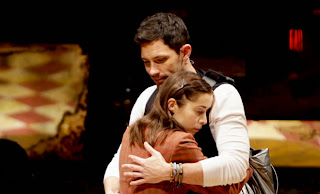 2.  Once: Never saw the movie.  Never heard of Cristin Milioti, only knew a little about Steve Kazee.  And European pub music? Not so much.  I fell in love with Kazee and Milioti the minute they locked eyes in two spotlights.  I laughed, I wept.  My soul ached when it was over.  Loved it even more the second time. 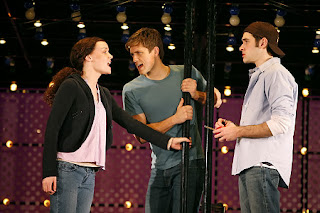 1.  next to normal: I have written many a blog about my love for this modern masterpiece, so I won't bore you again.  But talk about low expectations!  The only reason I went was because I love Alice Ripley, but really?  A show about bipolar disorder?  And I hated Jersey Boys, so I didn't want to see J. Robert Spencer, and was miffed that Brian d'Arcy James left it to do Shrek.  Well, I was in awe - literally, I sat with my mouth open for the whole show.  It was one of those life-changing moments.  And now I'm a fan of Tom Kitt and Brian Yorkey, not to mention my crushes on Jennifer Damiano, Aaron Tveit and Adam Chanler-Berat!

Hmmm... do I need to keep my expectations in check for the upcoming Kitt/Yorkey show, If/Then?

Write in (or Tweet me) with your unexpected favorites!

Labels: expectations, next to normal, Once, The Book of Mormon, Xanadu