How to Market a Show: On The Town 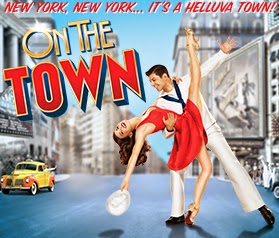 These days for a new Broadway show to be heard above the din of Times Square, the buzz and squawking of social media, and the one-upsmanship (for the good and bad) of critical notices and pull quotes.  We've all seen the epic fails - decent shows fall victim to poor marketing - the original The Bridges of Madison County comes to mind.  Mediocre shows survive with a great campaign - sorry Rock of Ages fans, but it is true.  And of course there are the campaigns that have become iconic - penguins in Antarctica recognize the Phantom mask, I'm sure.

Where the campaign (and the show itself) for On the Town will finally end up remains to be seen. BUT, and it is a big one, so far, their efforts are exemplary.

They have the basics down:
For the tech-savvy/younger audience:

And for the more mature audience/off the media grid set, there's already a preview commercial that explodes with Leonard Bernstein's famous "New York, New York" while the New York Times quotes from the pre-Broadway Barrington Stage run on the screen.  (I'll talk more about the commercials and the very cool logo in another blog later this summer!)

But the people in charge of getting this show "out there" to create awareness and buzz have really done a nice job so far, too, I think, especially considering that the competition for dollars will be stiff, and, perhaps that a show that will celebrate its 70th anniversary on December 28th!  New Yorkers and tourists must be courted, and boy, have they done that!

How about a photo-op at the National Hot Dog Eating Contest on Coney Island? 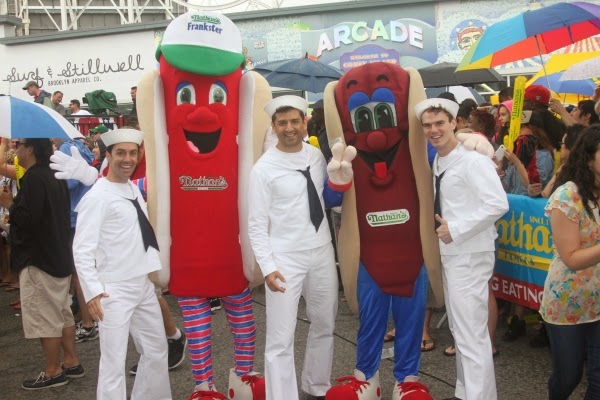 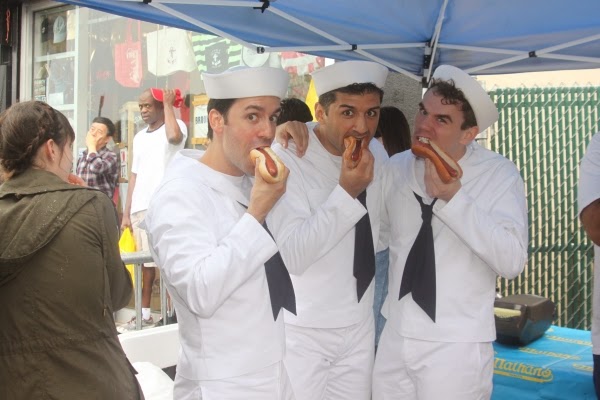 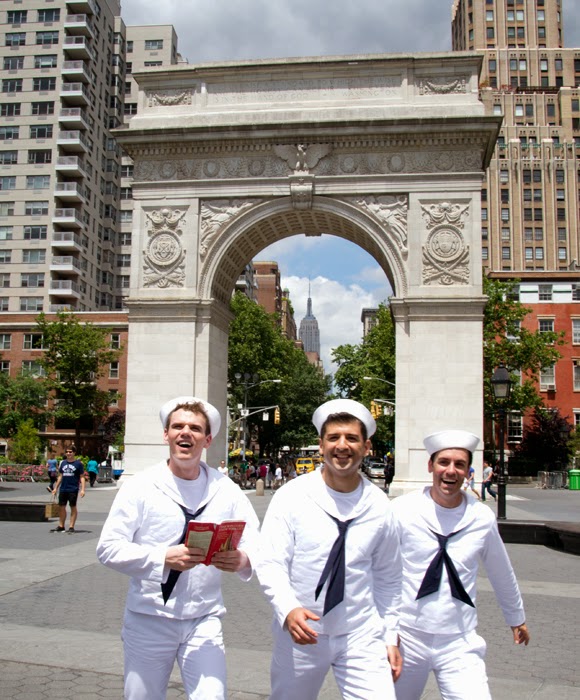 How about a short film featuring the three main cast members singing and dancing around all of the treasured spots of native New Yorkers - Coney Island, the New York Public Library - AND hitting all the tourist spots - The Statue of Liberty, Macy's, museums, and more.  They interact with people who live here AND with the tourists (I love the expressions on the faces of the people on the tour bus!)  In short, they are appealing to both key groups that will fill the seats.  And, let's face it, they make coming to the Big Apple look like a safe, fun adventure.  Best of all, If you know they show, there are nods to the story AND Jay Armstrong Johnson, Tony Yazbeck and Clyde Alves act completely in character - 1940's character!  That the two eras come together so easily and pleasingly speaks well for how much this classic still works today.  I hope the show itself has the same appeal.

Then there is the genius cross-pollination of stage and TV, by offering one of today's biggest prizes for the common folk - the parlaying of a reality show appearance into a career.  Many dance fans are also theatre fans, right?  So why not give the winner of the Emmy-winning So You Think You Can Dance this season a spot in a Broadway show!?  And even better, why not make the very last time the 20 contenders will dance together - a bittersweet thing - be the big opening number from the show that'll be the prize, choreographed by the guy who'll do the same on Broadway!?  A not so shameless plug, with further advertising potential for several weeks leading up to the first preview!  BRILLIANT!


Keep it up, On the Town!  I'm even more excited to see your show.