I've been a fan of Side Show since I first heard the eerie opening notes of "Come Look at the Freaks" in the fall of 1997.  It has remained among my favorite shows since then, and so I had to see the revival which is now entering its final week at DC's Kennedy Center.  I'll admit that, in addition to being very excited to revisit the show in a full professional production, I was also a little nervous.  Its creators - Bill Russell (book and lyrics), Henry Krieger (music) - have done a well-reported overhaul on the script, excising songs, changing existing ones, and adding several more.  Would I still love the show after such a transformation?

Yes.  As much as the original.

Much has already been written about the scope and nature of the evolution of the show from the Broadway production to its current state.  For the most part, these changes are ultimately for the best, focusing on the story of the Hilton Sisters in a more literal way than the more stylized, conceptual way.  Not to worry that this is yet another bio-musical in the "Behind the Music" vein; this show digs somewhat deeper.  Added to the story is background of the twins that led them to the side show.  Told as a flashback sequence, it mostly works, though I might suggest positioning it differently, for higher impact.  Maybe as a prologue leading to the fantastic and much more detailed and exciting opening number, "Come Look at the Freaks."  Still, even as it is, it adds to our understanding of what makes these girls tick, from abandonment to cruel upbringing, as well as a much deeper look at the owner of the side show, here called "Sir." The weak link of this addition is the inclusion of Harry Houdini (understudy Guy Lockard - in over his head), who offers a potentially interesting mystical element which is summarily dropped from the moment it hits the stage.  A missed opportunity, perhaps, but easily excised, along with the weak song he sings.  Other than that, the new songs are pretty terrific (Harold Wheeler's orchestrations are thrilling and Sam Davis' musical direction and arrangements are top notch), with "Typical Girls Next Door" and the cheekily titled "Very Well Connected" as standouts.  Other songs have been completely overhauled - "1+1=3" is a new tune altogether, and the tune from "Tunnel of Love" is used in the new "Coming Apart at the Seams," which matches the new book very well, though I miss the original song.  With decidedly more dialogue - at least in density - it is interesting to see what parts are still sung dialogue.  One wonders if this might work as a sung through piece (or without any sung dialogue).

Staging-wise, the show is in pretty great shape, too, with director Bill Condon's film expertise translating well to the theatre.  He uses a variety of tricks to create a smooth, cinematic flow, punctuated with well-placed blackouts.  He also has created some breathtaking stage pictures, including the stunning opening scene and final tableau which feature the film which ended the Hilton sisters' career, Freaks.  Then, too, there are the touching reappearances of the attractions, serving as a constant reminder to both the twins and the audience that we are inextricably attached to our past, and, more importantly, that all of us are unusual, different... unsure.  During "Coming Apart at the Seams," fans may notice there is a nice nod to the original artwork for the show - it looks just like the window card!It is also to Condon's credit that the twins are more integrated into the staging - at one point they even gallop, fully attached, around the huge stage - instead of having everyone come to them as in the original production. Finally, the pacing never flags.  The show flies by, and ebbs and flows easily and with purpose.  Where the staging falters is with most of Anthony Van Laast's choreography, which is serviceable but not really that exciting.  Don't get me wrong, the vaudeville numbers work -  let's face it, you can't help but stare at the twins.  But it would be even better to frame them with some inspired chorus work, making the numbers stand out separately and as a part of the overall fabric of the piece.

Technically, this production works on all levels - Broadway must surely be on the minds of the company.  David Rockwell's scenery is eye-popping, with lots of stylized pieces - everything looks ripped apart suggesting that the other half is missing (talk among yourselves about what that could mean), and despite its size, it all moves easily, lending itself to the cinematic staging.  Similarly, Jules Fisher and Peggy Eisenhauer's lighting is theatrical and eerie, movie-like.  They are experienced pros and it really shows; the lighting is Tony worthy.  The design highlight, though, is the truly amazing special make-up effects, designed by Dave and Lou Elsey.  The Geek, the Venus di Milo and the Human Pin Cushion were particularly astonishing up close.  If there is a misstep, it could be with Kai Harada's sound design, which suffered in competition with the excellent orchestra.  That, however, may be more to do with the theatre than the design itself. 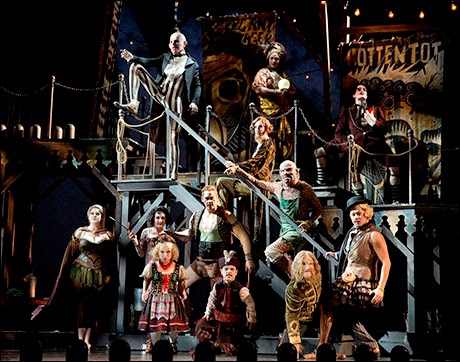 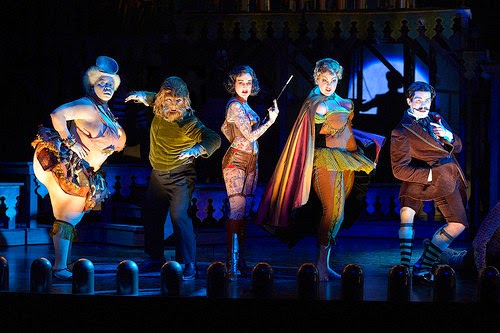 The fourteen member ensemble is uniformly excellent.  They work hard and smoothly, no small feat considering the numerous lightning fast changes they must make as they create a half dozen different characters each.  Standouts include Blair Ross (in a huge comeback after her embarrassing turn in Jekyll and Hyde) as Auntie/The Bearded Lady, Barrett Martin as The Human Pin Cushion/Ray, Matthew Patrick Davis as the Geek, Lauren Elder as the Venus di Milo, and Javier Ignacio as the Dog Boy.

As Sir, Robert Joy delivers an evil performance, which is all the more gratifying when you find out how he ends up.  His Australian accent is a little thick, but is easy to get used to.  In a somewhat larger supporting role, David St. Louis plays a strong, quietly intense performance as Jake, a sharp contrast to his "side show role" of The Cannibal King.  He's pretty good throughout, though his voice is not a perfect match for Jake's two big numbers, "The Devil You Know" and "You Should Be Loved."  Unfortunately, "pretty good" isn't enough, should the show move on.  (The whole time I thought Joshua Henry would be perfection.)  As the men who change the girls' lives professionally and romantically, Ryan Silverman and Matthew Hydzik are excellent.  Silverman plays that fine line between helpful and too good to be true slime to the hilt.  His "A Private Conversation" is a compelling sung monologue, and at the boiling point of a climactic scene, he delivers a crucial line so well, the audience's gasp was loud.  Hydzik is the ideal matinee idol, with an easy, charming smile and an ingratiating swagger, and song-and-dance man moves to spare.  Fortunately, the rewrites allow him a more complex character, which effectively makes him a freak, too, for the time period, while giving the show a current feel. 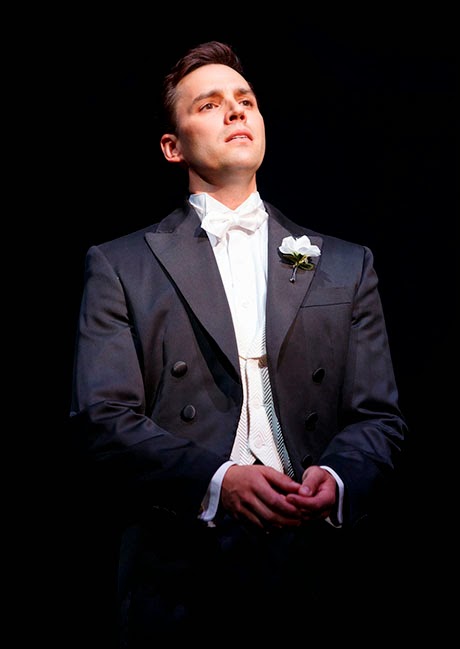 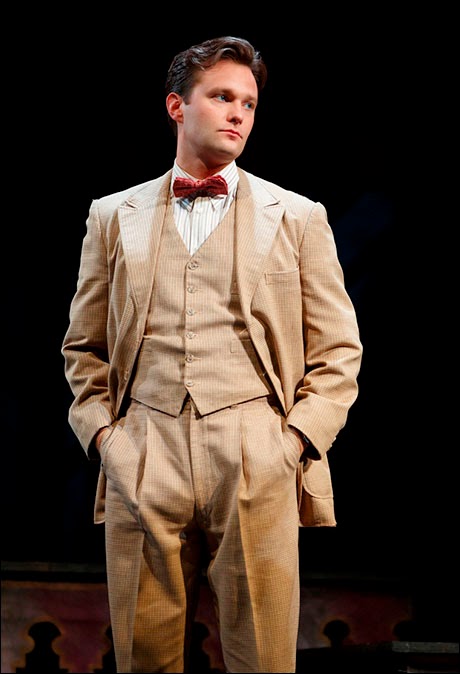 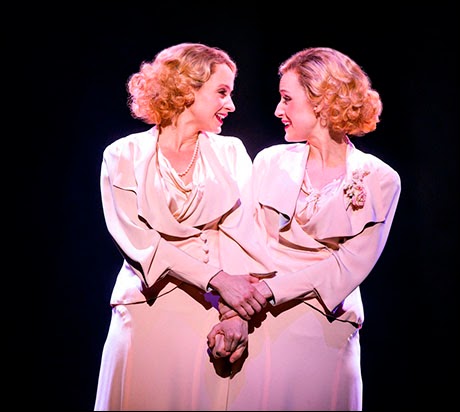 Of course, any production of Side Show, no matter how good it is otherwise, hinges completely how good the ladies are who play Daisy and Violet.  And these two, Emily Padgett and Erin Davie respectively, are superb.  Both possess heavenly voices, different enough to let us see them as individuals, and so lovely together, you almost wish they sang everything in unison.  And they have nailed the physical unison required of this role as well.  Not too far into it, you stop looking to see if they will slip and pull apart because it is so easy to believe they are actually conjoined.  Both "I Will Never Leave You" and "Who Will Love Me As I Am?" remain the centerpieces of each act in their more than capable hands.  The hard part of watching them is deciding who your are going to look at in any given moment.  Padgett exudes a charming, gregarious charisma, while Davie is a study in emotional specificity - her facial expressions are a constant mirror of Violet's soul.

I never thought I'd be able to say this, but they, together, are every bit as good as Skinner and Ripley; this new pair suffers in comparison only in that they are up against a legendary performance that has taken on mythic proportions.  They are fresh and meet every challenge thrown at them - ideal for this mostly excellent reworking.  A few more tweaks and a possible re-casting, and this Side Show could return to Broadway as a main attraction.

(Let me know what you think about this new grading system!  I've already incorporated many of your suggestions!)