It is a true classic, a living landmark, really.  And well into the 20,000 performance range, it is by far the world's longest running musical (a record that would still be true even if you only counted the 17,000+ performances that happened pre-4-year "hiatus").  So, as a devout musical theatre enthusiast, I am almost ashamed to admit that I am just now seeing The Fantasticks live on stage for the very first time.  I managed to get through roughly 15 minutes of the horrible film version before shutting off the DVD player.  I am thrilled to report that I really enjoyed the production at the charming Snapple Center's Jerry Orbach Theatre.

There is that show that is Broadway's longest-running musical a few blocks away, and there's that other show that claims to be "the world's longest-running musical," currently in revival a couple blocks closer.  But there are two reasons why this little show holds the title, despite being the anti-spectacle musical that it is.  First, and perhaps most importantly, the story is both timeless (Boy Meets Girl a la Pyramus and Thisbe with a dash of Romeo and Juliet) and still feels fresh and modern.  The heart wants what the heart wants, right?  And secondly, this show revels in and celebrates its theatricality, wearing its big heart on its mystical, magical sleeve. The Mute (Pierce Cravens) and The Narrator (Michael Sharon)

From the minute it starts, the show is in-your-face presentational, with the Narrator and the entire company speaking directly to us throughout. The staging (on a space roughly the size of a dining room table) is simple, yet effective, with a bench, a chair, a trunk and a sheet with the show logo painted on it, being the entirety of the scenery.  A few props handled by the Mute (the absolutely terrific Pierce Cravens - who also serves as a wall!) fill in the visual blanks.  The rest of the show is left up to our imagination, a relatively easy task, given the sharp book, witty, poetic lyrics and the delightfully simple staging by Tom Jones.  The music - including the standard "Try to Remember" and "Soon It's Gonna Rain" by Harvey Schmidt is just as lovely, and is actually aided by the fact that it is played by an orchestra of two - Robert Felstein at the piano and Maria Banks at the harp. Occasionally does the show feel its age, like when its mysticism gets a tad too self-aware.  Only then does the show betray its trippy early 60's birth.

The current eight member company is very good.  MacIntyre Dixon, as The Old Actor, is a very charming presence, managing to seem both world weary and vibrantly alive at the same time.  His partner in crime, The Man Who Dies - his specialty is faking his death in a variety of ways - is played with superb timing and really amazing physicality by Michael Nostrand. The feeling of spontaneity that this guy exudes is remarkable in and of itself, given that he has played the role over 1,000 times! 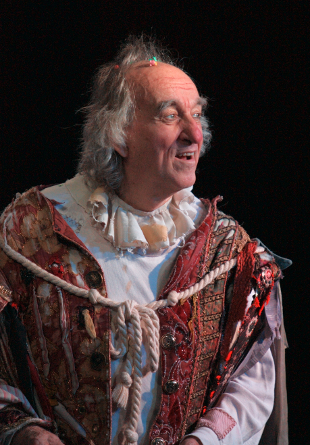 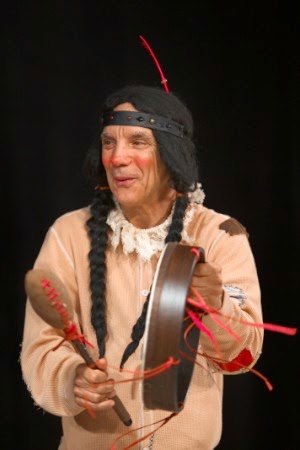 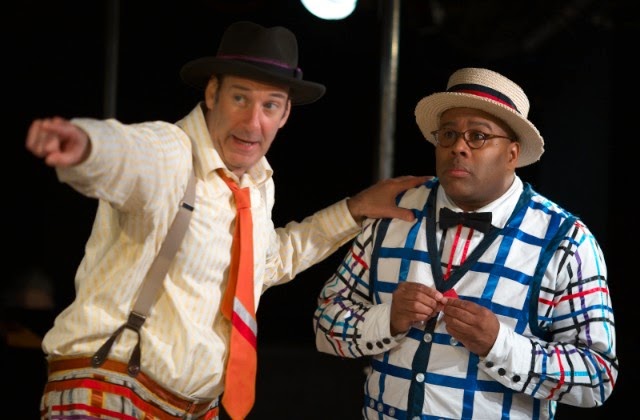 The two fathers, a pair of conniving co-conspirators, Don Sharkey and Kevin R. Free work wonderfully together, with both of their duets being show highlights.  Both infuse their performances with an excellent mix of modern musical comedy finesse and vaudevillian style.  The Narrator (aka El Gallo) is superbly rendered by Michael Sharon, whose sly looks and off-putting dimpled smile are the perfect recipe for an actor who must guide us as well as provide a mysterious "bad guy" character in the story.  I loved his smooth delivery of "Try to Remember." 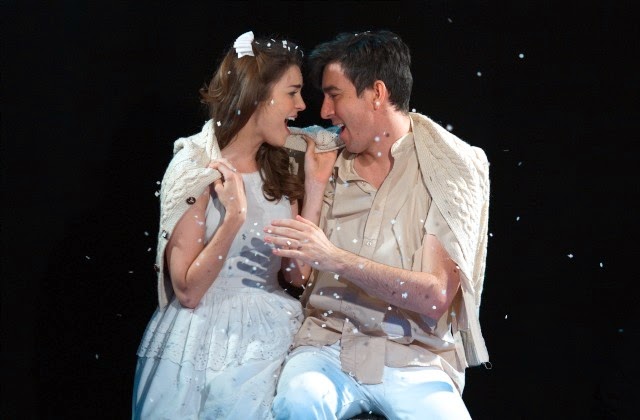 As the central characters, The Boy (aka Matt) and The Girl (aka Luisa) must carry the romantic story in a believable way, of course.  But they also get some great (and very important) opportunities for sharp comedy and some relatively impressive physical demands.  Samantha Bruce is delightful throughout, with a terrific voice and a warm sincerity, while Max Crumm (most famous for his reality show/Broadway turn in Grease) has an engagingly off-handed, low-key delivery and a nice singing voice. If he isn't entirely convincing as a swashbuckling adventurer, he is an interesting actor to watch at all times.  Together, they have chemistry to spare, and I found myself pulling for them every second, despite the obvious-from-the-start and inevitable conclusion of their tale.

What made this show especially good for me, though, was a lovely surprise.  There was a little girl there, who was attending her first "grown up" play.  She was thoroughly enthralled and giggled in delight at every turn, and gasping in awe when the two old actors made their entrance from within the onstage trunk.  And every time fist fulls of confetti were thrown about, her face lit up.  Considering how many times there was confetti in the air, she was lit up a lot.  In this day and age of fancy special effects and cellphone video games to bombard the senses, it is great to see that simple theatricality can still excite.  I suspect that we all witnessed the birth of a life-long theatre lover.  And that was, well, "fantastick."