As a teen in the mid-80s, MTV actually showed music videos, and recording artists became even bigger stars. I enjoyed The Go-Go's hits, especially "Our Lips Are Sealed." And I enjoyed Belinda Carlisle's solo hits, too. "Mad About You" was my favorite. But outside of their biggest pop hits, I knew nothing of the rest of their catalog. 30+ years later, it turns out I'm a fan of their big hits still and I enjoy more of their other songs enough to look into their albums. Why? Head Over Heels that's why.

If you follow this blog or my Twitter timeline at all, it is no secret that I love all things HOH. And this adoration wasn't a given. I will admit I'm starting to suffer from jukebox musical fatigue, and one based on the song list of an 80's group with 5 or 6 recognizable hits seemed even less likely to make me very happy. Still, the pedigree of the show's creators (particularly Tom Kitt, Jeff Whitty and Michael Mayer) and a few of my favorite Broadway regulars (Alexandra Socha, Jeremy Kushnier and Rachel York) piqued my interest enough that I got a ticket. The rest is history. I am, well, head over heels for the whole thing. 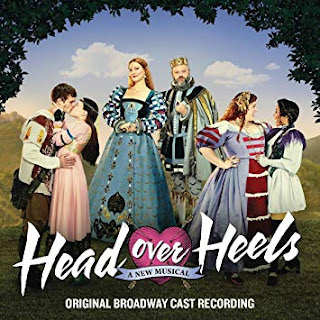 Part of the reason the songs work so well as a score is that the songs do drive the plot, are character driven, and underscore the themes of the clever book (by Jim Magruder). The lyrics are uniformly clever and smart, and though they are a modern departure from the otherwise Elizabethan-esque dialogue, they fit seamlessly. the tonal shift works much like the juxtaposition of the book and songs of Spring Awakening, with the comic irreverence of Mamma Mia!.


While I still enjoy the familiar songs very much, I have to say I've fallen in love with the songs I didn't previously know. Every time I listen to it, I feel like I have a new favorite song! And what makes the whole CD so enjoyable is that, like in the show, the songs are both fun pop and full-fledged Broadway fare. Much of the credit for that goes, I think, to Tom Kitt, who orchestrated and arranged the score. His vocal arrangements are just superb. The band is... sublime.  Kudos, too, to the ensemble, whose background vocals are amazing - they frequently give me goose bumps.

Here are some of the standout moments for me (subject to change depending on how many times I've listened to it):

1. "We Got the Beat": Just like at the show, the CD starts with an explosive opener, featuring fierce vocals by Taylor Iman Jones leading company. I dare you to sit still when you hear this song.


2. "Beautiful": Speaking of fierce, breakout star Bonnie Milligan supplies emotional power and sheer joy in this catchy ode to self-love. One of my favorites of them all.

3. "Mad About You": I love the simple power of Andrew Durand's voice on this number. He sounds so innocent and sexy all at once. Here's a great example, too, of what I meant about the backing vocals.

4. "Automatic Rainy Day": This is the best girl/girl duet since RENT's "Take Me or Leave Me." Milligan and Jones are jaw-dropping not once but twice. (The acoustic version is just as good later in the CD.)

5. "Head Over Heels": Act Two starts with the same toe-tapping blast of fun that Act One does. Again, Durand's vocals are wonderful in their unadorned simplicity. Plus I love the dance break music and "the clap."


The rest of the company is just as terrific: Rachel York and Jeremy Kushnier are great in their duet, "The Old Feeling," and Alexandra Socha is awesome throughout, particularly in "Here You Are." History-maker Peppermint delivers perfectly mysterious vocals in "Vision of Nowness," and oozes sexy charm leading the company in the romp version of "Heaven is a Place on Earth." The bonuses are fun, too. And The Go-Go's fans can rejoice in their first studio recording in years, "This Town," which closes the cast recording.

My sadness at the announced closing of the show is made lighter by this wonderful Original Broadway Cast Recording which is just as great as the show. Get thee to the Hudson Theatre by January 6th! Long live Arcadia!