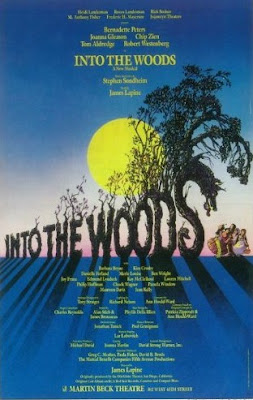 I don't think I could name all of the different productions of Into the Woods I've seen over the years, and I'm positive that I couldn't give you an exact number of times I've seen the show, but it's in the dozens. And that doesn't include the movie version! Clearly, it connects with me. And while I will own up to occasional Woods fatigue, I still love the show. Before you ask, no, it isn't my favorite Sondheim show. (That honor goes to Sweeney Todd.)

There's always a first time, and mine was great with this show. I saw it in early previews in the 4th row, dead center at the Martin Beck Theatre. I was so excited.  It was my first time seeing any show in previews, first time seeing a Sondheim show, and my first time seeing Bernadette Peters! I remember absolutely adoring act one and being intrigued, if not a little bored at the second act. A lot of slower songs and repetitive dialogue, but I knew it was powerful overall. And I finally understood what people meant about a show needing changes during previews. What a great experience for a still relatively new Broadway fan!


Here's a look inside the Playbill from a previewing Into the Woods: 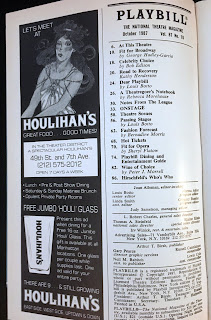 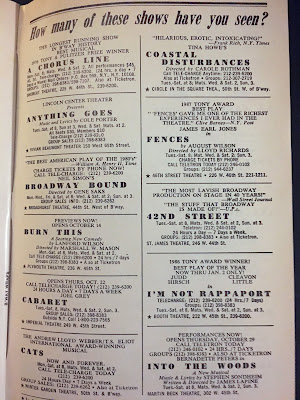 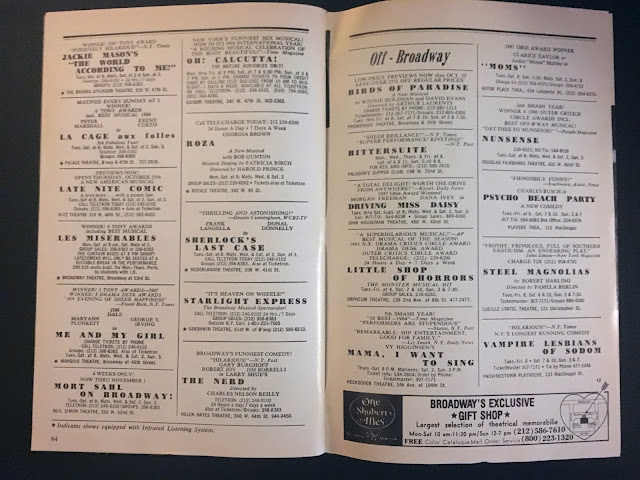 This was another great time to see shows: great plays including Broadway Bound, Burn This, Fences and I'm Not Rappaport; classic musicals including A Chorus Line, Cats, Cabaret and 42nd Street. Imagine a time when Les Miserables  and Into the Woods were new, and The Phantom of the Opera wasn't on Broadway yet. Of course there were flops - Roza and Late Nite Comic  were days away from having their posters hung at Joe Allen's. (I saw Starlight Express the same weekend!) But the real thing of note are the major titles playing off-Broadway! Can you believe it?

Labels: Into the Woods, Playbill, TBT