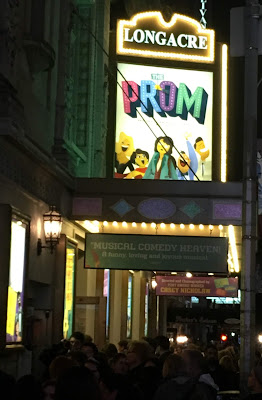 Anyone lamenting the lack of quality Broadway musical comedy just isn't looking hard enough. This season alone, fans have two excellent choices - Head Over Heels and the absolutely joyous The Prom, which opened last night at the Longacre Theatre. If there's any justice, the place won't be looking for a new tenant for many seasons to come. So order your tux and corsage and get in line for tickets.

The completely original new show starts off with a bang and never lets up. And you never want it to, either. The book by Tony-winner Bob Martin and Tony-nominee Chad Beguelin is tight and perfectly constructed. It manages to be both a loving tribute and a parody of old-fashioned musicals of yesteryear. You know the kind - eccentric divas, egomaniac leading men, sexy-smarter-than-you-think chorines and, of course, the ever-resourceful side-kick/publicist. The laughs are endless - I can't remember the last time I laughed so hard, or tried to stifle my laughs for fear that I'd miss the next joke. The rapid-fire quips are chock full of insider Broadway content and an impressive set of jabs to the political climate in which we currently live. In short, it is the antidote to our early 21st century ills.

Then, with just as much humor and a healthy dose of heart, the scenes shift to middle America - home of family values, an active PTA, convenience stores as teen hangouts, and your neighborhood Applebee's. Just as funny, but with a different, more grounded tone. Thankfully, brilliantly, even though this is about high schoolers getting ready for the big dance, it never panders to that low common denominator. The jokes are just as funny and sharp. Of course, when book writers are as on top of things as they are here, they know that it can't all be laughs. The show tackles some major themes with dignity and respect. Tears will be shed. Like a real prom night, you get to have all the feels with this show.

Even better, the score (lyrics by Beguelin, music by Matthew Sklar) is just as tight and thematically sound. The "Broadway" songs are sharp takes on showtune tropes, including the jazz handsy Fosse number "Zazz," and the quintessential diva-belting-her-face-off number, "The Lady's Improving."  The "high school" songs are a sharp take on current sounds - including a very Evan Hansen moment, "Unruly Heart," a tribute to teen angst via video chatting. Things get even more interesting when the two worlds collide, like the crowd-pleaser "Love Thy Neighbor," a number performed by both generations, and the finales of both acts. Not since Head Over Heels have I struggled not to wiggle right out of my seat. Calling these songs "toe-tappers" is a gross understatement. I'll admit to a laughter through tears moment during "Barry Is Going to Prom," too.

Director/choreographer Casey Nicholaw is back in great form here. He shows remarkable restraint and economy. Gone are the excesses of his previous outing, Mean Girls. His dances are thrilling - I'd kill for a lesson on how to do the finale - and they build, add to character, and best of all, they know when to stop. No gimmicky props or staging devices, and, praise Thespis, no tap dancing! And he lets the script speak for itself, walking that perfect line between reality and musical comedy heaven, all with breathtaking pacing. Could it be that he actually trusts the material?

The show's designers are right in line with the excellence of the material. Scott Pask's settings are colorful, simple and hearken back to traditional musicals of old, with modern twists. Both the convenience store and the Applebee's sets were greeted with knowing laughs and applause at the performance I attended. Natasha Katz's equally bright and colorful lighting add to the exuberance, and Ann Roth and Matthew Pachtman's costumes are spot on and reveal much about the characters at first glance.

The cast is just as perfect from ensemble to leads. I love shows where you can see each ensemble member with a distinct character arc, and this is one. Best of all, even as types are played, each one is still unique and interesting. Courtenay Collins is maddening as the sanctimonious "concerned" (and homophobic) parent - she's so good, she made me angry. As the school principal with a liberal streak, Michael Potts is terrific - the perfect ally - and the surprise twist in his character is a lot of fun. Josh Lamon is a scream as the Broadway publicist, a great mix of high comedy and sly finesse.

Isabelle McCalla is sweet and endearing as the closeted girl with a homophobic mother; she really shines in her big solo, "Alyssa Greene." She has palpable chemistry with her secret girlfriend, played by the amazing Caitlin Kinnunen, who is the breakout star of the show. She is the complete package, really funny, and wonderfully dramatic. You'd have to have a heart made of ice not to be affected by her performance.

The foursome of "Broadway actors" in search of a cause define "musical comedy heaven!" Angie Schworer nails the sultry Fosse moves and world-weariness of the chorus girl longing to get her name above the title. (There's a running gag with her that is so on point...) The always reliable Christopher Sieber brings new life to the self-absorbed has been that never was role, including the rollicking showstopping gospel-ish number, "Love Thy Neighbor." Brooks Ashmanskas and Beth Leavel take turns outdoing each other, and the result is narcissistic bliss. She is a ball of fire from start to finish, with her star turn in "The Lady's Improving," and he is heartwarming and hysterically funny (all at once) with his solo, "Barry is Going to Prom."


The truth is, as far as musical comedies go, this one is practically perfect in every way. I was disappointed when it was over, and was floating on a cloud of smiles for days after. Even though the prom decorations were spot on in their cheesiness (our theme was "Night in the City" and I had a flashback during the finale), this is The Prom I never had (things were different in the Reagan years and the closet was deep). It was worth the wait.