It prominently features an open palm. Open palms facing out symbolize honesty and openness. In this case, given that the content of Alanis Morissette's album is the basis of Jagged Little Pill, I'm pretty sure that honesty will be brutal. This is just one major aspect of this logo that I love. In short, the logo is pretty brilliant.

In terms of eye-catching advertising, this logo is aces. A vibrant light blue background behind a practically ember-glowing orange hand certainly grabs one's attention. And, depending on which iteration of the logo you are looking at, the hand has either the title of the show or other lyrics written on it, as if done in haste by sharpie. Edgy and interesting.

And just to confirm it all for fans of the album, the title and tagline are in that same typewriter font found on the cover of Ms. Morissette's magnum opus. Speaking of the tagline - "Our New Musical" - I love the play on the traditional "a new musical."  But even more so, I like the implication. "Our" implies a community, a family. Well, I haven't seen the show yet, but I do know that Pill is about a family. And "our" also implies the inclusion of everyone - the audience, the world. We are all one family, perhaps. 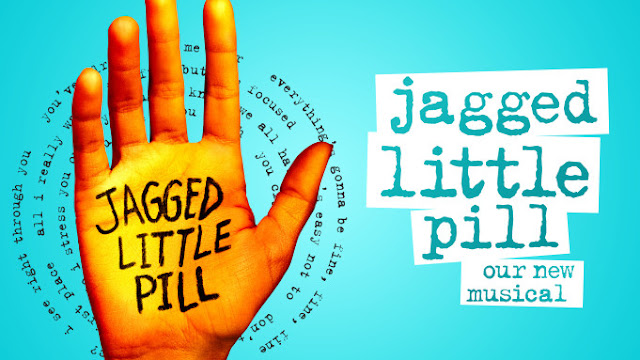 The final element of the logo that impresses me is the halo of lyrics from the album behind the open hand. Not only does it signal for fans what is included, but they are also carefully selected so as to provoke thought. They are hitting you with themes and ideas before you even enter the building. 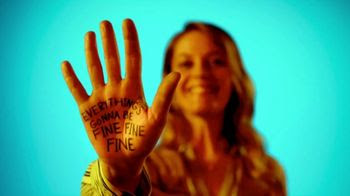 Is this the next step in the evolution of the jukebox musical? I'll let you know after I see it, but this logo certainly has me open to the possibility.