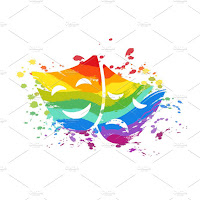 Now that I'm well into 300+ different Broadway productions, I thought I'd take a look through my list of shows and see what is missing! This week's Friday 5 is about those really famous shows that I have never seen a professional production of - not on or off Broadway, not on tour, not even regionally. These titles surprised me! Here they are in alphabetical order:

2. The Odd Couple - Here's another odd circumstance: I've never seen a professional production of this classic comedy, but I've actually directed both the male and female versions!

3. The Pajama Game - One of the few Best Musicals I've never seen at all, not even amateur or the film. I'm still kicking myself for missing the last revival on Broadway.

4. The Sound of Music - Can you believe it? I sure can't! Unless you count the live TV version, it's probably the most famous musical that I've never seen performed.

5. The Wiz - I am keeping my fingers crossed that this show will be revived sooner rather than later. I really want to ease on down the road!

2. TRUE or FALSE: Joseph and the Amazing Technicolor Dreamcoat marked the Broadway debut of Andrew Lloyd Webber and Tim Rice.
*FALSE: They did write Joseph... first, but they made their debut in 1971 with Jesus Christ Superstar.

3. TRUE or FALSE: Sutton Foster's Broadway debut was in the role of Sandy in Grease.
*TRUE: That's right! She was a replacement Sandy in the Tommy Tune revival that added an ! and played the Eugene O'Neill Theatre in the mid-90's.

5. TRUE or FALSE: Hamilton's scenic designer, David Korins, made his Broadway debut designing the set for Bridge and Tunnel, a one-woman play.
*TRUE: Absolutely true. The 2006 show was his first on Broadway!