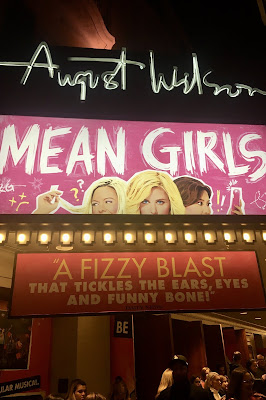 If you had told me that I'd ever go see Mean Girls again, I'd probably have told you there was no chance of that. But crazy things happen. On the spur of the moment, we decided not to see our planned show and started brainstorming possibilities. We ended up seeing two shows that neither of us had even discussed. It's funny how these things usually turn out just how they are supposed to. We ended up seeing a really funny off-Broadway show (Emojiland) and made a return visit to the Plastics. As you may have read in my initial review of the original cast (HERE), I really didn't care for it much. But why not give it a second chance? Lots of people love it, so maybe there was something I missed. Well, I think it fair to say that it will never be a favorite show of mine. there is quite a bit to like about it.


Casey Nicholaw's direction holds up - the pacing is great, and it feels much looser than when I first saw it. In this case, I mean that as a compliment, as there is an ease and comfort level such that it feels more natural. And with that ease, it feels that much funnier in an unforced way. His choreography is as good as ever - no slacking there; the dances are sharp and exciting (I could still do without the tap number, which still seems rather gratuitous).

I was especially glad to see Barrett Wilbert Weed who was on fire and appeared to be having a great time. Her big solo in act two, "I'd Rather Be Me," retains its quality and is still one of my favorite show tunes of the last few years. And her chemistry with her partner-in-crime, Grey Henson is palpable. This time around, I found his performance to be much less obnoxious and (even better) much less of an insulting stereotype, due in large part because he isn't pushing for laughs, letting the material do the work. He's also much more at ease and gives a more varied performance. Thank goodness. The other original cast member I adored the last time around, and just as much this time is Kate Rockwell, who continues to steal the show with her hilarious turn as the very, very dim Karen. What I appreciate about her performance is that she hasn't resorted to cheap tricks to milk the part for more laughs as many long-timers have a tendency to do. Instead, she is opening night fresh. (Since seeing the show, it was announced that both she and Mr. Henson will be leaving the show on March 8. If you haven't seen them, get tickets!)

New (to me, anyway) in the roles of the three adult women is Catherine Brunell, who is particularly good as the teacher, is quite the chameleon. I had no idea she was also Cady's mother this time around; I though they might have split the role. Also new to me is Krystina Alabado, who makes a full meal out of the part of Gretchen. She is really very good, sings like a bird, and is wonderfully affecting. Her "What's Wrong With Me?" was actually touching. What a nice addition to the Plastics! Sadly, the same cannot be said for "guest star" Cameron Dallas.

If his millions of followers are having any impact on sales, it would seem that none of them were in the audience that night at least. I was ready for screams and applause when he first entered. Nothing. Then he opened his mouth. Yikes! Frankly, to call his performance amateurish would be an affront to amateurs everywhere. His monotone line readings, and his "singing" voice were so bad as to be insulting to every cast member and the paying audience. In nearly 37 years of Broadway theater going, his is by far the worst performance I have ever witnessed. An embarrassment, really. (OK, OK...he does have nice abs.)


Finally, there seems to be a power shift going on in Mean Girlsland. Whereas before, Taylor Louderman was large and in charge as head Plastic Regina George, now with Renee Rapp in the role, things are more evenly matched with her nemesis, Cady Heron. That is not a slight to Ms. Rapp, really. She is just not quite as mean. That said, the girl can sing! Wow - "Watch the World Burn" was simply excellent. I look forward to watching a long career for this young talent. I think I said something similar last time around about Erika Henningsen. She has really grown as Cady, with an ease and confidence that was only under the surface before. Now, she has become the meanest mean girl, which makes her fall and eventual redemption all the sweeter. "I See Stars" remains a highlight of the score and show. I am so looking forward to seeing her in Flying Over Sunset later this year. Also, she deserves much credit for carrying the scenes and songs she shares with Mr. Dallas. I hope he sends her flowers after every performance.

And so, my surprise return visit to the August Wilson turned out to be worth it. As Janis would say, the show is tits.