The Friday 5: 5 Shows I'm Surprised I Did See 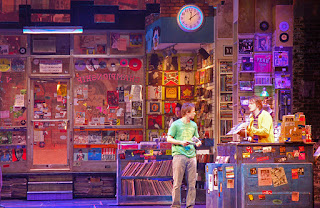 (Answers to last week's Friday 5 Quiz are at the bottom of this article!)

1. Chronicle of a Death Foretold (1995): The shocker of this show is that it ran for almost exactly 2 months in the middle of the summer, including previews. And in that brief period, I saw it THREE times. I almost didn't see it at all. I didn't care for the novel it is based on when I read it in college. But it was fascinating from start to finish. And because I saw it, I could say I saw every Best Musical nominee that season! Bonus: It was my introduction to Michael John LaChiusa and my first time seeing Tonya Pinkins.

2. High Fidelity (2006): I was lucky I got to see this show.  I really liked it a lot; the score and set were excellent. And I loved the cast. Mostly, though, I was lucky because I got to see it at all. With 18 previews and 14 performances total, my opportunities were few! Bonus: It started my love affair with Will Chase, Jenn Colella and Tom Kitt!

3. In My Life (2005): The show only made it through 61 performances, but I had to see it. Why? Because it was lone of the first shows I heard about through chat rooms.  I had to see just how bad it was. I mean, dancing with skeletons!? Well, it wasn't so bad as much as it was a messy vanity project. Bonus: The show put Christopher J. Hanke and David Turner on my radar, and it gave Jonathan Groff his Broadway debut!

4. Leap of Faith (2012): As with all of these shows, it's a miracle that I saw it all, given the short amount of time it was actually around (25 previews, 19 performances). But I'm glad I did. I am a huge Raul Esparza fan and had to see it. Bonus: I got to see some of my favorite new Broadway talent, including Ann Sanders, Jessica Phillips and a pre-Hamilton Leslie Odom, Jr..

5. The Story of My Life (2009): Because I loved him in High Fidelity, I made sure to get a ticket to this show with Will Chase, and I'm a fan of Malcolm Getz, too. No brainer, right? Well this one is probably my favorite "get." Not only did I love it, but I saw one of its five performances! FIVE! Bonus: The only thing better would be the ability to say I saw a show that opened and closed on the same night!

Final Jeopardy: What is Pacific Overtures?

Labels: Chronicle of a Death Foretold, High Fidelty, In My Life, Leap of Faith, short runs, The Friday 5, The Story of My Life