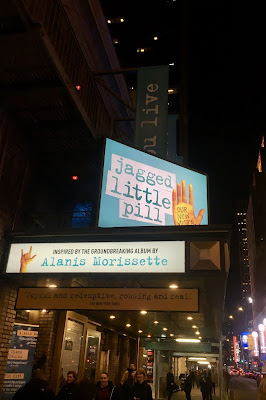 "Ooh, this could be messy..." intones the omnipresent chorus at the start of Act Two from Alanis Morisette's song "Hands Clean." And, indeed the world of Jagged Little Pill (as told by the words and music from Morisette's seminal album as well as Academy Award-winner Diablo Cody's book) is messy. Life is a shit storm these days, let's face it. Social media, gender-identity, climate crisis, quiet rage that simmers until the pressure builds - you can't get through a day in the 21st century without being touched by any one of a hundred issues that have bombarded our day-to-day existence. And that chorus, alternately writhing as a mass playing a characters' demons/conscience and then representing society at large serves as a constant reminder of the mess.


While I've read that some theater-goers take issue with the sheer quantity of subjects Cody's book touches upon, I think each issue is entirely necessary. Adding to the intensity of the very real problems the Healy family faces in the show, no one lives in a one-problem vacuum. Instead, the jumble of subject matter brings an uncomfortable reality to this surprisingly brave piece. As the cast ebbed and flowed physically and tonally, I thought more than once that watching it all unfold wasn't unlike a quick spin through our individual timelines on InstaTwitBook. In spite of a wide variety of subjects, the whole thing is rather tight and fat-free; each moment is important to the next and to the whole. Ms. Cody's book is that rare and often illusive example of a strong book that supports a strong score.

Make no mistake, either, that this is just your run of the mill jukebox musical. Believe me, I, too, have had my fill of the genre, and frankly, I may go in to each with a chip on my shoulder against them. But I am pretty sure I was sold on JLP before the sung overture was even over. Morissette is a gifted songwriter who never settles for the "easy." Rather, her lyrics are layered in such a beautiful way that they can be enjoyed on the most basic level, but hook you so deeply that you feel everything in a swirling mass of emotion. While the words themselves don't always seem on the surface like a sure thing for a theatrical treatment, they are so rich, so human, so raw...watching them take life on the Broadway stage makes so much sense it is unbelievable that it has taken this long for it to happen. It was worth the wait.

And how about how that album-turned-score translates to the stage? Tom Kitt supplies his usual genius to the evening seamlessly bridging the gap between pop/rock and Broadway with his gorgeous orchestrations and vocal arrangements, as with his work on American Idiot, one could argue that he has improved upon the original given the context of the piece. It is largely because of his work that the way the music is integrated with the book and its care for character is hugely successful. Like I said, it is almost as if the music was always meant to be part of a musical.

Where director Diane Paulus' work ends and choreographer Sidi Larbi Cherkaoui's work begins is often anyone's guess, so intertwined is the staging with the movement. Both are in top form here, with Paulus' pacing at a perfectly urgent pace, rarely pausing for us to catch our collective breath. These are desperate, breathless times. Perhaps because Cody's genre is usually film writing, Paulus has taken her from cues a need to frequently stage sequences like film scenes. Notable among many, the scene where everything we have just witnessed is done in reverse is breathtaking in its detail and skilled performance - you would swear you were watching a film played in reverse. Cherkaoui's sometimes jarring, always thrilling movement is a pleasing blend of contemporary and jazz, and is striking in its simultaneously general world view and character-driven specificity. The sheer theatricality of the movement during Mary Jane's overdose ("Uninvited") makes an already sad moment terrifying and deeply moving. Often featured dancers Ebony Williams and Heather Lang are truly brilliant; their future is bright, and I'm sure their careers will be lengthy.


The look of the show enhances the action without overwhelming it. Riccardo Hernandez's scenic design is constantly in motion, featuring sliding panels which change the shape of things in the blink of an eye, while the videos projected on them in a disorienting blur (designed by Lucy MacKinnon) allow us to experience the increasing disorientation of the characters. Emily Rebholz's costumes wordlessly give us insight to every person on the stage. The real design stars here, though, are sound designer Jonathan Deaks and lighting designer Justin Townsend, who combine to create a glorious rock musical while never forgetting the story at its heart. In short, the show is thrilling to look at. 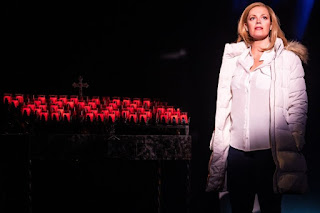 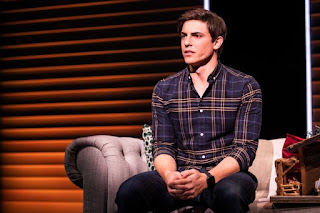 The cast. Oh, the cast! Lead by a career-defining turn by Elizabeth Stanley, this company has no weak link. She is fearless, intense, and profound in her portrayal of the perfect-on-the-outside-dying-on-the-inside Connecticut housewife. Hers is a performance that builds and builds until its tragic explosion. But she is also so careful to dole out the emotions so as not to overwhelm or overplay her hand; no, she is economical with every movement, every rise of voice, every tear. As her perfectly molded son, Derek Klena is, well, perfection (I wish he had more to sing), looking Ken doll perfect while betraying his self-doubt (and later self-loathing) with blink-and-you-miss-it changes in his face, eyes and posture. Sean Allan Krill finally in a role worthy of his talents, plays the frustrated husband who hides behind his work but wants desperately to fix his marriage quite well. It is in act two, when his character faces some harsh realities and very tough choices that Krill really takes off. His "Mary Jane" is a highlight of the show.


There is a trio of supporting characters that standout, not just because of the plot, but because the actors playing them are really doing marvelous work here. As privileged bad boy Andrew, Logan Hart handles the demands of being an all too recognizable villain (and a very disturbing depiction of a rape) in all the right ways, more often wordlessly than by any other means. John Cardoza (an understudy!) was smashing as Pheonix, the new kid/love interest, with a set of his own problems. He has a wonderful voice and was a perfect match for his frequent scene partner - his contributions to "Ironic" and "Head Over Feet" were beautiful to hear. And as Bella, a rape victim struggling to find her voice and regain her sense of self, Kathryn Gallagher provides a grounded, but giant portrayal. Her face and the way she held her body spoke volumes without benefit of words. Her work here is brave and unflinching. Brava.


For me, though, aside from Ms. Stanley, the two standouts from a company filled with them are Celia Rose Gooding in her brilliant Broadway debut, and Lauren Patten who I loved in Fun Home, but who I now add to my must-see list, no matter the project.  As Frankie, the adopted daughter, Ms. Gooding makes full advantage of this opportunity to represent. Frankie, an African-American, lives white privilege 24/7, and confronts that reality on a daily basis. Gooding effortlessly depicts the inherent contradictions of her situation, from anger to resignation to rage and back again. And what a voice! Every time she opened her mouth to sing was an edge of your seat thrill ride. I'm not sure hyperbole is even possible when talking about the tornado of emotion that is Ms. Patten. Her time on stage feels short, and every time she stepped into the light, you could feel the audience leaning forward in anticipation. Funny, outrageous, troubling, she is bliss, giving one of the greatest single performances I've ever witnessed. Everything you've heard about her showstopping (literally) "You Oughta Know" is true, but to experience it live is a true gift. People will be talking about it for years.

If there is any justice, people will be talking about Jagged Little Pill for years. It raises the jukebox musical to an art form.