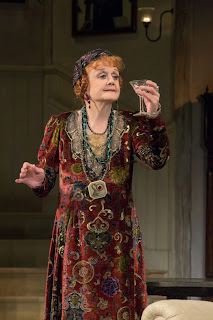 Many, if not most, of our favorite musical theater stars have also spent their fair share of time trodding the boards in straight plays, too. Take one of the greatest of all time, Angela Lansbury. Sure, she won Tonys for some of theater's greatest musical roles - Mama Rose, Mrs. Lovett, Mame - but she also appeared on Broadway in many plays as well. She even won a Tony for one - as Madame Arcati in Blithe Spirit. Many of Broadway's leading ladies have done the same, and that's what today's game is all about. Can you name the actresses described below?
BROADWAY GAMES:
The Play's the Thing
Actress Edition
1 This 5-time Tony nominee (and winner of one - for a classic musical) was also in a pair of plays, In the Next Room, or the Vibrator Play and Meteor Shower. Who is she?
2. This beloved actress won both of her Tonys for leading roles in musicals, but she's also appeared in such plays as The Three Sisters, The Anarchist and Noises Off. Who is she?
3. This dynamic Thespian has actually been in more Broadway plays than musicals, and she won two Tonys for The Real Thing and Death and the Maiden to one Tony for a musical by Andrew Lloyd Webber. She reprised her role in that musical's recent revival. Who is she?
4. This former waitress and singing legend is currently appearing in The Minutes, her first Broadway play. Who is she?
5. This Tony winner is probably better known for her roles in plays like A Raisin in the Sun and Gem of the Ocean, but she has appeared in several musicals, including Into the Woods and Jelly's Last Jam. Who is she?
*****     *****     *****
ANSWERS TO LAST WEEK'S GAME
1. The Hadestown concept album came first. It was released on March 9, 2010. Reeve Carney's Broadway debut, in Spider-Man: Turn Off the Dark, came on June 14, 2011.
2. Gwen Verdon won her last Tony Award in 1959, for Lead Actress in Redhead. Fiorello! and The Sound of Music tied for Best Musical in 1960.
3. Justin Paul came first. He was born on January 3, 1985. Benj Pasek arrived 5 months later on June 9, 1985. Either way, they are so young!
4. The Uris Theatre (now the Gershwin) opened on November 28, 1972 with Via Galactica, while the Minskoff Theatre opened three and half months later on March 13, 1973 with Irene.
5. In Mean Girls, Janice sings "I'd Rather Be Me" before Cady sings "I See Stars." They are pretty close, though. Both are in act two.
6. Mamma Mia! welcomed Carolee on October 20, 2004, and Beth on September 22, 2009, almost five years later!
7. All three were Best Musicals in this order: How to Succeed... (1962), Hello, Dolly! (1964) and Fiddler on the Roof (1965).
#2381
Posted by JK at 7:00 AM