This week’s entry is about the 1949 Original Broadway Cast Recording of South Pacific.

Broadway in a Box CD Review:

A perennial favorite for its combination of grand entertainment and weighty social issues, this original recording of South Pacific holds up as a very satisfying representation of this seminal Rodgers and Hammerstein score. On balance, I prefer the music and performances from the most recent Lincoln Center revival, but it’s a pretty close call. 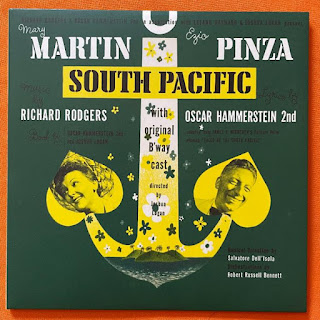 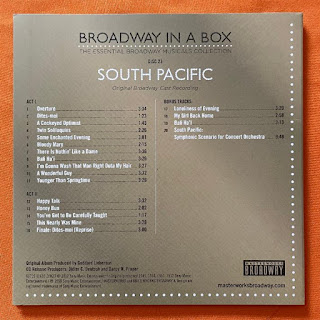 At the center of things, of course, are the characters of Nellie Forbush (sung by Mary Martin) and Emile de Becque (sung by Ezio Pinza). Naturally they both sound wonderful, separately and together (and sort-of together in “Twin Soliloquies”). I slightly prefer both Kelli O’Hara and Paolo Szot from the revival; they have equally amazing voices but bring perhaps a little more personality to their interpretations. However, I can’t imagine that anyone has ever provided a more perfectly sung delivery of “Some Enchanted Evening” than Pinza, who manages to make it sound simultaneously grand and intimate.

Juanita Hall tears it up in the role of Bloody Mary, certainly one of the juicier roles in the musical theater repertory; she oozes warmth and humor, as well as pathos. “Bali Ha’i” is the highlight of the entire recording; with the combination of Hall’s pitch-perfect characterization and one of Rodgers’ most vividly evocative melodies, it’s easy to imagine what it would have been like to be on this special island.

Sharing a stage (or, in this case, a CD) with these three vocal powerhouses, William Tabbert struggles to keep up in the relatively thankless role of Lt. Cable. He does a fine job with one of the show’s most beautiful songs, “Younger Than Springtime,” and does his best with “You’ve Got to Be Carefully Taught” - a song which has always struck me as somewhat underwritten, given its importance to the over-arching theme of the musical. 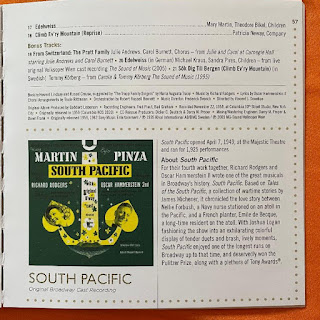 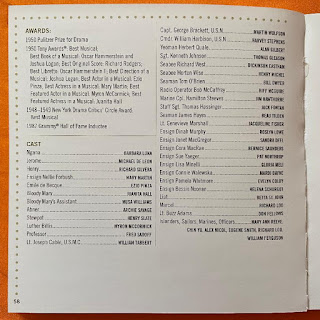 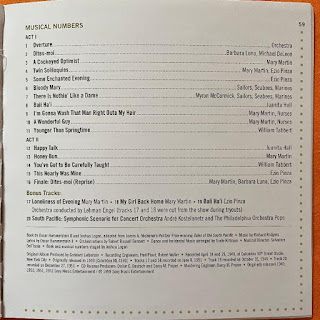 The oldest recording in the box set, this is a mono recording from the early LP era. The sound is still quite clear, with just a little too much echo in the “brassier” sections. The limited recording capacity means that cuts are made to reprises and other music that would probably be included in the era of CDs or digital media, but this CD makes up for it with a generous selection of bonus tracks. Two of these are songs for Nellie, sung by Martin, that were cut from the show in tryouts: “Loneliness of Evening,” a wistful ballad reminiscent of “Hello, Young Lovers,” and the somewhat bluesy “My Girl Back Home.” The third bonus track is Pinza’s version of “Bali Ha’i.” The final track is a very pleasant ten-minute suite of music from the show, conducted by Andre Kostelanetz with the Philadelphia Orchestra Pops.

Next up is the Original Broadway Cast Recording (highlights) of Sweeney Todd.