This week’s entry is about the 1979 Original Broadway Cast Recording (highlights) of Sweeney Todd.

Broadway in a Box CD Review:

This is another one of those recordings that has been so familiar to me, for so long, that it’s hard to hear it with fresh ears. Accordingly, I’ll spend most of my blog space discussing the status of this CD as a “highlights” recording. Suffice it to say that, after seeing and hearing many versions of this singular and stunning piece of musical theater, the original is still probably the best. 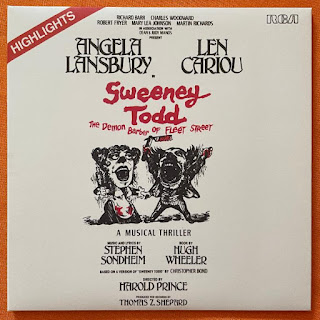 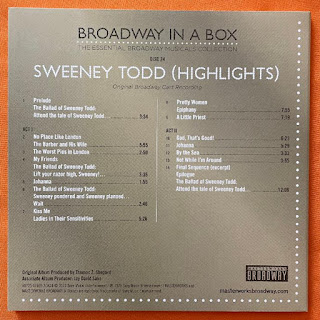 The cast is, of course, stellar from top to bottom. Needless to say, no one will ever top the delicious humor and desperation conveyed in every moment of Angela Lansbury’s performance as Mrs. Lovett. In the title role, I’ve probably heard some actor-singers who lean more dramatically into the bitterness of this character in songs like “Epiphany” - and I’ve heard opera singers perform with greater technical prowess - but Len Cariou’s stoic approach stands the test of time.

Inevitably, one of my biggest curiosities about this CD was what would be included and what would be cut from the full two-disc recording. Given the completeness of the full version, and the airtight musical integration of the score, the producers surely had to make some difficult choices. Understandably, almost all of Todd’s and Lovett’s material was kept at the expense of some of the secondary characters. Overall, the highlights recording preserves the smooth flow of the score, with little sense of discontinuity; in that respect, I can’t really fault the choices that were made (though I will express my disagreement on one or two things). 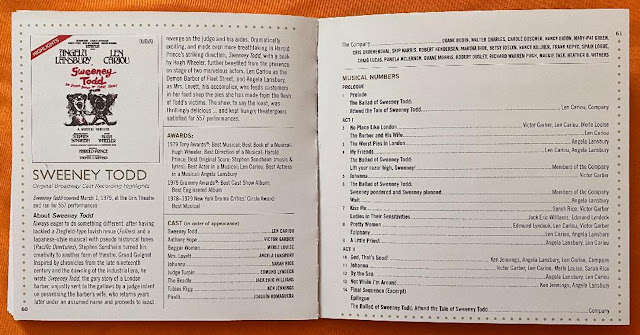 The main songs (or sections of songs) that were omitted from the highlights recording include:

On the other hand, these sections were included but strike me as very much on the bubble:

I think it’s likely that “Ladies in Their Sensitivities” would have been cut if it were at all possible, but was kept to avoid leaving a gaping hole between the two halves of “Kiss Me.” If I had been in charge, I think I would have cut the “Ballad” sections and the lead-in to “Pretty Women” in favor of either “Green Finch and Linnet Bird” or “Pirelli’s Miracle Elixir.”

The recording itself is top-notch, and I’m sure the full recording was a shoo-in for the cast album Grammy Award that year. This is probably a feature rather than a bug, but I found myself frequently adjusting the volume while listening to this CD; if the sound level is comfortable for listening to “The Barber and His Wife” or “My Friends,” it will make the whole house shake when you get to the choral sections of the “Ballad” or the end of “Kiss Me.” In my experience cast recordings typically even things out a bit, with these kinds of dynamic extremes more typical of classical recordings; but that’s probably appropriate for this particular score.

The next (and final) CD in the box set is the Original Broadway Cast Recording of West Side Story.