This week’s entry is about the 1957 Original Broadway Cast Recording of West Side Story.

It’s difficult to listen to this original recording without making comparisons to subsequent versions that I’ve seen and heard: the classic 1961 movie; the great-but-not-perfect 2009 Broadway revival; the super-heated, incredibly moving 2020 Broadway revival; and of course the 2021 movie, which (like many of you, I’m sure) I’ve watched multiple times. I’m happy to report that the original holds up very well, and if it won’t necessarily become my go-to recording of the show, it boasts a couple of unique virtues that make it well worth revisiting. 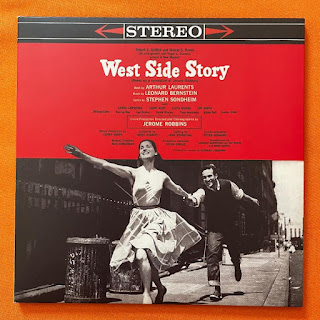 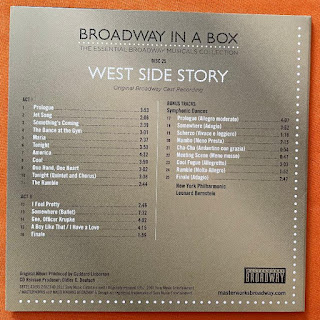 The talents of the legendary original cast definitely shine through on this recording. Chita Rivera’s torrid performance as Anita set a very high bar for all who followed (thank goodness that list includes the likes of Rita Moreno, Karen Olivo, and Ariana DeBose). The thing that really sets this recording apart, though, is the definitive performance of Larry Kert as Tony. With the passionate people who surround Tony in the show, and with the deliberately introspective music Tony is given in this score, it can be a challenge for an actor to really make a mark in this role, but Kert’s singing has an intensity and elegance to it that is unmatched in any subsequent version I’m familiar with.

In terms of the content of the CD, I was struck by two differences between this original version and the more recent and familiar stage and screen versions. This earliest iteration of “America,” of course, only features the Puerto Rican women, and that makes it seem less tense and dramatic than the movie version (now also used in stage productions) that pits Bernardo directly against Anita in a battle for the soul of their community. On the other hand, it was lovely to hear “Somewhere” performed in its original form and setting, as the centerpiece of the second-act ballet. It’s been a long while since I’ve heard the few jagged lines sung by Tony at the start of the ballet, and it was jarring in all the right ways. 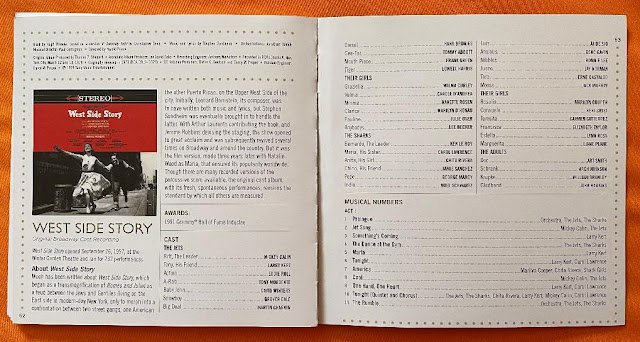 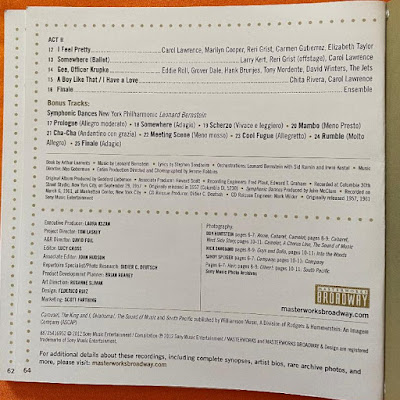 The sound quality of this recording, from the early stereo era, is quite good, with a nice balance between orchestra and singers and a wide dynamic range. I’m always surprised, given how stacked with music this show seems to be when seen in full, that the entire score fits comfortably on one disc, with few noticeable cuts. In this case, there’s even room for Symphonic Dances, a beautiful twenty-minute suite of music from the show, performed by Leonard Bernstein’s New York Philharmonic Orchestra.

The inclusion of that particular bonus material highlights one inevitable drawback of this original cast recording: orchestra size. When it comes to the score of West Side Story, bigger is better, and even a large Broadway orchestra is no match for something like the New York Philharmonic, which can also be heard on the recent film soundtrack.