At the Stage Door: Passion 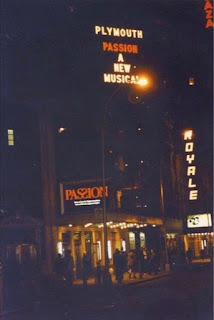 I'm pretty sure I've shared with you that I was not particularly fond of Passion the first time I saw it. But as a life-long fan of Sondheim, I knew I could never fairly judge a piece of his by just one viewing. And so I returned - and I loved it. I loved the beauty of the score, the intrigue of plot, and the challenges of understanding the motivations and actions of Fosca, Giorgio and Clara. As I saw it over the course of its run (and it was SEVERAL times), one thing each performance shared was an uneasy audience, laughing in odd places, many leaving in the middle of the show. In short, there were basically two types of audience members: those who adored it and those who abhorred it.

This was well before the organized (and crazy) fandom, and stage-dooring was an easy thing. With Passion, it was even easier. There weren't a ton of eager fans waiting for the stars to leave. Well, it so happens that my friend (who saw it each time with me) and I decided we wanted to stay after a matinee just to offer our support, sure that the lack of positivity in the house that afternoon was at an all-time low.  It was a bright, warm afternoon, and the street was pretty clear. 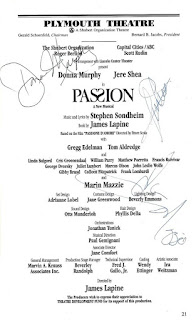 Slowly, the cast filed out, smiled at us and went on their way. When Marin Mazzie, Jere Shea and Donna Murphy came out, it was different. Each stopped and talked to us (there were about half a dozen of us there), shook hands and talked with us about their experiences. It was lovely. They offered autographs, which we all accepted (none of us actually asked). We continued chatting while they signed, when all of a sudden, a new fan came into the picture.  I'll never forget it. 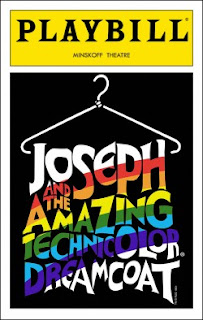 All of us - cast and fans- turned as one when we heard a loud shriek from woman at the edge of the sidewalk. "Oh my God! YOU have to sign my program!" We all looked at each other. Who was she screaming at? Next thing you know, she is literally pushing all of us aside trying to get to the object of her shrieks. (Imagine anyone elbowing Donna Murphy out of the way...) She honed in on Jere Shea with the pinpoint accuracy of a laser beam. He blushed.

"Oh my God, oh my God, oh my God! You were so fantastic! I loved you so much! And you were so FUNNY!" His mouth dropped open. The rest of us sort of gasped and looked at each other like, "Is this lady drunk?" Next thing we knew, she thrust a magic marker and a Playbill from Joseph and the Amazing Technicolor Dreamcoat into his hand and continued to gush, "You were just fabulous as the Elvis impersonator." I don't know how he kept it together... 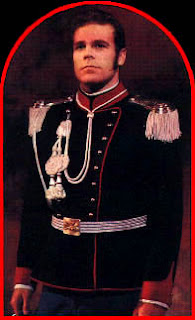 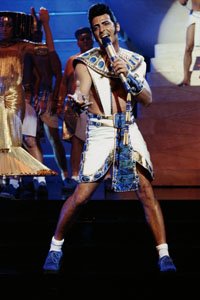 Maybe it was the sideburns?

Jere was kind. He paused, and said, "Thank you, ma'am, but you have the wrong actor. I'm in this show." He gestured to the theater. "No, sir! I know I just saw you as Elvis." "Ma'am, really.  I'm in this show. Look!" He pointed to the display window clearly showing him bare chested and holding onto Marin Mazzie. The woman looked visibly upset. We all, I think it safe to say, expected her to apologize and walk away. No.

"Fine," he said calmly, "I just wanted to be sure you really wanted my autograph." And he signed it. She left happily, and we all stood there dumbstruck.  Somewhere there's a lady with a Joseph Playbill signed by Jere Shea - that fabulous Elvis impersonator.