The Waverly Gallery is a play I'm looking forward to this season, mainly because Kenneth Lonergan is a writer I've gained quite an appreciation for, as well as the all-star cast. I admit that I had to look up the play to see what it's about, but does the logo entice without that knowledge?

At first glance, the logo is somewhat somber.  What is eye-catching is the names of the stars and the famous playwright. That isn't a bad thing. After all, that is its primary purpose - advertise! But it does offer a window into the play as well.

Its watercolor style certainly matches the titular "gallery." And the penciled in New York City covers the "Waverly" part. The whole thing is very "arty," including the color pallet down the side, as an artist might layout on an unfinished piece to keep them in mind. Interestingly enough, one iteration of this logo has that pallet at the bottom vertically, which looks a lot like a New York skyline.

Knowing a little about the play offers a deeper understanding of the logo's images, too. The story tells of an aging art gallery owner who is showing signs of Alzheimer's Disease. A closer look at the drawing reveals that the detailed image of Washington Square Park is starting to fade. The light smudges of color suggest the same, as if the painting was once complete and vivid, rather than unfinished. Then there is the woman in the foreground walking her Dalmatian. She is similarly disappearing from the picture.  What an amazing image. It makes me look forward to the production.

Still, if serious plays with a New York setting aren't your thing, and/or the cast doesn't entice you, I'm not sure this informative, artsy logo would be enough to get you to buy a ticket anyway. 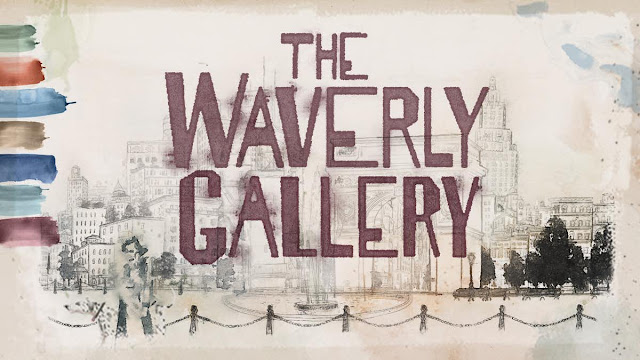