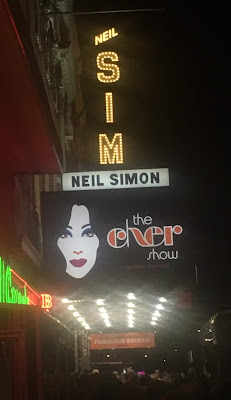 Believe it or not, there are people who go to The Cher Show and don't know much of anything about the titular Goddess Warrior. I found this out when the woman sitting next to me wondered rather loudly, "Who the hell is Cherilyn Sarkisian?" (She also seemed surprised that it wasn't a drag show.) Now, don't get me wrong. I learned a few things about one of my favorite artists before the night was over: her abstinence from drugs and alcohol in the 60s and 70s is both admirable and surprising - she was America's first hippie after all, and I did not know she has severe dyslexia and both a paralyzing fear of failure and an endearing confidence. It's always nice to come away from a show a little smarter than when you arrived at the theater. And while this show hasn't really changed my opinion of bio-musicals, I can happily report that I had a fantastic night and got much more than my money's worth.

I'll be straightforward here. Rick Elice's book goes a little too far into the Behind the Music realm, with some rather lengthy stretches of factoids. He also loses focus a little when he can't seem to decide how far to push the three Chers device or if he really wants to make this about Cher putting on a show about her life. I'm not sure why he couldn't figure out how to make both work consistently and together. Had he been more successful, the corny segues into some songs and the sit-com level jokes could have peacefully coexisted with the sharp wit, genuine turmoil and social commentary offered up by the 3 Chers.

I'm also not sure why (I hope I'm not opening a can of worms here) there is an insistence in call Cher's son Chaz from birth to present. Perhaps Sonny and Cher referred to young Chastity as "Chaz," or maybe Cher herself didn't want it addressed. But at least the people around me noticed it and murmured every time it came up. I got the sense that the people wanted to support his transition. Had the book had more focus (and some editing), this wouldn't just be a good jukebox musical, it would be a very good musical. Period. Before Cher tracks me down and gives me the Moonstruck treatment, let me say that I had a fabulous time, and I'm glad I saw it.

Jason Moore's direction, like his subject, is slick, inventive and has that glitzy-glam thing down pat. Enter Christopher Gattelli, who has really brought his A game here. The "concert/video" choreography is so energetic I think I got a contact high from the pheromones emanating from the cast. Calling it athletic and polished doesn't quite do it justice. The final sequence - the Farewell Tour montage I'll call it (there is no song list) was so incredible I still haven't quite come down from it. That said, there are two showpiece numbers that Mr. Gattelli will want to recreate when they put together a musical celebrating his life's work (and I'm sure they will). Those numbers are the ultra sensual and dangerous "Dark Lady" (featuring the remarkable Ashley Blair Fitzgerald and the male ensemble) and thrilling Fosse-esque sexiness of "The Beat Goes On." Brilliant, both.

The physical production is very "Cher", too. I mean, Christine Jones and Brett J. Banakis's set design prominently features the letter "C,' and the glitzy subtlety of a Cher concert. Lighting design rock star Kevin Adams does his usual amazing job, supplemented by interesting video screens and rotating panels that show off Darrel Maloney's many projections. But the co-star of the show is really the truly remarkable costumes designed by the legendary Bob Mackie. There really aren't adequate words to describe what it's like just being in the same room as those beauties. (The number that was an excuse for a fashion show garnered squeals of delight, ooh and ahhs, and a loud ovation at the end.)

I would be remiss not to call out the uber-talented ensemble, triple-threats all. They ooze sex appeal, charm and a great deal of wit, and their nightly task is not an easy one. I can't even imagine how exhausted they must be by the frenzied finale. Bravo to all. As for the supporting cast, they are all aces as well. Matthew Hydzik does well by his impression of stoner musician Gregg Allman, and the always reliable Michael Berresse is a hoot as Bob Mackie, as well as spot on with his take on Robert Altman. It's great see him get to dance again, too. Personal favorite of mine, Emily Skinner, doesn't disappoint as Cher's mother, Georgia Holt, or with her cameo as one of my idols, Lucille Ball. There's just something about the way she commands the stage.

Jarrod Spector's star turn as Sonny Bono offers a brilliant mix of protagonist charm and antagonist cruelty during his time on stage. He offers more than a simple impression, creating an actual character that these types of musicals often lack. The result is crucial to making this piece have some dramatic heft; it is easy to see why Bono was both the love of her life and the bane of her existence. Spector is a force unto himself, holding his own against three very large presences.


And what magnificent presences they are. Audiences will flock to this show so long as the ladies playing the title character (and yes, I mean character) offer a ferocity that mirrors their perception of the icon, and a sensitivity to the trials of their beloved as well. Yes, they can sing the role, and yes they do amazing interpretation. But, thankfully, they never approach camp - if you are looking for a drag show, this won't be your cup of tea. That said, you get much more than impersonation, too. Because of the conceit of the show, we don't just see a linear birth to present day pageant of a life lived. These actresses get to portray that oft thought of fantasy "If only I knew then what I know now" or "this is what I'd tell my younger self..." Micaela Diamond (in a glorious Broadway debut) nails the innocence, impetuousness and wonder of love and youthful ignorance, while Teal Wicks brings a lot of gravitas to one of the most difficult periods of Cher's life - the rise and fall of Sonny and Cher. Though much of her time is spent being down, angry and hurting, Wicks makes you feel for, and pull for, our heroine. 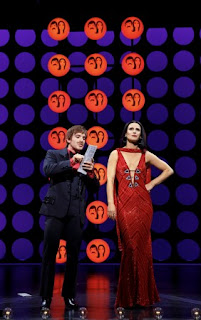 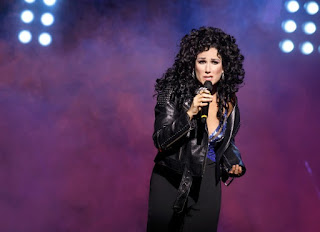 It is Stephanie J. Block, however, that really keeps this monster of a show under control and bursting with energy at the same time. From her first appearance - and her resemblance in every way to Cher is uncanny, but never unsettling - Block is IN CHARGE. I don't think I've ever been more impressed with her voice, and her acting is superlative. She digs deep to bring us this icon in full honesty - warts and all, and smarter for all of the ups and downs life threw at her. Ms. Block fills in the blanks and hints at what is missing in some of the book; she adds depth even when the material isn't there. Hers is a performance not to be missed.


The end of the show is thrilling montage of all of Cher's farewell tours. The show doesn't shy away from the hilarity of that, even going so far as to project the names and years of each "final" farewell. And yet, just before the final blackout, when Cher intones, "You haven't seen the last of me," it isn't a laugh it gets, it is a cheer. After all, you don't laugh at the battle cry of the Goddess Warrior.