REVIEW: The Phantom of the Opera 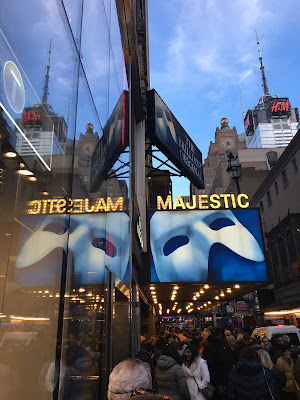 In the interest of full disclosure, I haven't been inside the Majestic Theatre in roughly 20 years, mainly because The Phantom of the Opera isn't one of my favorite shows. I have heard wonderful things about the current leads, and thought, why not revisit this Broadway classic? I figured it would at least be a pleasant experience, but nothing prepared me for how much I genuinely enjoyed it. What a terrific surprise!

As the show approaches its 31st anniversary on Broadway, it is important to recognize that the contributions of the design team are as stunning and beautiful today as they were in 1988. Not only do Maria Bjornson's set and costume designs look pristine, they are a reminder of spectacle seldom seen these days. They rely on color, flair and old school stage magic, with the automated scenery used to accentuate the mystery of the story, not to coax applause or overload the senses to cover for a story that is lacking. To be fair, the much storied falling chandelier is, too me, still a creaky anti-climactic yawn. But the Phantom's lair is as much of a goose bump raising thrill as it ever was - twenty years later, I am still impressed by it. Andrew Bridge's lighting also provides a great deal of mood and thrills on their own.  I mean, come on, we can admit to each other that flickering candles slowly rising from the misty floor is a wow moment, can't we? If I had to grouse about any technical element, it would be the uneven quality of Mick Potter's sound design. Whole sections of the dialogue and songs were muddled by balance issues. But by and large, the physical production is in opening night shape. 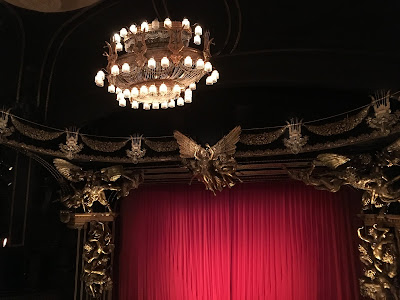 In terms of the performance, Phantom is also remarkable for its intensity and maintenance. At the intermission, we wondered if Hal Prince was in the audience, so on point is the company. No resting on laurels here - from the corps de ballet executing Gillian Lynne's showy choreography with precision, to the entire company fully embracing (and not over-doing) the book's Gothic melodrama - everyone is bringing it. I've seen shows less than a year old that weren't as tight. The orchestra was simply wonderful as well. Of course, it should have been, considering the show's original conductor, David Caddick was at the baton. (I am pretty sure Mike and I were the only audience members who exclaimed with delight when his name was announced!)

While I have seen better individual Mssrs. Andre and Firmin, both Laird Mackintosh and Craig Bennett work very well together. Though Raquel Suarez Groen's Carlotta and Carlton Moe's Piangi could have been a touch more supercilious, their singing and understanding of the opera styles they are sending up fit the show humorously. I've always found the Giry women to be delightfully mysterious (Madame) and a creepy oddity (Meg), and Maree Johnson and Kelsey Connolly, respectively, keep that tradition impression going. I mean that in a completely positive way. 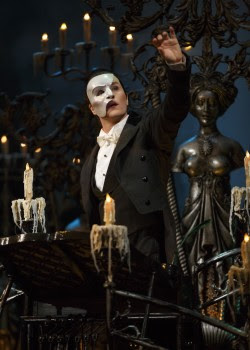 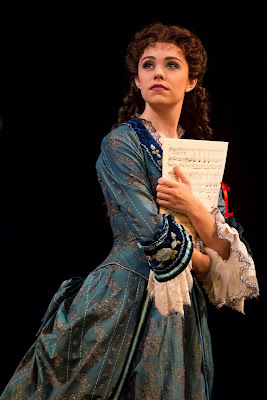 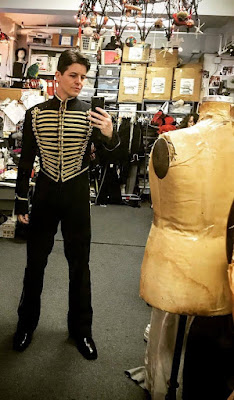 Of course, the success of this show rests mostly on the shoulders of the love triangle that is central to the plot, and here's where the production really shines. Jason Forbach (in for Jay Armstrong Johnson) is a fine Raoul with a lovely voice. He exudes confidence, while also being vulnerable and smitten in an "aw, shucks" kind of way; he is charming.  Ben Crawford's Phantom embraces the show's melodramatic bent in both villainous and sexy way. If he had a mustache, he'd twirl it gleefully. His "Music of the Night" is a study in controlled sensuality, while "Past the Point of No Return" is so sexually charged, I wanted to smoke a cigarette when it was over. We had seen Kaley Ann Voorhees do numbers from Phantom last season in Prince of Broadway, but that in no way prepared us for how she handled the entire role. What a voice! What a presence! And her chemistry with both of her co-stars was palpable, making the love triangle all the more intense. All three skew much younger than previous trios I've seen, and that brings an intoxicating vitality to this gracefully aging Broadway classic.

So glad we made a return visit - maybe we'll be back in another 20 years. It'll still be here.

Labels: Show Review, The Phantom of the Opera