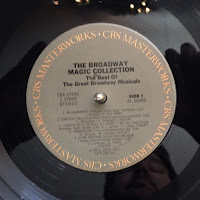 When I switched to CDs years ago, and started replacing my favorite albums, I got rid of my turntable along with of most of my record collection. The only vinyl I kept was a small collection of Broadway cast recordings, mostly for the liner notes and pictures which are much easier to enjoy larger. It seems funny - and it delights me - that vinyl is making a comeback.

Not even a month ago, I was talking about getting rid of them - trying to purge/downsize, etc. Then what did my best friend do? He bought me a turntable for Christmas. I love it. It makes me feel very nostalgic.  The very first record I played on it is the subject of today's blog. 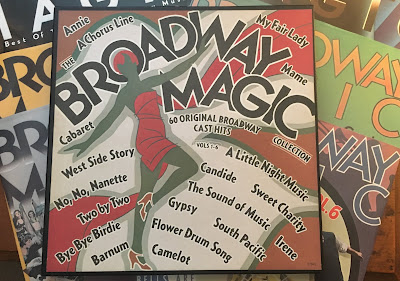 Many Christmases ago - probably in an effort to get me to play anything but Pippin - my parents bought me the 6 album box set of Broadway Magic. Put out by the then-King of Broadway Cast Recordings, Columbia Records, these were a 60-song greatest hits collection from some of the greatest musicals of all time (along with a few flop gems), sung by legends of the Broadway stage. Each album has a theme: The Best of the Great Broadway Musicals, The Great Performers, The Showstoppers, Super Hits, Great Performances and All Time Favorites. And the back of each sleeve has terrific liner notes, too! Columbia put out a second Broadway Magic compilation series, by the decade - 50s, 60s, 70s. 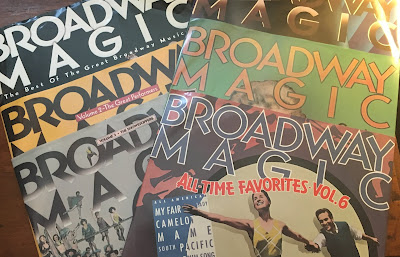 Now I'm all for the amazing sound quality of CDs and digital, but there is a lot to be said for hearing these older recordings in the vinyl platform. Julie sounds like Julie when she sings "I Could Have Danced All Night," and nothing beats Ethel belting out "Everything's Coming Up Roses," both just the way they were recorded. Apparently, I'm not the only one, otherwise, I'm sure there wouldn't be a (rapidly) growing market for them again.

And you know I'm going to get a current show on vinyl sooner or later...